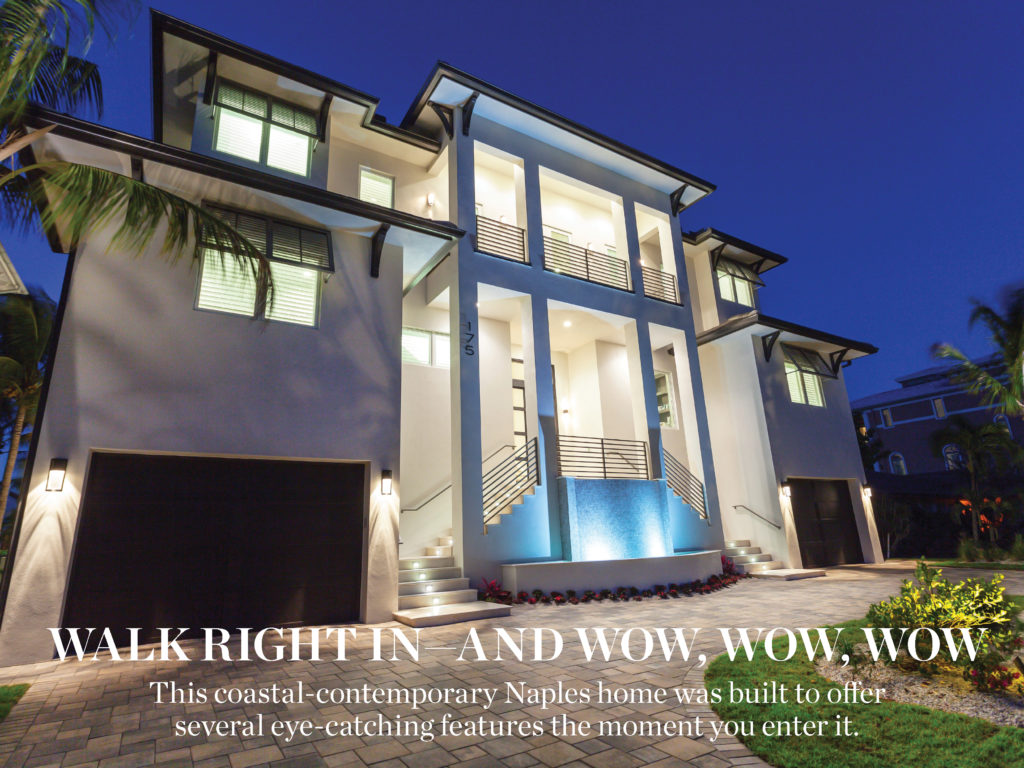 They say the eyes are the windows to the soul. But when you’re the president and CEO of a major window manufacturer, the windows are the soul of the house.

Of course, it helps if those windows are giving occupants a chance to gaze out onto a lovely stretch of Southwest Florida H20, and the new home of Kim and Tim Yaggi (Tim is head of Pella) does just that.

Newcomers to Naples (via Michigan, Kentucky and Iowa), the couple found a perfect four-bedroom, six-bathroom spec home that was being built by Naples Luxury Builders near Vanderbilt Beach. Because little more than the ground level was completed when the Yaggis purchased the home, they were able to put their personal stamp on the project and created a waterfront gem.

“We found this and fell in love with the floor plan,” Kim says. “Each room has an en suite with it, and our kids are in their 20s, so when they come they’ll have their own space. It’s really just as we would have designed it.”

In fact, the only real change made to the specs was that the Yaggis required Pella windows and doors be used instead of what had originally been scheduled. No one could argue with that.

The Yaggis then chose JoAnna Palinchak and Kimberly Bright of Design West to handle interior design.

“They were amazing. I can’t say enough good things about them,” Kim says. “They were my eyes and ears because I wasn’t down here during the build. But I must say they had a really great relationship with Steven (Sunquist of Naples Luxury Builders).”

The result is a coastal-contemporary home that is warm, clean and livable.

“No one has to be afraid to walk in with sand on their feet,” Kim adds. “We just wanted a comfortable home.”

For Sunquist, who designed the 4,700-square-foot-under-air (9,900 square-foot-total) home with designer Antonio Rao of Rao Designs, the home was envisioned to represent his dream home. “I joke with my wife that it was my bachelor house that I’ll never get to live in,” Sunquist says. That helps explain the waterfall out front; the 12-car garage; and the raised waterfall spa flanked by fire features that overflows into a wading pool—which in turn overflows into the main pool at ground level.

“Essentially, we came up with the pool design first and then designed the house around it,” Sunquist adds. “But I wanted, when you walk through the front door, that you’d have three or four ‘wow’ features that would knock your socks off. So when you get to the foyer, you’ll have already walked past the fountain. Then you’re standing in your living room with the three-tiered pool with the two fire features; and the 120-inch linear fireplace right next to that (in the living room); and then the two kitchens side-by-side, inside and outside.”

The end result is a home that not only “wows” but satisfies with comfort and functionality—and is a hit with guests. Just four days after moving in, the Yaggis’ 21-year-old daughter brought 10 of her college girlfriends down for spring break.

“It was perfect,” Kim says. “To me, this is a dream come true. It is everything that we wanted it to be—and it fits our family perfectly.”

Plus-or-minus 10 college coeds. Just how many wows can one house produce?