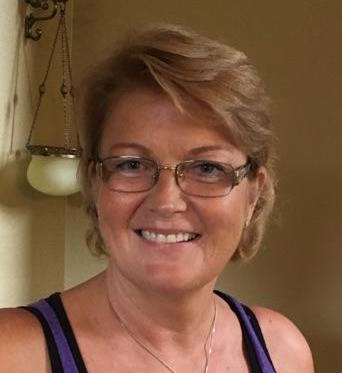 The bell was supposed to be celebratory. But for Karin Petrocelli, it tolled merely a dark and sad reminder of her fate.

“I heard this freaking bell ringing,” says Petrocelli, an Estero resident, thinking back to the infusion room where she received chemotherapy. “People, when they’re done with their treatment, they get to ring a bell. I wish they would take them into a different room or something.”

“I will never be able to ring that bell.”

In May 2012, Petrocelli was diagnosed with stage 4, or metastatic breast cancer. She’d just turned 50, just run a half marathon, and was living under the assumption that breast cancer was a closed chapter in her life. In 2007, she was treated for early-stage breast cancer, had a mastectomy and was told she’d beaten the disease. With a husband and four girls to look after, Petrocelli didn’t look back.

Why would she? Her doctors, she says, never talked about the 30 percent of early-stage patients whose cancer will return in its most deadly form. And when it does, Petrocelli learned, the implications go far beyond the inevitability of death, the sorrow of telling loved ones and the life-altering side effects of the medications.

Women with metastatic breast cancer report a kind of societal shunning, from the organizations that ostensibly work on cancer patients’ behalf to a medical community that neither understands the disease’s course nor the physical/psychological/social toll it takes.

“When they have these (cancer support group) meetings, nobody wants to hear your story because they’re afraid of you. You don’t have anything to celebrate like they all do. You feel very lonely. I like to say I feel like the elephant in the room,” she says.

Ditto for breast cancer walks—all those pink bras and victorious T-shirts. And ditto for those fundraising organizations that focus on early detection, that celebrate recovery, that paint the world pink every October—but that don’t pump money into metastatic breast cancer research. Data compiled by one organization, METAvivor, suggests that 30 percent of breast cancers will metastasize, but 2 percent of research funding goes to stage 4 cancer.

Petrocelli, who’s lived well beyond the typical life span (the American Cancer Society puts the five-year relative survival rate at 22 percent), is not one to be written off. And so, from her home in Bella Terra, she’s pushing to improve the lives of women like her and is planning a fundraising gala this March to generate money for research.

“You can talk to whoever you want—if you can get a word in edgewise,” Petrocelli says in greeting Friday afternoon. Her driveway is packed and her house is teeming with about a dozen women, all of whom have metastatic breast cancer. By the end of this weekend, she will have hosted about 18 of them.

They arrived in Estero from all over the country. Petrocelli met them through Facebook support groups, which had become a sort of lifeline. “I felt so alone, but when I met all these people it was amazing,” she says.

Nevertheless, Petrocelli longed for the depth of camaraderie that only happens in person. Some months ago, she voiced the idea of a retreat. She knew her Facebook friends would be financially challenged to make such a trip, burdened with endless medical bills. To her delight, neighborhood friends and family jumped to make the event happen—offering guest rooms, volunteering transportation, pledging to cook meals. As word spread, others chipped in cash, $900 in all, to help defray travel expenses for attendees who needed help.

As they settled in, the bonds cemented immediately. These women, from far-flung places and disparate lives, had much to talk about.

“It’s really hard—every time you get a headache, your mind immediately thinks, ‘it’s spread,’” says Amy Resnick, who is 62 and lives in Fort Myers. She has inflammatory breast cancer, the “devil one,” whose symptoms are particularly misleading, she says.

Next to her Ann Newell, 52, of Washington state nods vigorously in agreement. She had first fought cancer in 2004 and, like Petrocelli, thought she was clear. In January 2016, she started experiencing pain in her hip. Doctors told her to go to the gym to stretch and strengthen it. It took nine months to get a real diagnosis.

“The doctors didn’t want to believe me,” Newell says.

There was much grousing about the medical community. Resnick had gotten lucky—a primary care doctor, Dr. Debra Black, had immediately sensed something was wrong and sent her for a mammogram. But more generally, she says, there’s a disconnect between doctors and patients.

“The doctors don’t tell you about metastatic breast cancer. The pink ribbon people don’t want to think about it,” Resnick says.

Perla Robertson, 41, of Illinois overhears her and considers the importance of metastatic breast cancer awareness: “The outcome might not be different, but women would be more prepared… And the awareness is important not just for us, but for our friends and family. If our friends knew this was an ongoing thing, the support would be different.”

Indeed. Earlier in the day, Petrocelli handed the group index cards with the question: List five laws you would create stating what people cannot say to an MBC patient. Almost universally, the answers included: “When will you be done with chemo?” “But you look great!” “You can beat this, keep fighting.” “Eat right and exercise and you will be cured.”

These women will never stop treatments, and they will never be cured.

Awareness, the women add, might spur donors into giving and researchers into action. They may not ever see a cure for stage 4, but they’d be grateful to see it subdued into a chronic, controllable disease like HIV.

Talk wasn’t all politics and policies, of course. Throughout their time together, women traded coping strategies, admiring one woman’s eyebrows (“Tattoos!” she informed them); laughing at another’s ever-changing hair color, a playful response to the loss of her locks (the group scrolled photos and voted her current hue, teal, as their favorite); listening to each other describe how they live (Robertson is starting graduate school, cancer be dammed) and how they face death.

On that, Jeannette Ortiz, 43, of San Antonio describes how she approached the subject with her only child, a 21-year-old son. She told him everyone is put on this earth to serve a certain purpose and to accomplish certain things.

“When I’m ready to go, the man will take me. Don’t ever feel bad about the things I didn’t do… I wasn’t meant to do those things,” she says.

The women around her nod with an understanding granted only to those facing the same.

In addition to the retreat, Petrocelli is organizing the region’s first “Metsquerade,” a fundraising gala to benefit METAvivor, a Maryland-based, volunteer organization that gives 100 percent of its fundraising proceeds to metastatic breast cancer research.

The event will take place on Saturday, March 24, at the Hilton, Naples. For information on tickets and sponsorship opportunities, email: [email protected]