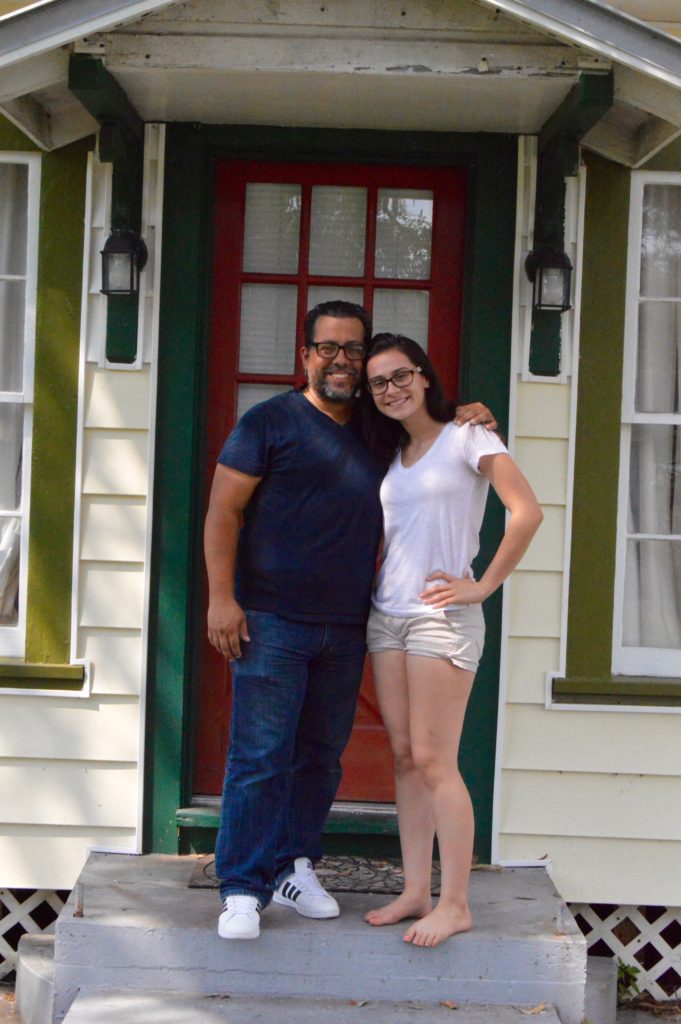 It could have been a movie.

When Irma sent Miguel and Kathryn Cintron’s towering mango tree through the roof of their Fort Myers home, the couple emerged tentatively from the closet where they’d barricaded themselves. (They’d sent their 17-year-old daughter, Isabella, to a friend’s sturdier home elsewhere.) They grabbed their dog, Bear, and the things dearest to them: a laptop and boxes of old family photographs, which had been packed and laid out for easy access in case of the worst.

The worst had hit.

“We really thought the roof was going to go,” Miguel recalls. He and his wife grabbed armfuls of boxes and in Irma’s eye planned their hair-raising escape to Miguel’s sister’s house, two doors down.

“By the time we got out to the sidewalk, the water is knee deep and stuff is flying. We were like Helen Hunt and Bill Paxton in Twister. It’s the craziest scene. I can’t believe we did it,” he says.

It’s a week and a half later, and Miguel is taking a break from the nonstop cleanup project. From the street, the little 70-year-old tin-roofed, wood-frame house looks like it had been spared, like most of the rest of his Fort Myers neighborhood. But from the backyard, you can see where tree limbs punched holes in the roof, and on the inside you’ll find where rain gushed into the dining room and water warped ceilings and floorboards.

The Cintrons’ story is a page in a tome that will be written throughout Florida in coming years—a tale of survival and rebuilding. Cost estimates are still being tallied. One, released this week from Florida International University, suggests Irma’s winds alone created $19 billion in damage, with Lee and Collier counties taking the brunt. Researchers estimate insurance companies will pay out a mere $6 billion of that, leaving homeowners like the Cintrons to shoulder the remaining $13 billion.

This is the kind of news that could well distress this family. He’s an actor and teacher at Lehigh Senior High School. She’s an actress and works for Florida SouthWestern State College’s adaptive services department. Their homeowners insurance carries an $8,000 deductible.

But on this sweltering afternoon, Miguel is decidedly not distressed.

No, instead, he starts a running list of the people who rushed to his family’s aid: the Broadway Community Church pastor who sent a crew to clear debris; the friend who set up the GoFundMe page to help with costs; her uncle who offered the family use of his seasonal home—despite not knowing them; another friend, more of an acquaintance really, who had evacuated to Georgia and who held a fundraiser for the Cintrons in the town in which he stayed; the Lehigh Senior coworker who cooked up a big Italian dinner, the ultimate comfort food; his principal who passed on money that a donor wanted to give to a family in need; his friends at RDS Drywall & Reconstruction who sent over a crew to secure tarps and sheeting until roofers could be hired; and the list goes on.

“I’m so happy,” Miguel says, in a tone that is utterly earnest. “This has been terrible, but you still see people who want to help. Through it all, through the stress, the PTSD, through all of it, what’s been great—what I will take away from all of this—are the people. It’s such an amazing feeling of love.”