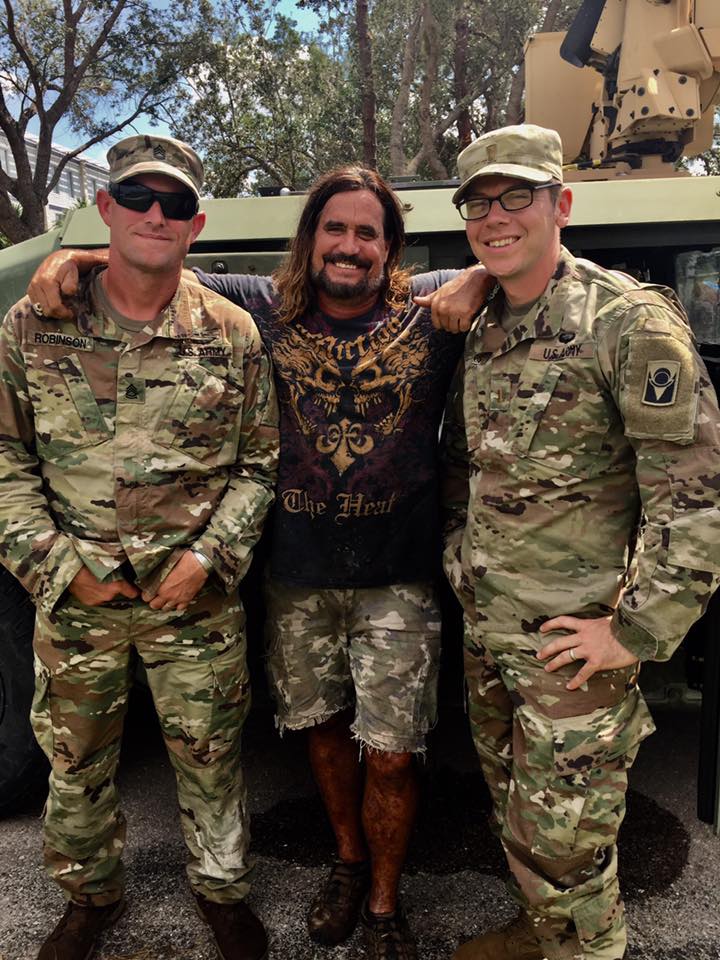 Jeff Hornsby is not one to espouse the wonders of social media. Nope. He’s a latecomer to Facebook and a reluctant one at that.

But earlier this week, taking a break in the backyard of his Fort Myers home, he’s marveling at how social media enabled a grassroots effort to dig out from Irma’s wreckage.

In the aftermath of Irma, Hornsby and his circle and then their subsequent circles used social media as one tool (good old-fashioned word-of-mouth was the other) to find out everything their elderly neighbors needed.

“I’m just naturally protective of my hometown and my friends and my people. We all know each other, and really that’s all that ever motivated me,” says Hornsby, who is 49 and has lived his entire life along the McGregor Boulevard corridor. He’s a self-described “Florida Cracker,” part of that tough tribe that doesn’t whine when the A/C goes out.

Lifelong friends of similar mindsets live along the boulevard, too. A group of them teamed up the very night of the storm, piling into a Jeep and touring their ravaged turf.

“We wanted to see if anyone needed help and to see what the damage was. We started seeing the destruction. It was incredible,” he remembers. The next morning, he put the call out to those who evacuated: “It’s time to come home.” The neighborhood, he told them, needed all hands on deck.

Irma had spared McGregor the predicted storm surge, but she took down what felt like a forest-full of trees: Limbs and trunks blocked roads, buried cars, dangled dangerously over roofs and yards.

Next task? Power up.

In his big black Hummer, Hornsby trolled McGregor helping people fix sputtering generators, which in many cases hadn’t been used since Hurricane Charley. Then, as patches of light came back on, Hornsby started posting messages urging people to pay it forward—to pass on their generators to those still in the dark. He and his friends hauled a “few dozen” of them from one house to another.

Hornsby checked on houses for those stuck out of state, checked on people for worried relatives and kept posting on Facebook to rally volunteers to come to the aid of people around the county, such as the veteran in Lehigh who needed help with trees and tarps or the family in Alva without fuel or water.

Once McGregor was back on its feet, Hornsby, his lifelong friend Hunter Leake and others shifted gears to communities still in shambles.

“We started hearing about Everglades City, and we just decided we would be first ones out there,” he says. A friend who works for the county got them into Hammond Stadium, the National Guard’s staging area. The organization, according to Hornsby, was happy for the help. Guardsmen loaded them up with 2,800 pounds of bottled water and 1,400 pounds of ready-to-eat meals. Meanwhile, Hornsby’s fiancée had held a donation drive to collect everything from clothes to cleaning supplies. Local companies All-In Hauling and Cougar Cutting offered use of a trailer and a donated tank of fuel.

By the time they got to Everglades City, the first Saturday after the storm, donations and aid were pouring in. Hornsby and his companions decided instead to go to Copeland, a bit of a community bordering the Fakahatchee Strand.

“Those folks had no ability to travel 8 miles,” Hornsby says, referring to Everglades City, which authorities had hoped to use as a staging area for all of southernmost Collier. The Fort Myers group connected with a little church, and according to Hornsby, filled it from “the pulpit to the front door” with food, water and cleaning supplies. A week later, an uncle of one of Hornsby’s friends purchased 8,800 pounds of ice and sent it to Everglades City.

Hornsby, for the record, did not seek out attention for his deeds—a mutual friend alerted us at Gulfshore Life to the happenings along McGregor and beyond.

“I think everybody helps out in their own way in whatever their abilities are. Some people send food, some people climb roofs. Some people fix motors. Everybody has their own way of pitching in. What we did was neither less nor greater than anybody else. I like to say we’re just all in this together,” Hornsby says.

And as the storm’s remnants disappear, he hopes the spirit it incited lingers.

“I think that as a community, it has brought everybody together. We’re all loving each other right now. We’re all supporting each other. People are stepping up, and it’s a beautiful thing to see. And wouldn’t it be great if we continued to do these same neighborly deeds that we’re doing now, you know?"