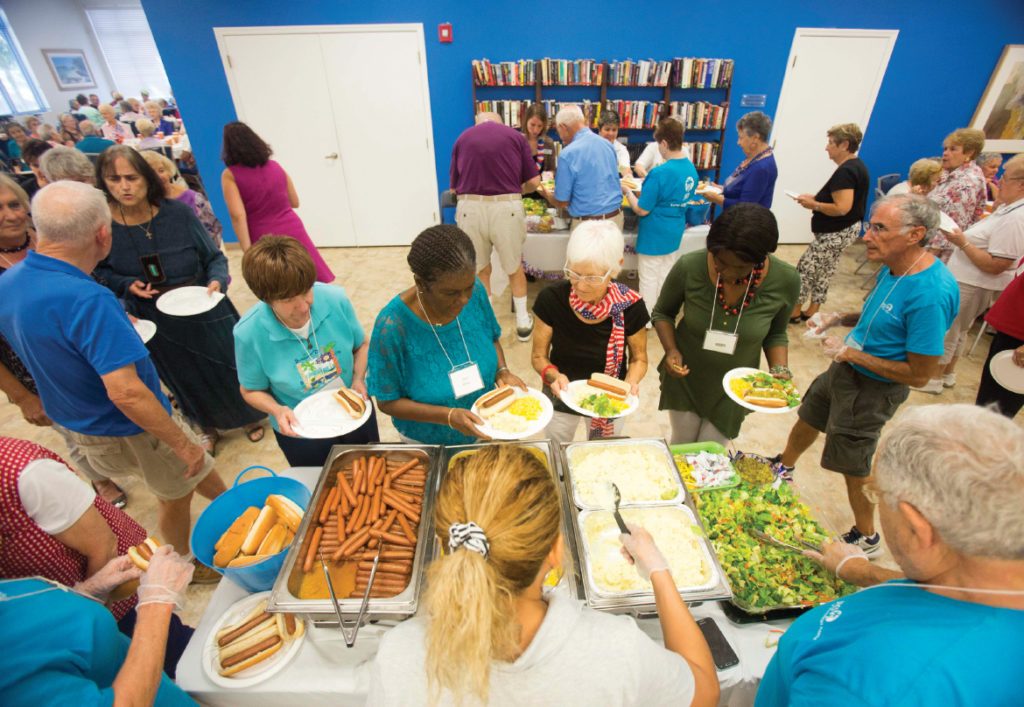 The line for lunch on Wednesdays starts as early as 9 a.m. at the Naples Senior Center. By noon, more than 200 people pack the small space. For some people, this is their one event a week they can get out of the house. Some come dressed in their Sunday best.

There’s a meal from Publix; the entrée is always something healthful, like baked ziti with zucchini. Small talk and laughter fill the air, and once everyone is seated, entertainment will start, typically a musician or a speaker.

It’s about as busy as the center gets, the parking lot overflowing and busses shuttling seniors from nearby neighborhoods. It was the first of its kind in Naples, offering a range of classes five days a week—art to tai chi to computer skills. Since opening in January 2014, it’s quickly found a following of seniors looking for a place to socialize or a place for help.

As soon as the center opened, the nonprofit and nonsectarian organization started to see that need first-hand. Membership (which is $15 a year for those 60 and up) started at 80 people and quickly grew to 1,300 this year.

Paula Price, 67, comes to the center several times a week with a group of friends from her senior-living apartment complex. The lunches (which are free and open beyond the membership on Wednesdays) are a good time to meet new people, she says. Her group particularly likes the travelogue classes, where they screen travel films about exotic locales. “It’s a good way to get out,” she says. “It keeps you young.”

Shortly after the center opened, another need became apparent: dementia care. The center’s dementia respite group now serves more than 60 people; four hours of activity to stimulate the mind in the afternoons (and give caretakers much-needed time off), all run by licensed therapists who are helped by volunteers.

Contrasted to the hustle and bustle of the lunches, the small dementia respite sessions are subdued. The mood is easygoing, as the seniors sing familiar songs, create art, play games or do memory exercises.

One summer afternoon, a game of ring toss is staged—a means to facilitate socialization and work on coordination. The mood is playful. Songs by Chuck Berry, Elvis and Little Richard play on a laptop.

One man is up and promptly misses the first four tosses.

“You got it, kid,” cracks volunteer Rick Erickson. The man loops the next one around a post to applause from the group.

The 10 people in the room are engaged throughout the game, commenting or reacting to the turns of events. Some tap their foot to the music. Caretakers notice changes in mood of their partners after the sessions are done. Catherine Payne had been taking her husband of 55 years to the group after exhausting all other options locally. It’s the right amount of socialization and challenge to fit her husband’s need. His sessions are the highlight of the week—he leaves happy and talkative, which is rare these days. “When he comes out, I have a piece of my husband back,” she says.

The popularity of its services has created a challenge for the center. The demand is even larger than what it can accommodate—about 40 percent of the Collier County population is senior citizens, after all. The 4,000-square-foot center is built out at its North Naples location. A new location would be ideal. The problem is that means a multimillion-dollar fundraising campaign in an area that generally doesn’t prioritize spending on seniors.

Southwest Florida is known for its generosity. Children’s charity is important here. And rightfully so. But when donors divvy up their dollars, the concept of helping a child achieve his or her dreams resonates a lot more than helping someone in the later years of life. “We have a challenge getting donors,” Faffer says. “We don’t have a challenge getting members.”