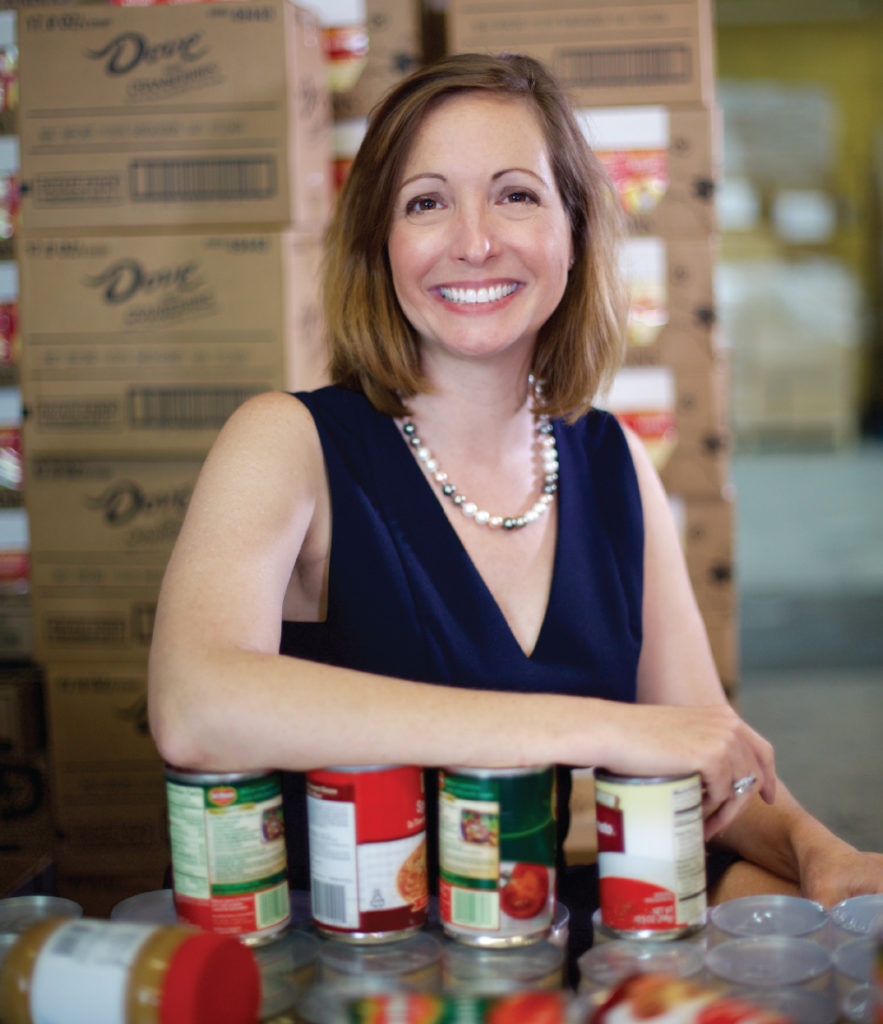 Walk into a warehouse off Corporation Boulevard in Naples and a slender woman in a plaid shirtdress and taupe wedge heels is talking animatedly to about a dozen people in matching green T-shirts. Many wear “volunteer” stick-on name tags. The greenshirts listen to their instructions for assembling one of the main-course entrées that will travel from Meals of Hope to Feeding America-accredited food banks all over Southwest Florida.

The greenshirts file out to the packing area, the woman turns around and standing before a visitor is … actress Anne Hathaway. She has the smile, the shape, the coloring, the hair (before Hathaway’s pixie cut).

Schweikhardt’s acting experience consists of bit parts in two Naples Players musicals while she attended Naples High School. But like Hathaway of Ella Enchanted or The Princess Diaries, she’s the uncomplicated, friendly, family-centered girl next door.

In fact, her whole family is almost next door. On one side of the street 14 houses away in Schweikhardt’s Pinewoods neighborhood are her parents, and across the street from them, her sister Ann Zampogna, Ann’s husband, Carlos, and their children.

The family’s roots in Naples were planted well before they moved to Pinewoods. Schweikhardt grew up in Park Shore with her mother, a middle school guidance counselor, and her father, a lawyer. At 42, she remembers a neighborhood and indeed a city with fewer people and less commerce.

“I am old enough to say I remember when the first McDonald’s opened,” she says early one evening in the family room of the home she shares with her husband, Ben Jepson, and their 12-year-old son, Erik. (“Just don’t name him George,” her father joked when Erik was a newborn.) Accounting for the drum set here and the shelves of signed Florida Gator footballs there, she says this is also the “boy room,” but since she’s outnumbered, “they’re all boy rooms.”

Schweikhardt’s father grew up in New Jersey and her mother was “a beach kid,” she says, who grew up on Fort Myers Beach.

Katherine Ann Schweikhardt was named in honor of her grandmothers, Kathryn and Angeline.

“I’m always the longest name on any list,” she quips. When her parents and grandparents pondered what nickname would emerge, they pinned their hopes on Kate. “Like Kate Smith and her God Bless America,” Schweikhardt says. “They thought maybe I’d be a great singer like her. Well, the truth is, I’m a really enthusiastic bad singer.”

And you get the idea that anyone within earshot would simply smile. With enthusiasm like hers, there’s no need for perfect pitch.

Her zeal shows up in many simple things, like the love of fantasy novels she shares with her husband and son. They’re now reading Jurassic Park. Last Thanksgiving, she says, they all took a Harry Potter-themed quiz to see which house at the Hogwarts school best-suited them. She and her father would have been assigned to Slytherin—“Oh yes, I’m very competitive,” she says.

In fact, it was during a competition that she met Jepson. While both were students at the University of Florida law school, mutual friends organized a paintball outing.

Jepson, who on the evening of our visit has been unloading groceries for the seafood dinner he’s preparing for Schweikhardt’s birthday, stops and comes out from behind the kitchen island to tell the story.

“You have to wear masks and you can’t tell who’s who,” he says. He and Schweikhardt were on opposite teams. “I was the guy who had the flag, and I distinctly remember that there were two people guarding the area (where the flag was to be placed).” He didn’t know until later that one of the two was Schweikhardt. “I shot and just missed her face.”

Schweikhardt smiles at the memory and what followed. “Later I shook his hand and said to myself, ‘I’m going to marry that man.’ I just knew.”

A minute later Jepson laughs and points out the window to the pool area, where one of the family’s three dogs, a rescue Lab mix named Dorrie, has her huge head cocked and fierce-looking teeth innocently bared as she gulps a steady stream of water that’s running off the roof from a recent rain. Schweikhardt looks and laughs, collapsing on the couch at the sight.

Feeding people, for instance. During a walk through the Meals of Hope warehouse, someone worries aloud that the current political climate could add more people to the “food insecurity” roster.

“I leave it up to somebody else to do the advocating,” she says. “My job is just to make people care” about others going hungry.

It’s a departure from legal practice, for sure.

After joining her father’s Naples firm in 2000—and helming it beginning in 2007 when he retired—Schweikhardt was so moved by the plight of one child that she completely switched gears professionally and turned into “the food lady.”

The name eventually came from a boy in the Sunday school class she was teaching who was “just awful,” she says. “He wouldn’t listen. He would run around the classroom and roll around on the floor.

“But we finally realized he was always hungry.” She started bringing him food. About this time, she heard about a job with Harry Chapin Food Bank as Collier County coordinator and “as a lark, I applied.” In the course of interviewing she printed out a list of county schools and the number of free and reduced-price lunches each served. “And I found out that there are 14,000 to 16,000 kids going hungry in this area. And at that moment it became the mission of my life.”

She had volunteered packing food before, but making this a career decision would mean leaving the lucrative legal field for leaner times leading a nonprofit.

“It was the best decision she ever made,” says Jepson, a practicing lawyer himself. “Katie is far too kind and generous for law. What I mean is, you have to be able to detach from it.”

First that life mission played out for Harry Chapin, when she became director of programs and food coordinator for Collier County. In 2014, she took a break and worked directing the United Arts Council of Collier County. But barely a year and a half later, she was back in the food world at Meals of Hope, a program started in 2007 by Naples resident Steve Popper. Although it distributes all kinds of food, the Meals of Hope model is based on vitamin-fortified, nutrient-packed main-course meals—one of beans and rice and one of macaroni and cheese. Now in six states, Meals of Hope has provided nearly 4 million meals in the United States to date.

“Katie without a doubt has a huge heart and desire to feed people in our community,” Popper says.

Schweikhardt is also a graduate of Leadership Bonita Class of 2017, a Gulfshore Business 40-under-40 alumna, and a woman unafraid to enter a charity taco-eating contest.

“I’m the champ! I won! I ate eight tacos,” she says. “I will never be as cool as that evening in my 12-year-old’s eyes. It raised $515 for Meals of Hope.” The restaurant 7th Avenue Social held “Tacos for Change” as a fundraiser in early May.

Add to that list the volunteers and employees at Meals of Hope.

She’s the rare person who continues listening even when you know your story is too long, and who delivers bad news with grace.

Sometimes on her office door at Meals of Hope is her version of a Do Not Disturb sign: “I love you all! But unless you are on FIRE or have $1 million to give me, please do not disturb! Grant writing in progress. Thanks!”

And there’s another little note added as a postscript: “Unless you are opportunity, don’t knock!”

“It takes a special kind of person to be able to be so passionate long-term,” says Donna Carty, who has sponsored several packing events with Schweikhardt and Meals of Hope. “Many people get burned out in that kind of job. Katie lives and breathes it. She’ll do things like live on food stamps for a week. She did. And then she very honestly journaled about it. It ran in the Naples Daily News.

“And she’s done this a couple of times. We in the community are extremely fortunate to have someone with her passion and expertise.”