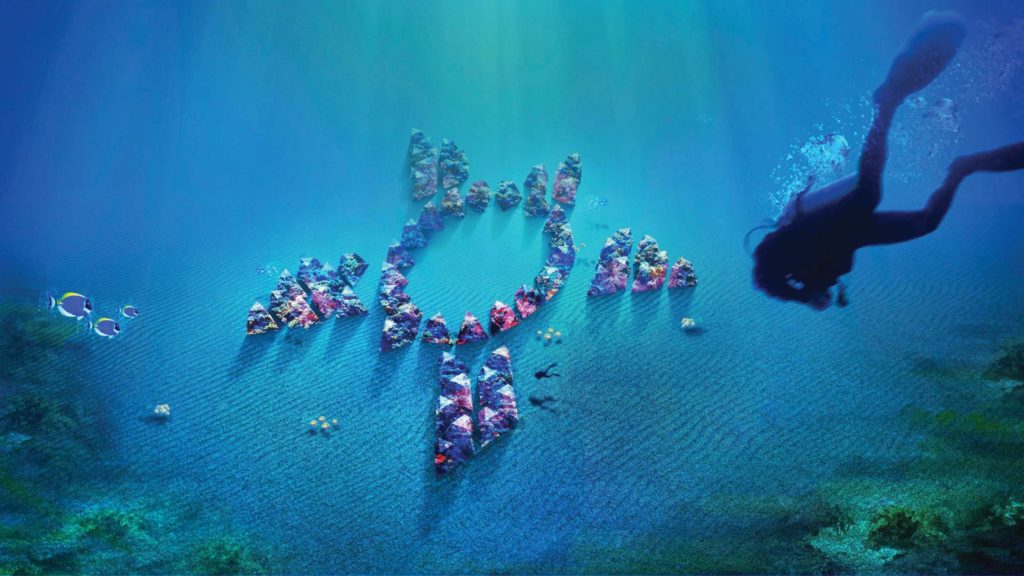 When the seasonal guests go home, full-time Southwest Floridians ramp up, pushing ahead on countless development projects to keep this paradise progressing. Here are a few of the changes you can look forward to.

Over the summer, internationally renowned Italian designer Vito Di Bari created a work of public art—and dropped it into the sea. Di Bari, a “neofuturist” urban planner with a U.S. base in Miami, had learned about Collier’s Paradise Reef project and wanted to get involved. He created the latest of the artificial reefs, a sea turtle-shaped structure consisting of 34 underwater marine habitats. The reef was his first underwater project.

In all, the Paradise Reef project includes 36 reefs located between 10 and 29 miles off of the Naples/Marco Island coastline. Most are now 2 years old, fully developed and swarming with fish. You can get the coordinates for all of the reefs at cfcollier.org/about/vital-signs/the-environment/artificial-reef-fund.

Yup, as of last summer, it’s legal—if you are terminally ill or suffer a serious condition such as cancer, epilepsy, glaucoma, HIV/AIDS, PTSD, ALS or Parkinson’s disease. Lawmakers and regulators are working out the kinks, but dispensaries are kicking into gear.

C’mon, you know it wouldn’t be season in Southwest Florida without a little gridlock. But before you get your road rage on, offer a little cred to:

– The new LeeTran Beach Park & Ride off of Summerlin Road in Fort Myers, offering three bus routes including the beach trolley and parking for as many as 230 vehicles.

– Don’t worry, we left a few built-in excuses for late arrivals. They include a major road project along McGregor Boulevard in Lee County (updates: improvemcgregor.com). In Collier, the Chokoloskee Bridge project is expected to run through April 2018. Traffic is one lane across the bridge with a signal controlling it. The Vanderbilt Drive bridge replacement project is still chugging along, too. Expect detours there until summer 2018.

Downtown Naples businesses have done a shuffle since seasonal residents departed last spring, as Fifth Avenue South continues its redevelopment. Petunias of Naples has relocated to 824 Fifth Ave. S. and increased the size of its boutique; Fantesea, formerly a go-to spot for coastal accents and art, has undergone a metamorphosis and re-emerged as Terra Nova, a women’s boutique. Adelheidi’s, the organic sweets shop, has moved to a new, permanent location on Park Street. Moving onto Fifth are a new restaurant, Sails Restaurant, and the Spice & Tea Exchange, which opened over the summer. Meanwhile, developer Phil McCabe’s project, including his new Fifth on Fifth luxury rental units and retail shops, and an underground garage are moving ahead.

Moving north, the downtown Fort Myers skyline is evolving. Gone is that dreadful pink eyesore, the old Amtel Hotel, which has been stripped down, scrubbed down and gutted and is re-emerging as Campo Felice, a 323-unit, 55-plus residential community. Expect to see ground broken on Prima Luce while you are here this season. That project consists of 220 condominiums in two towers along the Caloosahatchee. The east and west outskirts of downtown are starting to build up, too. The east is Gardner’s Park, a neighborhood slated for a redevelopment project favoring art studios and adjoining apartments. That youthful, urban vibe is taking shape already with the upcoming first anniversary of Millennial Brewing Co. and the attention-grabbing House of Ride Nature, the headquarters of a missionary group that uses proceeds from the sale of surfboards, skateboards, paddleboards and the like to fund its philanthropic work. To the west of downtown, a cluster of whimsical antique dealers have set up shop, along with several fair trade retailers on Bayside Parkway, near Publix.

Lucky you, here during the best of our weather! Both Lee and Collier are boasting new recreational features to encourage outdoor play.

– The crumbling Ann Olesky Pier at Lake Trafford is being fully rebuilt, and it should be completed by season’s height.

– Emmanuel Lutheran Church is building the community a gift: a public park on church-owned land along Oil Well Road. Emmanuel Park will include a multipurpose field, playground and flowerbeds. More amenities may be added later. The park is expected to open around Thanksgiving.

– Thanks to the hard work of the Friends of the Fakahatchee, visitors to Fakahatchee Strand Preserve State Park will discover a new, safer entryway and deceleration lane off of the U.S. 41 entrance. Ultimately, the enhancement project will include a visitor’s center, restrooms, expanded boardwalk and other features.

The City of Fort Myers opened its new Midtown Beach Sports Complex last summer. It’s on landlocked Grand Avenue, but it sure does replicate shoreline conditions (minus seaweed!) with 1,200 tons of sand for beach volleyball play.

No, not of the plastic surgery type (though we have plenty of those, too). A number of iconic Collier County resorts have undergone major renovations and are ready for seasonal guests (or guests of our home-owning seasonal guests). The Marco Beach Ocean Resort just redid its one- and two-bedroom suites and updated its ballroom and pool deck; The Hilton Marco Island Beach Resort & Spa enjoyed a $40 million transformation; the Naples Grande Beach Resort unveiled its newly renovated public spaces; and The Naples Beach Hotel & Golf Club completed a total golf course redesign, done in consultation with the legendary Jack Nicklaus and well-known course architect John Stanford. The course is open for public play as well as for resort guests.

Speaking of hotels: A new 12-story hotel, years in the making, is underway in downtown Fort Myers. Once complete, the Luminary Hotel will offer 237 rooms, a signature restaurant, a rooftop lounge, a culinary theater, indoor and outdoor fitness facilities, a pool, function space and retail parcels on the street level. It’s being constructed next to Harborside Event Center by Centennial Park, where the city plans to erect a band shell.

Basking in the Spotlight

Two regional theaters announced big plans. In Fort Myers, the scrappy Laboratory Theater has purchased the 94-year-old Kiwanis Hall it has been renting for the past few years. That means in addition to wielding scripts, Director Annette Trossbach and her crew will be clutching paint brushes, hammers and most likely gardening tools, too, as plans include creating an outdoor performance space on the shady 1.3-acre property. In the purchase, Trossbach acquired two additional outbuildings—watch for all sorts of new community classes as she and her team create a new education center in one of them.

In Naples, Gulfshore Playhouse has announced plans for a major new theater complex at Naples Square. That means in a couple of more seasons you could come back to find a new 400-seat theater, 150-seat black box, rehearsal space, education center, gardens and galleries—if you help Coury and her team come up with the estimated $45 million to make it happen. Philanthropists Patty and Jay Baker kick-started the campaign with a $10 million matching grant; Coury intends to formally launch the effort this month.