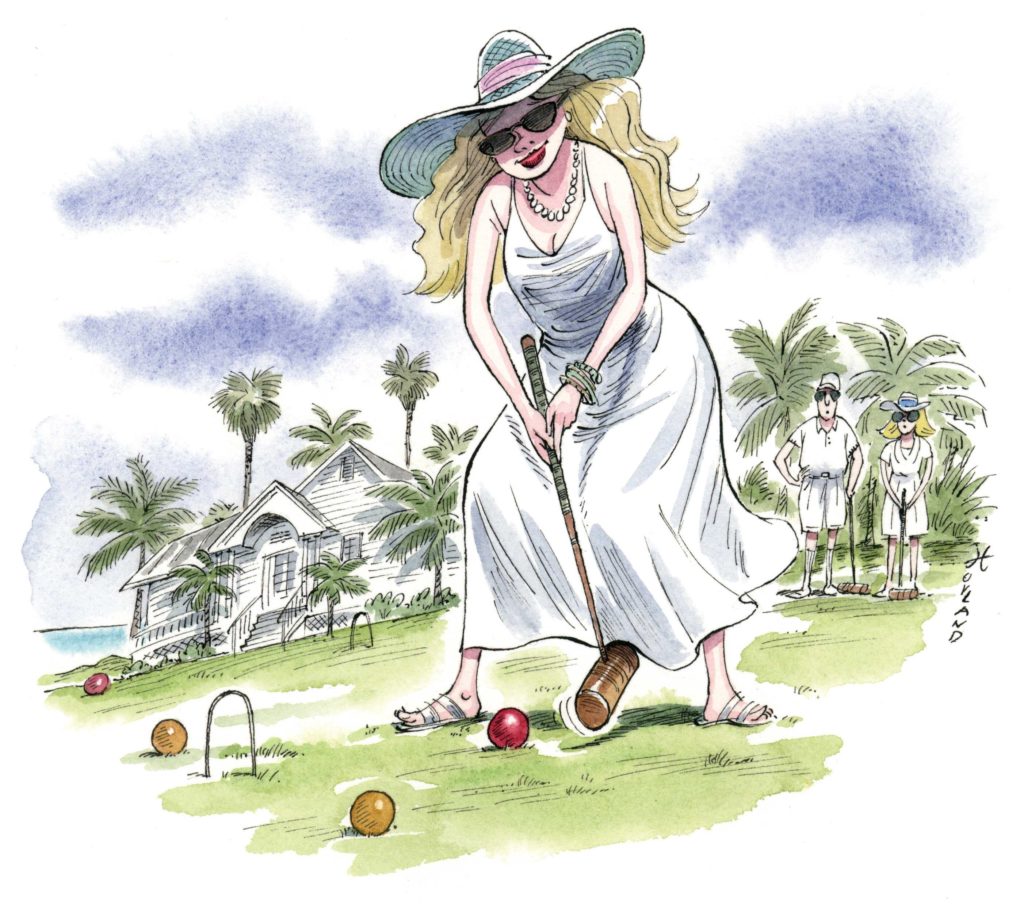 One of the most challenging things about playing croquet in Southwest Florida is actually finding somewhere to play it. If you’re interested in a round of pickleball, you can find a court almost anywhere. Golf, anyone? Our area is covered in courses. If you’ve got a hankering to play tennis, there are plenty of places to play.

Croquet, though? Not so much.

Ms. Adventure has had croquet on her list of adventures forever, but choices are limited. When I started asking around, the overwhelming answer from anyone in the know was that I would have to head to Useppa Island—and just getting to Useppa is an adventure in itself.

A lush, tropical, private island north of North Captiva and south of Boca Grande, Useppa can be reached only by boat. Going from car to boat to golf cart just to try croquet for the first time sounded daunting. But, I was determined to hit a ball through a tiny wicket with a mallet, so off I went.

The first rule in croquet is that players must wear white from head to toe. The look is elegant, crisp, and, most importantly, wearing white on the croquet court is tradition. Unfortunately, due to my habit of frequent food and beverage spillage, I own very few white outfits. In fact, an exhaustive hourlong search through my wardrobe resulted in my only choice: a rather longish white sundress I’d only worn once because it wasn’t particularly flattering. Nonetheless, I rescued the crumpled frock from the bottom of my closet and soldiered on.

Also, playing croquet meant I would have to wake up at the crack of dawn (alas, Ms. Adventure is definitely not a morning person), but my journey ahead was a long one, and it’s always a good idea to play early in the day before the heat index rises to what feels like 687 degrees.

Next, I needed to drive past Pine Island to the Bocilla Marina in Bokeelia where I’d meet Pat Stage (his wife, Rona, runs the Useppa Museum next to the croquet lawn and was helping to make my adventure happen). As I made the turn onto two-lane Stringfellow Road, I was already nearly an hour away from home and running a wee bit late when I heard a siren behind me and saw flashing blue lights in my rearview mirror. Since I haven’t been pulled over in 20 years (and even that was for a broken tail light), I thought for sure the police officer was just trying to get around me because he had to nab a bank robber or something, but no—not in charming, rural Pine Island. It seems I was going 25 mph in a 20 mph school zone. I apologized up and down to the nice officer and explained that I had a boat to catch so I could play croquet on a gorgeous private island. My semi-clean driving record paid off, and he let me go with a stern warning. I was so relieved that he didn’t write me a ticket, or even worse, take me to the Pine Island pokey—it would be just my luck to have a mug shot on record wearing unflattering croquet whites.

By the time I got to Pat, I was a flustered mess. He helped me onto the boat while I rambled on about being pulled over and apologized repeatedly for being late. Finally, Pat, a Florida native with a white beard who has navigated local waters for years, gently told me, “Just relax and enjoy the boat ride.”

So, I sat back, put my iPhone in my purse and chilled out. The waters of Pine Island Sound were like glass. I spotted dolphins playing and pelicans soaring. When it comes to escaping stress, there’s nothing like being on the water. And even though the ride was only around 10 minutes or so, I was totally chilled out and smiling when we reached Useppa.

Besides Useppa being the place to play croquet, whenever I brought up the prospect to friends, many mentioned Sawyer Smith as the person to play croquet with. Sawyer is a local attorney with a home on Useppa, and we’ve known each other for years. He met me on the croquet court after Rona from the museum fetched me from the marina in her golf cart. We were also joined by the wonderful Ginny Amsler, editor of the Useppa Chronicle, and Judith Sear, who has lived on the island since the ’80s. Ginny and Judith told me about the history of croquet on Useppa, which started with Bob Sumwalt in 1978. He was known as the “Father of Croquet” on the little island—he and his wife, Barbara, were early homeowners there, and Bob taught his fellow islanders how to play. Soon, there were tournaments and events centered around the well-manicured court overlooking the water.

Ginny and Sawyer gave me a brief lesson before we started off on our game of golf croquet. First lesson: Don’t be like me and wear a dress—especially a longish one because the backswing of the croquet mallet goes between your legs for momentum. The length of my dress definitely hindered my skills. The other ladies wore white capri pants, and Sawyer wore white shorts. Clearly these folks had actual experience. Rona, a bit of a beginner, played with Judith, and I played with Sawyer. Ginny coached, told great croquet stories and snapped photos of us all.

Golf croquet is just what it sounds like—we went from wicket to wicket trying to get a heavy ball, a little larger than a softball, through very, very skinny wire wickets. Not an easy trick, especially when the other team is trying to thwart your efforts. But, Sawyer was an expert teammate and walked me through every shot. And for my first time out (when my dress wasn’t getting in the way), I was playing pretty well. So, with Sawyer’s excellent croquet skills and my beginner’s luck, we almost had it in the bag for the seven-wicket game until Judith and Rona came from behind and beat us in an exciting sudden-death tiebreaker.

But, playing croquet turned out to be only a part of my adventure on Useppa. After the game, Rona took me across the lawn to the Useppa Museum named after Barbara Sumwalt (while her husband’s passion was croquet, hers was history). And what a history Useppa has. Ten thousand years of Native Americans, fishermen, pioneers, Union supporters during the Civil War and even a CIA training facility during the Bay of Pigs in the 1960s. The tour and displays were fascinating.

Afterward, Ginny took me on a golf cart tour of her beloved island, where I felt like I was with the unofficial mayor. Ginny knows every nook and cranny of Useppa—the Indian mounds, the best views, the most peaceful hideaways and the name of every single person we saw, whether resident or employee. And even though Useppa has only 110 homes, it’s a private club, people play croquet there, and a house will set you back around seven figures, it doesn’t feel fancy. Everyone I met was down-to-earth, welcoming and warm. The day I visited, there was no running water anywhere on the island—and nobody cared. Just a small glitch of private island living.

We all met back at the historic Collier Inn for a delicious lunch. Sawyer talked about teaching his young daughter how to play croquet, Rona chatted about the museum, Judith and her husband reminisced about old friends on the island, and Ginny made us laugh with her Useppa stories.

I didn’t want to leave, but storm clouds were rolling in and I had a 2:30 reservation on the island shuttle back to the mainland. Ginny hugged me after lunch and proclaimed me a “Useppa islander” and welcomed me to the island family.

I’ll definitely be back—but in a more manageable croquet outfit, and I’ll take my time driving. After all, there’s no rush on Useppa. 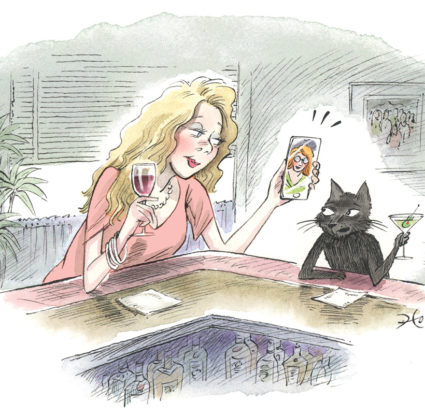 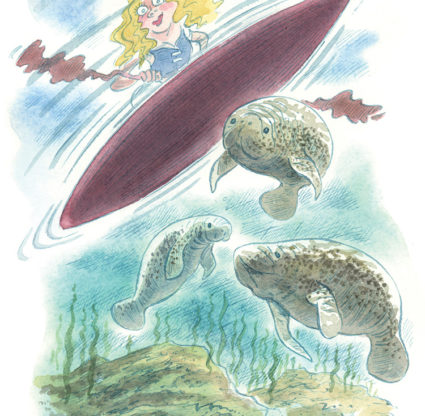 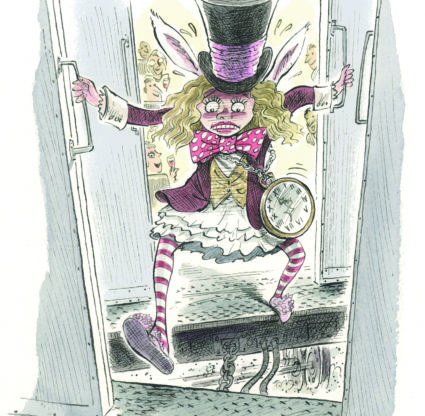