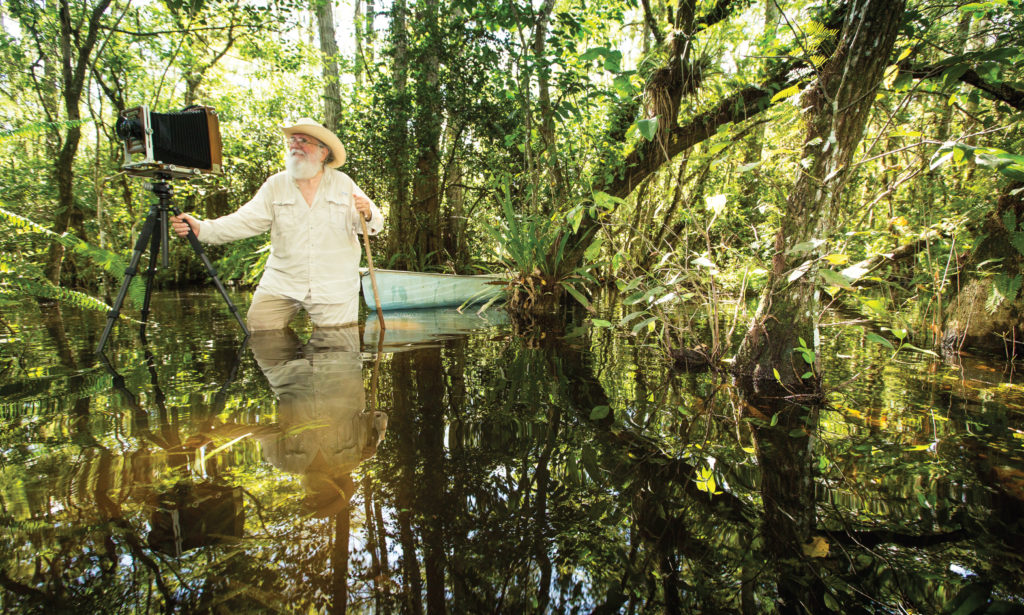 Clyde Butcher sits in a chair on the porch of his house in Big Cypress National Preserve, his feet propped on a red plastic cooler, wearing his trademark cowboy hat with tufts of hair sticking out the sides. His cheeks are chapped red from a lifetime spent outdoors, and he has a wild beard that he says he hasn’t shaved since 1975. (“Why would you shave in Florida? Keeps the mosquitoes off.”) He’s a big man, broad through the shoulders, legs like cypress trunks, and at 75 he looks ready to wrestle a bear. On May 6, 2017, Butcher suffered a stroke that left the right side of his body paralyzed, though you wouldn’t know it to look at him.

“There’s no place like it in the world,” Butcher says.

In addition to the cowboy hat, he’s wearing a long-sleeve outdoor shirt buttoned at the wrist.

“It took me 10 minutes to button my sleeve this morning,” he says. “I was going to button it if it took me all day.”

He settles back in his chair and lets out a heavy sigh.

“This stroke really is a pisser.”

Butcher is considered by many to be the foremost landscape photographer in America today. Aaron De Groft, director of the Muscarelle Museum of Art at the College of William and Mary and former deputy director and chief curator at the Ringling Museum in Sarasota, collaborated with Butcher on the America the Beautiful exhibition at Muscarelle in 2007. The show featured Butcher’s photographs of America’s public natural lands, both in Florida and throughout the United States. In the introduction to the exhibition’s catalog, De Groft called Butcher one of the greatest photographers in American history.

“There’s this long history in American photography of capturing the bigness of the environment, the immensity, especially out West,” De Groft says when asked about Butcher. “Clyde is capturing that but in even the most obscure and interesting places. No one’s really achieving the same quality and clarity of contrast, the same optical splendor. You look at these things, and you just don’t see it that way with your own eye. He’s capturing something that’s almost imperceptible. It’s phenomenally majestic.”

Butcher was born in Kansas City, Missouri, the son of a sheet-metal worker, and his family moved to southern California when he was young. A shy student in high school, Butcher played football and excelled in math. His skills in mathematics served him well at California Polytechnic University, where he trained to become an architect. There was only one snag. He was terrible at drawing.

“Architecture is very competitive,” Butcher says. “If you want to survive you have to be innovative. There was this Japanese guy who was a fantastic drawer. I had to compete with that guy, but I couldn’t draw.”

Butcher’s innovation was to use photography instead of drawing for his designs. He worked with a wide-angle lens for his architectural model shots because it was only in wide-angle views that clients could have a sense for the building design. In 1960 he graduated and began his career as an architect. But then he saw Ansel Adams’ work for the first time. Photography was on the verge of becoming an art form. Most of the photos at the time were for journalism. Not many photographers outside of Adams were taking pictures of nature. With his wife, Niki, whom he had married in 1963, Butcher began spending more and more time in the natural places of California, snapping photographs to sell at art shows. By 1969 he’d started selling his photos full time. Most of his work was out West, in Yosemite and the redwood forests, but in 1980 the Butchers came to Florida.

“I’d been photographing forests and mountains,” Butcher says. “I didn’t see anything to photograph here. Just a bunch of weeds.”

That changed on a drive to an art show in Winter Park in 1984, when the couple stopped in at Tom Gaskin’s Cypress Knee Museum. While Niki browsed, Tom Gaskin pointed Butcher to a boardwalk out back.

“I thought, a boardwalk,” Butcher says. Until that point, he’d never made it far into the Florida wilderness. “The boardwalk was 14 inches wide, and the railing was just limbs nailed together, but I entered the woods and got into the cypress stand of Fish Eating Creek. It reminded me of the redwoods, primeval.”

That primeval feeling stuck with him and eventually got under his skin. Soon he met Oscar Thompson, a fifth-generation Floridian who owned a photography store. Thompson was the first one to bring Butcher into Big Cypress.

“He became my best friend,” Butcher says. “We photographed Big Cypress and the Everglades together for many years. Between Tom Gaskin and Oscar, I started discovering Florida.”

Butcher began shooting in black and white, a dramatic style that leaned heavily on composition and texture. This suited his architectural brain well, not to mention the fact that Butcher is colorblind.

“It’s like having a stroke,” he says. “People can’t imagine it.”

Over the next 30 years, Butcher became the preeminent nature photographer of the state of Florida and was inducted into the Florida Artists Hall of Fame. Today his large-format prints sell for upward of $5,000, some as high as $25,000. He takes most of his photographs using a large-format view camera, a type of camera invented in the mid-19th century that uses a single sheet of film, and he dismisses the trend in photography toward more and more specialized technology.

“Very few photographers know anything about photography,” he says. “They’re equipment geeks. To be a good artist you have to feel what you’re doing. People say, ‘How do you take your photos?’ I don’t know. Everything I do is point and shoot. People will be there when I take it and see the film later and say, ‘That’s not what I saw.’ You have to see it; you have to feel it.”

Photographer Jeff Ripple, who has joined Butcher on photography trips since the two became friends in 1990, describes it this way:

“Clyde sees the world in a unique way. He has a creative vision that separates him from other photographers who may be technically proficient but lack that artistic touch. When we shoot with large-format cameras, when we are looking at a scene in front of us, we are always imagining the final print, the finished result after all the work that goes into making the photograph after we press the shutter. If it’s less than satisfactory, there’s no reason to even take the photo. The amount of time to take a photo is very limited; the light is only just right for a few seconds or a few minutes. You have to find your subject, envision the photograph and then anticipate the moment to make it all happen.”

On his photography excursions across the state, Butcher takes few photographs, sometimes only a single picture all day, waiting for conditions to be exactly right.

“Cigar Orchid Pond took nine years to get,” he says. “One year the resurrection ferns weren’t up. There had to be no wind—there’s a 3-minute exposure on large format—had to have water, not too much sunlight.”

“That’s one of the intriguing things about Florida. You can go back to a spot, and it’s completely different. Tamiami Trail #2 was a wide open field. Now it has bushes everywhere. I just recently went to Myakka for the seventh time. Took one shot all day. I have a certain thing I like. I like an intimate space you can get lost in. I think that’s the key. It’s a lot like being in nature.”

Butcher shifts in his chair and adjusts his feet on the cooler. Sunlight filters down through the trees, and mosquitoes beat against the porch screen.

“We’ve got wimpy mosquitoes here,” he says. “I can take you places where this is nothing.”

On a photography trip to Cuba in the early 2000s, a man walked out of the forest and said to Butcher, “You see all this green? It’s in our hearts, and we can’t live without it.” The same might be said of Butcher himself. He’s an environmentalist—to be clear: a fierce environmentalist—and part of that environmentalism involves photographing spaces that need to be preserved, not land that’s been destroyed.

“I don’t take photos of things that are already lost, manmade stuff, trees cut down to make tract homes. People want me to photograph the bad things. I want to show that things are still there. We have 53-foot cypress trees with the same circumference as a redwood tree, 1,000 to 2,000 years old. There’s an 8,000-year-old saw palmetto up on Lake Wales Ridge, the only place in Florida that hasn’t been under the ocean. There’s so many places, I haven’t been able to photograph them all. Photographers always want to know where the photographs are. They’re everywhere.”

Jack O’Brien, curator of the Naples Art Association who oversees exhibitions at the center, says Butcher’s work has had a lasting impact on the way we approach the south Florida landscape.

“He really got people here to stop and look at the beauty that’s right in our backyard. The Everglades was always something you just wanted to get through, that you didn’t want to pay a lot of attention to. He goes in the water, wades right in, and shoots. That’s the way to see this environment. We have a much more intimate landscape, and he got into it and he encouraged everybody else to go in—either through his photographs or through a swamp walk—to look at the quiet and stillness and complexity of nature.”

Though Butcher is not from Florida, he’s taken it upon himself to defend its wilderness. When he gives lectures on his photography, his tone often turns angry as he rails against overdevelopment and overconsumption.

His photographs are environmental statements, Butcher says, a way of capturing a wild place and encouraging people to protect it.

“It’s not just seeing the photography. It’s everything behind it.”

Since the stroke, Butcher has continued to take photographs and uses a walker to move around.

“I was there this morning,” he says, nodding to a stretch of earth in front of the house in Big Cypress, “waiting on the light.”

He’s also been busy recording interviews with journalists and filmmakers.

“They don’t think I’m going to be here much longer,” he says, smiling.

He’s an easy talker, an extrovert by nature, happy to sit and discuss everything from periphyton to electric cars. After he’s sat in his chair for a while, he stands slowly and ambles to the end of the porch and back.

“Our bodies are so fragile and also resilient,” he says.

He resumes his seat and asks suddenly, “You ever hugged a tree?”

The afternoon is hot and still, the wilderness like a great and steady presence.

“You get an ancient tree and you hug it, you get some interesting feelings from it,” Butcher says. “Some of the trees back here in our yard are 200 years old. They’ve been alive a lot longer than we’re going to live.”