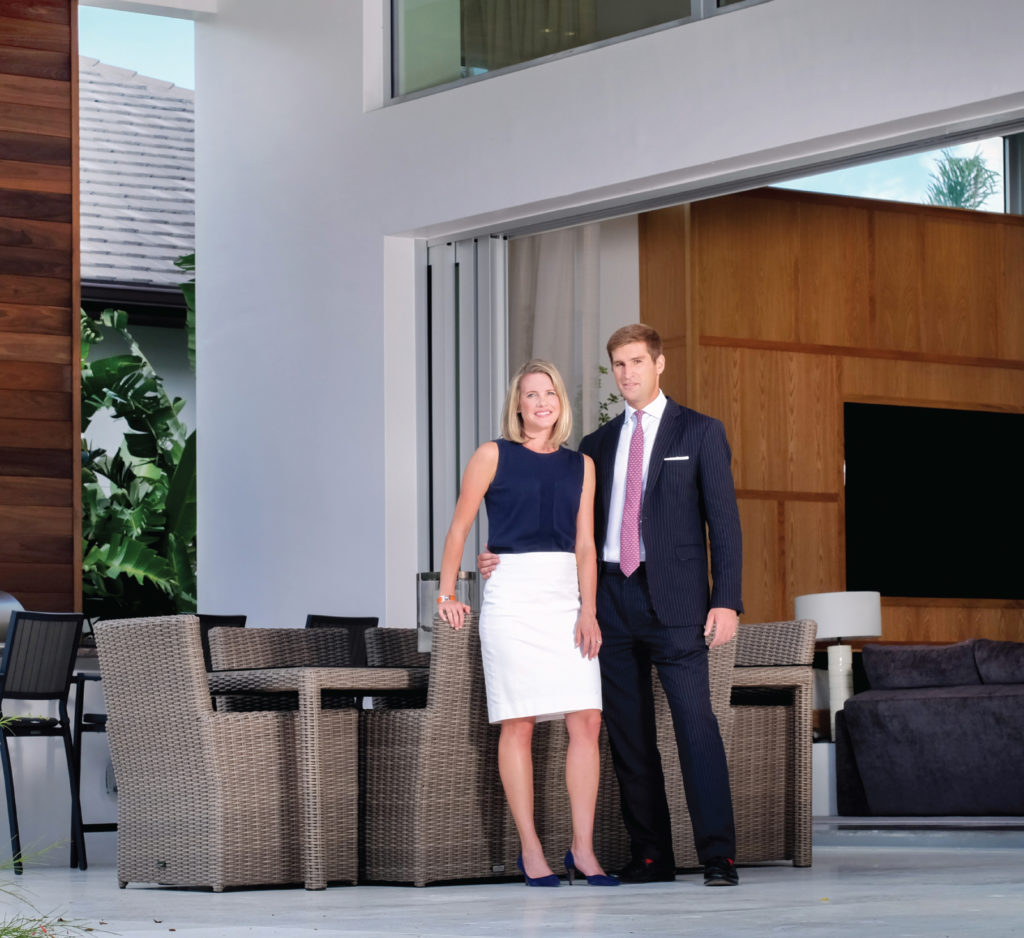 The dream home is no longer a dream. To be blunt, it’s dilapidated. Well, the Naples version of “dilapidated” anyway. The Moorings Park house still had hurricane damage: Tiles off the roof, tree down in the front, palms hanging over the entryway. And that’s not including the non-storm-related repairs that needed to be done inside. But there’s opportunity here—you just have to see it. Put a little money into it—well, the Naples version of “a little money”—and this could sell quickly. That’s what the team at Irby & Associates is thinking.

By team we mean husband and wife Rupert and Karen Irby. They’re the new kids on a very expensive block: Naples high-end real estate. The house represents a big move for the couple. They have a vision for it. The pieces just need to come together.

The Next Big Deal?

For a time, the Irbys let us into their lives as young Realtors trying to pull together deals in the competitive luxury real estate business. They’ve got a unique skill set, as we’ll get into in a bit, and are getting established locally. But the trick is standing out and surviving. So many would love to sell multimillion-dollar homes; so few can actually do it.

The couple never really thought they’d end up in Naples. Karen grew up here, the daughter of cardiologist Dr. Herman Spilker and his wife, Julie. She left to attend college, assuming she’d shed her hometown, and settled in England with a Ph.D. in British literature and a job with Christie’s art auction house in London. There, she met Rupert, a solicitor and certified financial adviser, whose family can trace their English roots back to the time of William the Conqueror. Karen lived eight years abroad, visiting Naples from time to time with Rupert. Each time, the fondness grew. On a particularly gloomy day landing in Heathrow, they decided they needed to make the permanent move. Through Christie’s connections, she met the head of its real estate division. Could this be their way to stake a claim in Naples? After a year with veteran agents Tom Campbell and Richard Prebish, they settled in with their own boutique firm under the Downing Frye umbrella. They figured they worked well as a team: her local knowledge, his penchant for the world of luxury; her eye for design, his mind for deal-making and finance. They focused in on the ritzy neighborhoods—Moorings, Park Shore, Old Naples, Aqualane Shores, Port Royal.

I connected with them in late August 2017 at the Dolce & Salato café on Fifth Avenue South. They’re a fashionable couple and have the upbeat attitude necessary for selling real estate. They’re sociable with a mind for creative deal-making. That’s the fun of it for them. As in the case of the Moorings Park home, they’re energized about seeing through a rough façade and finding a deal inside.

Here’s the dilemma with that house. Buyers don’t want to mess with a long list of renovations when moving into a multimillion-dollar home. “They just want to move into their palace,” Rupert says. This Moorings home, aside from needing some cosmetic work post-Irma, is outdated style-wise. High arches, faux-weathered columns, dark woods. Lots of work needs to be done. Is it worth it? Here’s why it might be. New homes are all the rage. Needless to say, older homes in this area with a drab look aren’t so much in vogue. But there’s a gap in the market. Rupert puts it this way: It’s like going to the used car lot and finding a 5-year-old Lexus with only 10,000 miles. It’s about as new as a used car can get. How can this multimillion-dollar dwelling, listed just under $2 million, get as fresh as a used home can get? This is where their vision comes in.

One afternoon, the couple meets Butch Bacon and Keene Curran from Dominion Contracting Group to go room by room. So much needs to be done to get the look right.

Once you get past the outdated feel, you start to see what makes it special. A large pool area, about as big as you can get in the Moorings, is out back. A nice balcony that stretches the second floor oversees it. It’s got high ceilings and an enclosed bar in the living room. It’s even got a guest wing large enough to be comfortable but small enough so the in-laws wouldn’t want to stay too long, as the couple jokes. The ideas start brewing. Open up the living room with fixed windows instead of bay windows once you walk in. Put a water feature by the bar. The roof should be slate instead of tile. Make it stand out, among the new-ness of the other houses in the area. What should we call this look, the builders ask? Coastal transitional/West Indies, Karen suggests, more as a question than a statement. It’s a start. A vision is forming.

By the end, they’ve got a list. Clear the cabinets. Rip out the wallpaper. Clear the tile. Get a new roof. Replace the windows downstairs. The cost could come close to $400,000.

The following week, they’ll meet with a mortgage company. Then, they’ll head to their clients with a property, a vision for redesign and a plan for financing. It’s not that perfect new dream home. But it’s close. And it may be a good bargain.

That’s the fun part of the job. The hustle, the creative thinking. They left the meeting with the builders riding that energy they get when things start falling into place.

Life as a Realtor can be hectic. You’re at the beck and call of clients and listings all days at all hours. It’s tiring, but there are days when you ride that wave of energy to get you through. Then something like Irma happens.

For a week after the storm hit, nothing moved. Think being too busy is bad? How about not being busy at all. There weren’t even updates on the MLS, the clearinghouse that Realtors turn to for new listings and that the Irbys start their day reading as they would a morning newspaper.

I met the Irbys for coffee again about two weeks after the storm hit. Their top priority was to put positive spin out. Part of the problem is that national media will sweep into the area and focus on the devastation. Then leave. The clients will see the devastation from afar. Then never come. Immediately, the Irbys put out their e-newsletter, showcasing that Naples was indeed standing. And that, at least according to limited data in the past, Naples would see an influx in sales after the immediate lull of a hurricane.

Look at the bright side, they say. The town didn’t get leveled. Damage was less than initially predicted. Many of the newer homes, and even some of the older ones not built with high hurricane standards, fared well. Napes faced a hurricane. Naples survived. Therefore, it’s a great buy. “It seems like this could be a great advantage for Naples,” Karen says.

Always looking for the positive spin.

The couple walks into a pristine-looking house. Karen examines a touch-screen panel near the front door, hits a couple buttons. Lights slowly illuminate the interior. Soft jazz starts playing through the speakers. They work quickly to get set up before the open house starts at 1 p.m.

This is the first open house here since Irma hit. It’s not their listing, but they open it up, as means to meet potential clients able to afford the asking price ($3.7 million). Open houses can be fishing expeditions of sorts, as there’s no guarantee you’ll actually meet a serious buyer. You often have to wade through the gawkers, the know-it-all Realtors, the tourists who claim to be shopping for “a sister” who’s looking to buy. It can be hit-or-miss. But a hit could lead to something big. So, it’s worth it.

The house is unique for Crayton Road. The design is contemporary but subtle, not too cold or drab. The front opens directly into a large living and dining space. It’s got the latest—white quartz counter tops, sub-zero Wolf appliances, limestone flooring, an enclosed glass wine rack that stretches floor to ceiling. The spacious master is downstairs, with three additional bedrooms upstairs.

They slide open the back doors that directly lead to the pool and deck, complete with a chocolate quartz bar. It’s actually pretty spacious for a Moorings home, sitting on .41 acres.

Rupert fans their materials out on the counter—including a book about the home, emblazoned with a logo that’s actually is the Irby family’s English coat of arms. It’s not a one-page printout, but on multiple pages bound on high-quality stock. (Cost: $15 per book.) It evokes “luxury.” (However, it sometimes becomes a rather luxurious coloring book to a visitor’s child.)

Before they can really get ready, they need to deal with the most pernicious part of their day. The sign. The challenge is to place the Open House sign in the right spot (Naples will not like it if it’s on city property and will fine you if it is). It’s often a challenge to get the wires to both penetrate and hold in the ground and, especially when it’s raining, to actually stand upright. Worst case: You’re standing in the rain trying to force it in only for it to fall over as you run back into the house. “It’s probably the only part of the job I absolutely hate,” Karen says.

Thankfully the sign slides into the earth and stays. They’re ready. Ready to wait. Being a Friday afternoon, shortly after a hurricane, makes foot traffic rather slow. They keep glancing out the window, each passing car a potential client until it drives off without slowing. Finally, a half-hour in, a white sedan pulls in.

“Is it a Realtor? You can usually tell,” Karen says.

There’s the “Realtor walk,” a kind of strut of sorts that lets anyone know that you are a master of domains. A white-haired man gets out and starts to walk up the driveway. Yep, Realtor. Actually, one they’ve met before.

The couple’s approach is rather hands-off. Play it by ear. No need to follow everyone around. He explores the rooms, spending time in the master downstairs and glancing through the three bedrooms upstairs, then comes back with questions. They exchange cards. He leaves. A pleasant encounter. Who knows if he’ll bring a client back? At the least, it’s further establishing a business relationship. Over the three hours, only one more person would come.

I meet up with the couple one last time about a month after the storm. Business had picked up again. They were getting a steady stream of people at the open houses. They were working with their client on the other Moorings deal.

High-end real estate is a challenge, perhaps more so than they realized. They’re dealing with discerning clients, often with an understanding of finance or real estate on par with their own expertise. But, if anything, they didn’t realize how much fun it could be. Exploring elaborate homes, meeting interesting people and, when the pieces fall into place, connecting those elaborate homes to interesting people. And, as in a recent sale, sitting on the couch with new owners in a condo that overlooks the Gulf and watching the sun set. It’s satisfying. Until sunrise. Then it’s back to work on the next deal.