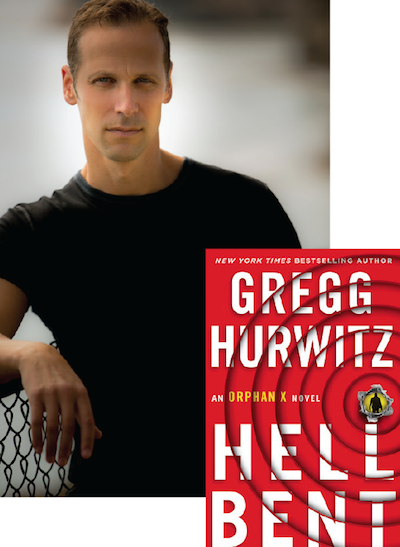 We caught up with the best-selling thriller author ahead of his March 12 visit to the Friends of the Library of Collier County’s 15th annual Nick Linn Lecture Series, this year held at The Ritz-Carlton Golf Resort, Naples. The LA-based novel, comic book and screenplay author is known for his Orphan X series, recently picked up for film by Warner Brothers to star Bradley Cooper; as well as the Naomi Watts-starring movie The Book of Henry; the TV show V; DC and Marvel stories; and more.

You have quite a range. Do you have a preferred medium? Different stories lend themselves to different forms. Books have been the spine of my career. They’re my first love. … For me, novels feel like pole vaulting. They’re intense. You need a lot of focus. They can be scary; you can lose your footing. The other forms feel more like soccer: They’re really fun; they’re collaborative. They’re more manageable. They’re all different lanes, and they suit my different (interests).

With a master’s in Shakespearean tragedy, how did you come to write thrillers? I was always drawn to it, even when I was reading the classics—I love Faulkner. I was always drawn to these themes that were pretty dark. I read a lot of Stephen King growing up. I studied Shakespeare and I studied the tragedies because I loved it.. … But looking back its really noteworthy because Shakespeare really is the original thriller writer. … Thrillers are obviously structured; they’re narrative-driven; they deal with crime. My graduate work was on Othello. Another thing is really delving in the character. Character is everything. What Shakespeare does of course is he embeds all the reasons for the plot and the tragedies in the characters.

What genres do you gravitate toward reading and watching yourself? I can be pretty range-y. I like awards movies and foreign film. I read a lot of nonfiction. I do love a good thriller. That’s the stuff for me. Like, Atomic Blonde for me is like a rat jumping up and down in the pleasure center of the brain.

Can you share some of the famously in-depth research you conducted to create Orphan X protagonist Evan Smoak? The single aim I have when I’m writing a thriller is to give a reader a front-row seat to the action. If I don't go do it myself, it will just be a combination of what others have seen. … If I do it myself, I can write about it in a way that feels real. It doesn't just feel like it's the same tricks.

I shoot every gun that Evan shoots. I did mixed martial arts training. Evan meditates; I do meditation. He drinks the world’s finest vodkas, so I did. I really dove into the world of the character. For years I was almost afraid of it. I kept wanting to write the series, and it kept marinating and marinating because I really wanted to have a character who was distinguished. Jason Bourne, Jack Reacher, James Bond—they’re so differentiated. So I really wanted to think about the traits and attributes that would make Evan really stand out as a thriller hero. … I’m really interested in cutting-edge research. I remember for Orphan X I was reading an article about a patent on a new diabetes drug. And the people take these silicone chips and put a patch behind their ears and the chips register the stomach digestive juice, and the doc’s computer can monitor their blood sugar level. … I kind of appropriated that and pirated the idea and made it that it was a secret GPS thing. You slip it in their drink and then every time they eat you can track their GPS. I’m always 5 minutes into the future.

Would you say your projects are a total form of escape for you and from you, or are bits of yourself and your own backstory inserted into your characters and storylines? There’s a lot of me in these stories. They’re all a piece of me. Even in the villains. Part of it is the bad guy never thinks he’s the bad guy. And so it’s really important to make sure there’s a rationale that's relatable even in the most despicable characters. I have to find this dark part of myself that feels an affinity (for them).

What was your first project? I started The Tower when I was in undergrad. I was 19 years old. And I got super lucky and sold it. I kind of went to England as a stall. … I had no job skills. I did like demolition labor for construction crews and valet-parked cars and once crashed a car in front of an entire wedding party. If I didn't have a career in writing, I would be, like, selling pencils on the street corner. … I basically never had to have a real job. In hindsight it was kind of insane.

Can you begin to choose a favorite or most rewarding project thus far? It’s launching the Orphan X series. I feel like it’s been pinnacle of my whole career. … It took me 15 years to research and find—or 15 books I should say—to find a character I (loved).

What can we expect from your Naples visit? I’m going to juggle flaming bowling pins! No. I always love coming out and meeting readers. There are such good readers in Florida. I’ll share some of the fun research stories, and a lot about Orphan X and (the series’ latest book) Hellbent a little bit. … This book is the most personal mission, his mission of vengeance, and there’s a lot of heart in it.

How did you come to speak in Naples? I go back and forth to Naples a good amount. For some reason there’s a very big reading community there. Which is funny for me, because my grandparents retried there, and I’d visited before. (The library) contacted me to speak at this event. I’m really looking forward to it. Florida’s got a lot of readers, so every couple years I wind up out there.

Learn more about the lecture series at collier-friends.org/nick-linn-lecture-series.