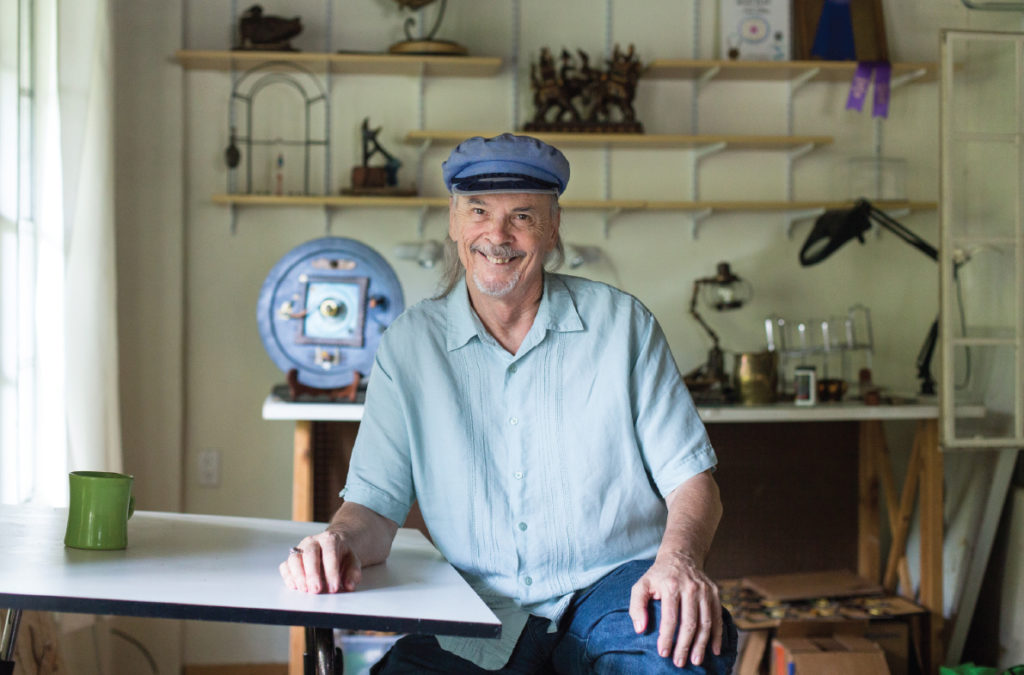 Just because an artwork is made of secondhand materials doesn’t mean it’s second-class stuff. There’s a mysterious alchemy by which some artists turn other people’s trash into treasures. They conjure the forgotten remains of everyday life—the broken toys, industrial artifacts, trampled boxes, frayed cloth, miscellaneous gizmos and doodads—into compelling works of art that tell a tale or express an emotion. “Everything deserves a second look, a second chance,” says Fort Myers artist Dale Weber. “With encouragement, the discarded can reinvent itself on a different level.”

The French have a word for it, of course. They call this type of art “objet trouvé,” or found-object art. Though it’s likely that scrappy artists have always been creative recyclers of the stuff around them, found-object art is largely a 20th century phenomenon. In the early 1900s, artists such as Pablo Picasso and Marcel Duchamp pioneered the use of found materials in their paintings, works on paper and sculptures. One hundred years ago, Duchamp shocked the public by presenting a commercially manufactured urinal as a “readymade” work of art, dubbing it simply “Fountain.” In 1942, Picasso transformed an old bicycle seat and a pair of rusty handlebars into a sculpture of a bull’s head. This bare-bones yet resonant piece is now one of the most famous works in the collection of the Picasso Museum in Paris. During the same era, surrealist artists explored the psychological dimensions of found objects, turning their finds into strange, disconcerting artworks like Meret Oppenheim’s fur-lined teacup and saucer.

Today, scavenged materials are employed by artists around the globe in assemblages and installations that range from the blissful to the notorious. That last category would include works such as Tracey Emin’s My Bed. Made in 1998, that work consists of the British artist’s own unmade bed with crumpled sheets, dirty tissues and other icky personal stuff strewn around it, meant to evoke an emotional crisis she went through at the end of a relationship. Whether you like it or hate it, found-object art has become a well-established mode of contemporary expression, practiced by artists such as the three Southwest Florida creatives profiled here. It often, but not always, has a sculptural quality. Also, many artists cite an ecological motive for making it. With so many objects already around us in the world, they ask, why make more from scratch? Instead of buying conventional art materials, why not use dumpsters and trash heaps as shopping malls, where the only currency required is imagination? And perhaps, now and then, a quick getaway. Or a tetanus shot.

“I like stuff. I like history, I like philosophy, I like comparative religions. There isn’t anything that doesn’t interest me, and that shows up in the art,” muses Dale Weber. He’s lived in the same Tudor-style brick bungalow in Fort Myers since the early 1970s, and its truly eclectic décor bears him out. His tidy living room is embellished with items from around the world, ranging from a Moroccan salt bag to a collection of pre-Columbian artifacts. “My love of history, archaeology, ethnic cultures, diverse philosophies … and the visual appreciation of objects that humbly show the signs of ‘a life well-lived’ are all raisons d’etre [reasons for being] for my art,” he writes.

There’s a brick-lined garage out back, where Weber constructs what he calls his “dimensional collages.” He proudly shows off a collection of glues that occupies several drawers plus a cabinet in his work space. His favorite is an industrial-strength adhesive, but Weber says he also carries a tube of instant glue to his exhibit openings, just in case a last-minute mishap occurs. His intricate works are painstakingly assembled from a lifetime’s worth of stuff picked up in unglamorous places—along roadsides, in parks and construction dump sites. “Suddenly, these pieces of refuse take on a new life,” he explains. “You’re entranced by the thing and you don’t realize you’re looking at junk. That’s part of the fun.”

Weber’s Cosmic Clock, made in 2013-14, is a carefully crafted rumination on the nature of time. Its base is the serving wheel from an old lazy Susan (“it was too lazy to turn anymore,” the artist chuckles), painted a celestial blue and speckled with white stars. This haunting assemblage suggests that time is a tricky thing, both a scientific construct and subject to human perception. Time can seem to pass speedily or slowly; this is indicated by a pair of toy wings near the top, garnished by a snail shell picked up in Weber’s own backyard.

At the center of the assemblage, a backward clock face encircles a series of metal gears, intimating that memory has the power to, well, turn back the hands of time. Speaking of which, those hands are literally attached to the piece, holding symbolic attributes. The hand of a male doll proffers a key, to which there is no corresponding lock. “We are always seeking answers,” Weber explains, though the questions themselves may be unclear. Across from this, a female doll’s arm is attached to a series of gears. It winds the mainspring of a clock, suggesting the mechanical, measurable aspect of time. At the bottom, two baby-doll hands hold a pair of die, pointing to the role of chance in how time’s passage is experienced.

“I let the material lead me,” Weber says. “How I start creating is visual. I see texture, shape, color, something that visually excites me. I look at the object and say, ‘What can I do with it?’ I work visually, but halfway through, something will ring a bell in my head. Maybe it relates to something I’ve read or a bad pun. The piece eventually comes to have a psychological dimension, or it tells a story, or it makes you smile. I think I get most of my enjoyment from taking virtual rubbish and transforming it, using the principles of art, and recreating it into a statement.”

“I’ve always been interested in texture and layering,” notes Naples artist Tanya Trinkaus Glass. “For example, in New England, there are a lot of older houses, and when the paint peels, you see the layers and layers of different colors underneath. I’ve always thought that was really fascinating. It shows history and character. It shows all these people have lived there, that there was a lot of life that you may not see at first. But it’s there. It’s kind of mysterious and hidden.”

In addition to painting vibrant acrylics and pastels, Glass makes delicately layered collages that incorporate bits of lace, tissue paper, old photographs and printed matter. She’s also in the habit of picking up things like leaves and seed pods on her outdoor walks, so natural elements find their way into her work. “I think everything most artists do is a little bit autobiographical,” she says. When she moved to Naples more than a dozen years ago, Glass was struck by how different the light is here, “and I had to learn to paint palm trees,” she adds with a smile.

Some of the bright airiness she sees in her Florida surroundings is expressed in her playful found-object collage Old Painters Never Give Up, created in 2016. It started with some old, dried-up tubes of watercolor paint that she happened across while organizing her studio one day. She arranged the tubes in a horizontal band across a piece of stretched canvas and liked what she saw. Then she decided to expand the watercolor reference by painting a colorful watercolor abstraction on paper, which she tore into pieces. She placed the shards of paper across the lower half of the canvas. Up at the top, Glass added a jaunty line of painted teabag labels, with their strings dangling. The tea leaves had been used for texture in an earlier collage, she notes. Below this band, she placed a line of small paper stars picked up off the auction tables at a charity event. Finally, feeling as if the composition was a bit too structured, Glass arranged some loops of dried grasses atop everything. These strands create dancing, twirling lines that animate the whole piece.

“When I create art, I usually am more interested in design and balance, texture, line and color, than in some mythological story,” Glass says. “Some people are interested in political elements, but I’m not. It’s an escape, I guess,” from the vexations of the outside world, she concludes.

It’s a good idea to wear closed-toe shoes when visiting the studio of metal sculptor Jim Krieger. A careless visitor might stumble over the sharp odds and ends of metal and heavy-duty industrial objects that he collects for his work. Formerly a seasonal resident of Naples, Krieger now lives and works in Fort Myers. There, a metal shed in his backyard holds a little bit of everything, including a stout coil of rope that looks as if it could tether an ocean liner to a dock.

Found materials have been a constant in Krieger’s art for most of his career. When he started working with steel in the early 1980s, he recalls, he gravitated to scrap metal. By the late 1990s, however, he began to incorporate more diverse substances into his sculptures, things like tar, roofing tiles, metal flashing, burlap and assorted bric-a-brac. He was influenced in part by Italian artists from the Arte Povera movement, who used humble materials to make art. Today, friends often bring him intriguing objects, usually things with a well-worn feel, like yards of yellow striping pulled up during a road repair project or the amorphous blob of melted metal that stars in Krieger’s recent assemblage sculpture, titled Icon.

“It was kicking around here in the studio for a year or two and I started to realize, ‘Wow, that would make a really good Madonna,’” Krieger remembers about this inspirational blob. He painted it silver and gradually began to assemble things around it until it came to him that he was reimagining the format of a traditional painted altarpiece. In European art from late medieval times through the Renaissance, this type of altarpiece usually had three main parts: a central devotional image with two flanking wings picturing saints and donors.

In Krieger’s Icon, however, the painted wings have been replaced by two rattan armrests from a battered couch found in his current home when he and his wife, Ricki Moss, moved in a few years ago. Lending an ecclesiastical air to the assemblage are lengths of picture framing that form two crosses, one upside down, in the center. The composition is anchored by a section of metal railing that brings to mind the arched windows of churches and cathedrals. The finishing touch to Krieger’s ironic altarpiece is an outdated flip phone given to him by a friend. It’s a Virgin Mobile device—perfect in reference to his theme and the perfect icon for our technologically obsessed culture.

“Usually, a found object is the impetus. It’s almost always the starting point for one of my artworks,” Krieger explains. He becomes fascinated by the shape or texture of an object, and begins to follow a slippery path of associations and visual memories as he builds a work around it. “It’s really just taking images from memories and processing them through the material into something more contemporary.” 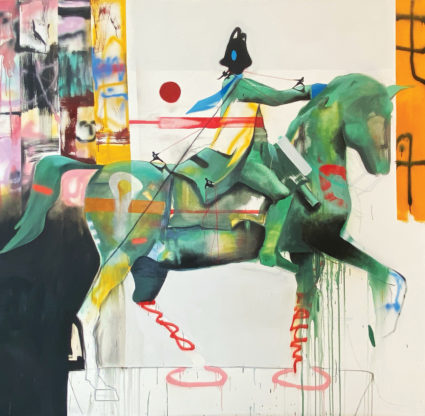