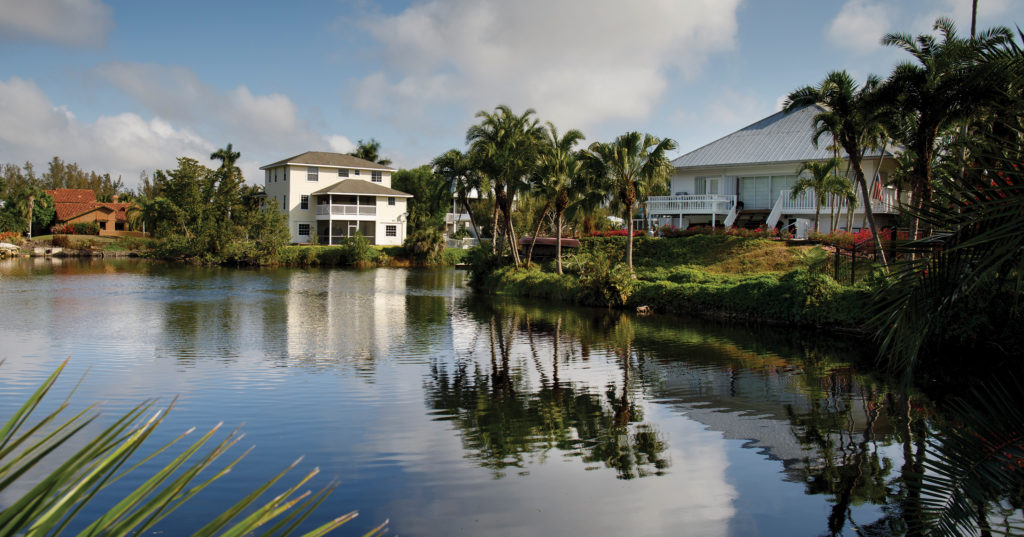 Children’s stories are rife with magical entryways hidden in plain sight (Platform 9 ¾, anyone?), but we’ve stumbled upon a real one, too, a road off of U.S. 41 in south Fort Myers.

At its junction are a tire and auto shop, a veterinary clinic and a water systems place—a perfect commercial masquerade. Hendry Creek Drive is squeezed in between the buildings, a two-lane road marked with an unobtrusive blue street sign. Cars speed past, drivers unseeing. But if you’re lucky enough to find it, you’ll turn west and head straight ahead, noticing first the yellow road sign with tractor insignia and then the parcels of still-undeveloped land and then the entrance into Hendry Creek, a neighborhood of 73 homes that is arguably unlike any other residential community in Southwest Florida.

“Nobody knows it exists,” says Laurie Johnstone, who has lived there for 18 years. She stumbled upon it from the back of her then-boyfriend’s motorcycle. They’d met online, and Johnstone was visiting him and touring his Southwest Florida to see if both felt right. She married him and bought the house, the one with the sweeping front lawn and creek-side views that she’d decided she couldn’t “live without.”

The neighborhood was developed in the ’80s before environmental rules might have regulated the construction along the waterfront, says Johnstone, a Realtor. Even if strident building codes didn’t exist, the developers at the time seemed to honor nature. The houses look as if they sprouted organically along the creek; the yards are big with lots of foliage, both hand-planted and naturally occurring.

The headwaters for Hendry Creek originate at Lakes Regional Park, a few miles north. The neighborhood, Johnstone says, is a peninsula, shaped roughly like a “V.” The creek is deep enough for small boats; if you follow it far enough, you’ll eventually wind up at the Gulf.

“The stories hold that you could get the shrimp trawlers up there many years ago,” Johnstone says. These days, though, you’re more likely to see kayakers or the occasional JetSki, as the creek hasn’t been dredged in a long time (a good thing for residents, who say the neighborhood remarkably doesn’t flood). In addition to the creek are two deep lakes where morning mist lends an air of mystery and where afternoon breezes offer relief from Southwest Florida’s heat.

Living along the water means living with various critters, furred, feathered and finned: osprey, hawks, bald eagles, pileated woodpeckers, herons (great blue, tricolor, white and green), armadillos, gators. Even bull sharks have been spotted. The otters are among the neighborhood favorites, and so are the ibises, which regard the creek as a commuter route. Every night, just before sunset, they fly home to Lakes Park, turning the sky white.

“The largest snook that I’ve ever caught, I caught right here,” says longtime resident David Newman. “It was 42.5 inches. That’s a big snook.”

Sitting on his pool deck one breezy afternoon, which overlooks a wide span of the creek, he pulls out his phone and scans through hundreds of photos he’s shot in and around his yard. “I’ve photographed just about every kind of water fowl you can imagine,” says Newman, who is regarded as the neighborhood naturalist. Once, last fall, a turkey waddled up to his front door.

He crafted a little island out of naturally occurring materials that’s tethered to his backyard shoreline and offers habitat to critters like the turtles that are sunning themselves while we talk. His property teems with botanical life—he estimates he’s planted some 300 species, with a special affinity for bromeliads (he showcases some 80 varieties) and fruit trees, including his “Big Jim” loquat that produces the oversize fruit and a mango tree from the Philippines.

As versatile as the wildlife are the housing types. Lots were sold individually and homes custom-built: There is everything from the Mediterranean-style manor to an uber-contemporary one-story under construction. There’s a place reminiscent of a mountain chalet (at the end of the driveway stands a fish-shaped mailbox); a columned house that looks like a Southern plantation; and the handsome two-story with the awnings, whose owners, it turns out, are in the business of such customized canvas goods.

“It doesn’t feel like a typical Florida neighborhood,” says Andrea Trank. That’s what drew her to Hendry Creek when she came down from Virginia looking for a new home closer to her aging parents. She needed variety. And she needed trees.

“It’s got that feel, an Old Florida feel, established and quiet,” says Trank, who along with her family will mark 10 years there this summer, on her little cul-de-sac named “Heaven Lane.” Trank runs a home business there, crafting custom jewelry, selling essential oils, offering health counseling and teaching small group yoga classes on her second-story deck, overlooking the pool and a thicket of those beloved trees. It is, well, heavenly.

After Trank’s class one morning, Gina Nau, a frequent attendee, showed off a favorite spot: the wood deck on the banks of a narrow and shady portion of the creek. She calls it her “lagoon.” Nau and her husband, who are in their late 60s, bike and walk the neighborhood daily—or they did, until recently when they decided it was time to downsize to a smaller place elsewhere in south Fort Myers. “It’s just a very connected, friendly, caring neighborhood,” Nau says of Hendry Creek. “The children, and the teenagers, whenever I pass them, they greet me, ‘Hi. How are you?’ That’s really rare. They do it even when they’re in their little groups.”

She’ll miss that connection, she says.

Speaking of children, the neighborhood has dozens of them. “I grew up here in Whiskey Creek. When I went to build my first house, I wanted to re-create that setting,” says Jaime Weisinger. The father of two wanted to raise his kids in a similar environment, a non-gated, traditional neighborhood with customized homes, rather than the planned communities that dot Southwest Florida. “This is a secret, little hidden gem.”

Around the corner, Debra Sanford sips coffee in her golf cart after seeing her youngest off to the bus stop. She and her husband, Ron, snagged a repossessed property here 22 years ago—the columned house—and renovated it a little at a time while raising their three children. “It’s just peaceful,” Sanford says.

One Sunday morning in February, Trank sends a text message that well defines what it means to live in this little community hidden in plain sight: “This weekend is the North American bird count, and my husband and I and another birder in the neighborhood were out there counting bird species. We counted 26 distinct species so far. Our neighborhood is truly a natural paradise.”