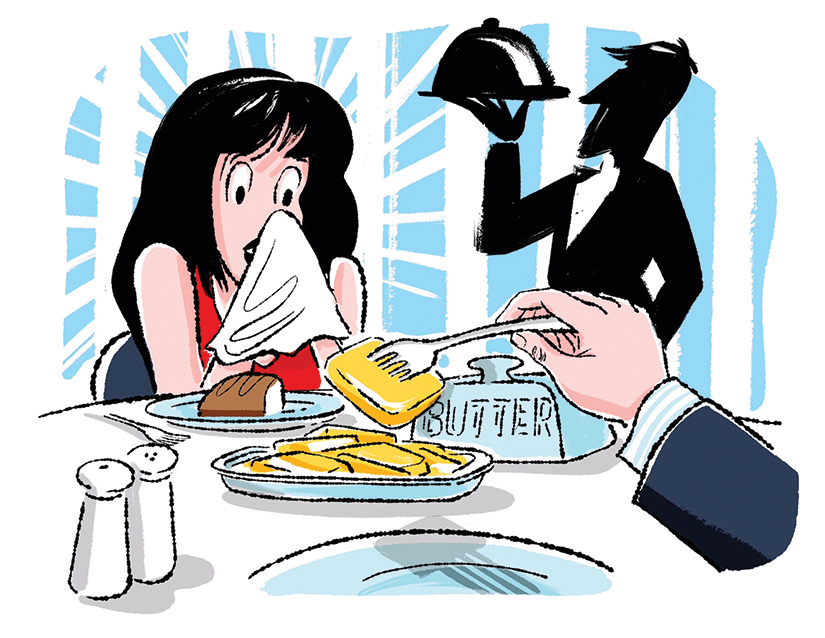 I was on a date the other night, and the guy I was with stabbed the butter with his (used) fork instead of using a knife. I was so grossed out that I wanted to walk out on him. I sat in silence the rest of the night. He later asked what was wrong, and I didn’t want to tell him. He thought I was rude for being quiet. I can see why he is single. What should I have done? — Becky, Naples

Let me take a stab at grading you two when you’re acting like schoolchildren. He’s boorish and, worse, unsanitary. A failing mark here. And your petulance and passive aggressive silent treatment earn you a C (for “could be better”). It’s obvious that this isn’t going to be the man of your dreams based upon your reaction to this, but don’t you think it’s better for you to be the classy one? Maybe, in a nice way, you could point out that his act was a bit off-putting. You don’t have to butter him up, but being honest and respectful about it might help him on his next date—obviously with someone else.

I arrived at a very prominent social gathering for a big charity in town and noticed that another woman was wearing the EXACT same dress. I was so embarrassed. One friend pointed it out and laughed. I know she was just joking, but I thought it was rude, and it hurt my feelings. I wonder how many other people were making fun of me. My night was ruined. Was my friend wrong for laughing? — Cassandra, Naples

What about all the men in dark suits and similar ties? Does anybody get tied in knots about that? Laugh pleasantly about the coincidence and step around with confidence. The party is more about the charity and the people you meet than your fashion statement, and I doubt all the attendees were gossiping about—or maybe even noticing—the two of you in the same dress. Sure, your friend could have been more sympathetic, but if you can’t shake your sensitivity about this, then next time get a dress designed just for you.

My sister passed away last year and left her money to me and my brother (equally divided). I found out that my money is in a trust and my brother’s was given directly to him. Now, I’m angry. Why did mine go in a trust? I want to yell at my brother, although I don’t think it’s his fault. What should I do? — Richard, Fort Myers

Be grateful, not hateful. What’s such a big deal about a trust issue between siblings? Your sister was thoughtful and gracious in setting up an even split for you two. She could have put the money in a trust for a charity—and then how would you feel? Honor her memory and generosity with the largeness of spirit that is just the right thing here.

Have an etiquette question for Suzanne? Fill out the form below.