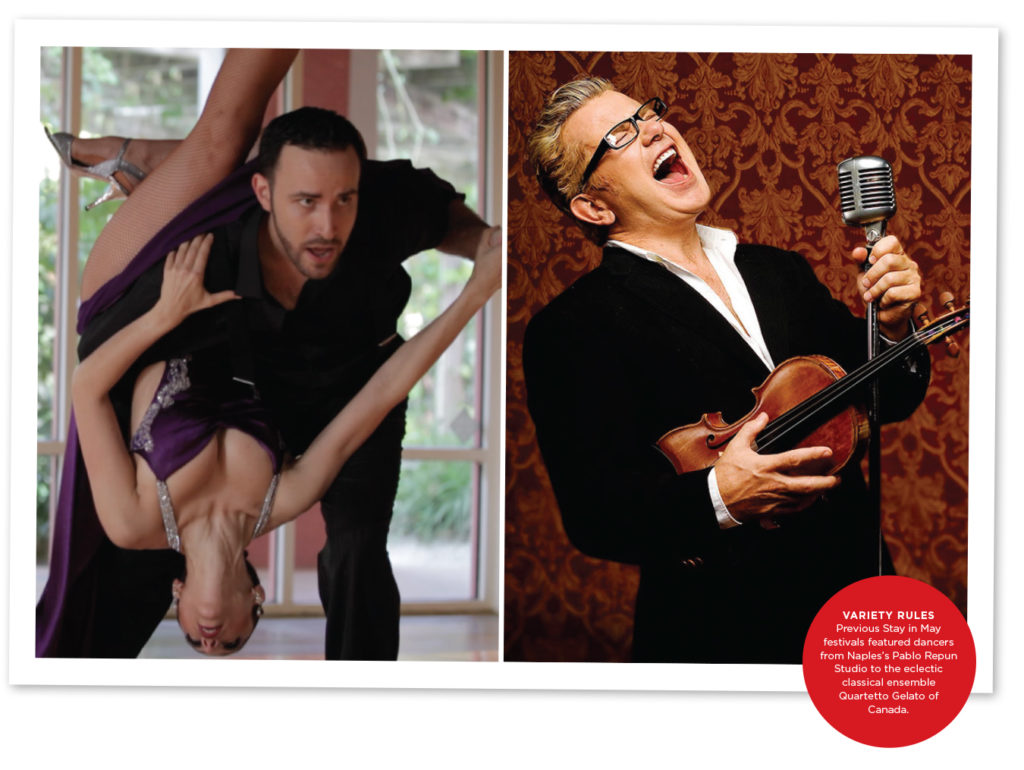 When you’ve got a good thing going on, why not keep it going? Season in Naples—that calendar-filling explosion of artistic, cultural and social events—is that good thing, and Neapolitans have figured out how to extend the fun for just a little longer.

The seventh annual Stay in May festival is underway, highlighting the region’s most gifted residents while importing internationally recognized talents—and, yes, giving snowbirds an excuse to delay their returns and travelers a reason to book an off-season visit.

“On any weekend (in season), there are 500 things to choose from. Once season ends, there’s not,” says Claudia Polzin, the festival’s development director.

This year’s offerings range from concerts spanning musical genres to health and wellness seminars to visual arts presentations to culinary showcases to a short film fest—a collection of events designed to appeal to multiple interests and age groups.

The festival was not always quite so eclectic. It originated under a different name, ArtsNaples World Festival, and focused on country-specific or regional themes—Russia, Latin America, France, Italy—with a heavy emphasis on the classical arts. But that tight focus limited programming. Not to mention, a certain organization in town changed names (Artis—Naples, ArtsNaples), and the festival directors decided to adopt their “Stay in May” tagline as their title and avoid the discomfort of a cross-town dispute.

This festival, after all, is about a lot of things, community collaboration chief among them.

“One of our taglines is, ‘We don’t own a building and we never want to own a building,’ which makes a lot of people in town very happy,” Polzin says. “We form partnerships with existing nonprofits and bring the arts to some unusual locations around town.”

That means festival-goers might catch a concert at the Naples Zoo at Caribbean Gardens or watch artists sketch in the Norris Gardens at the Naples Historical Society’s Palm Cottage or tour the ever-growing Naples Arts District, home to more than 45 studios.

It’s a way to lure people—residents as well as vacationers—into places they might not have visited otherwise.

“We do have (festival-goers) who have said, ‘I have passed here many times before but I’ve never stopped in,’” says Naples Historical Society President and CEO Elaine Reed, whose organization will mark its third year as a venue. “We will have artists and musicians in select areas of the gardens, and people can stroll and enjoy the gardens while watching the artists at work.”

Related: Stay in May 2018 Schedule

As the festival evolved, programming creativity became a hallmark: Jazz legend Arturo Sandoval, best known as a trumpeter, performed here on the piano; a culinary event showcased not the region’s already-famed chefs but its emerging talents—teens who are studying under master teachers at area high schools; Michael Barone, host of American Public Media’s Pipedreams, led a 200-person caravan on an “organ crawl,” because Naples, yes, does have that many pipe organs. (The student chefs and Barone will be back for repeat performances this year. On the organ itinerary is the new $2.1 million, 3,485-pipe masterpiece at Vanderbilt Presbyterian Church.)

“It’s not just another offering you would see in season,” says festival Chairman and President Trey Farmer. “A lot of the programming we’ve been doing over the years is also about challenging the norm.”

That philosophy has led to some interesting pairings, such as last year’s concert by the Tokens, of The Lion Sleeps Tonight fame, with the Naples Zoo, which was involved in a lion conservation campaign. Or a festival-inspired partnership between mindfulness expert Angela Tarquini-Sanders and French horn player Glen Estrin, who once performed with Frank Sinatra and who co-founded Musicians with Dystonia, a program within the Dystonia Medical Research Foundation that helps musicians who have this movement-based disorder. Both live in Naples. They are paired up again this year to discuss “Music as Mind Medicine,” a science-based conversation that will include an examination of music and memory.

For Tarquini-Sanders, the festival not only offers that seasonal extension; it also provides an outlet for residents to share expertise and passions. “I tell people it was either meditate or medicate,” says Tarquini-Sanders, who used to juggle parenthood and a job as a pharmaceutical industry corporate strategist before establishing her Mindful Mindz wellness organization. “I know (meditation) has affected my health in positive ways. I’m so grateful to be able to share it with others.”

To that, Judy Copeland might say “ditto.” Copeland, a part-time Naples resident, is a short-film actor and producer. She submits her films to festivals around the country and travels to them to watch for interesting and promising works. She favors smaller or mid-size events where “you find some real gems of films that people otherwise wouldn’t get a chance to see.”

At the organizers’ invitation, Copeland started a short film component to Stay in May a few years ago. Last year, her picks had included Simpler Times starring Jerry Stiller. This year’s highlight certainly might be The Eleven O’Clock, an Australian film that had been nominated for an Academy Award.

“It’s a very intimate, homey kind of festival,” Copeland says. “The audience is wonderful. A few of the filmmakers have told me it’s the best audience they’ve ever had, that they ask the most intelligent questions.”

Ticket prices have come down over the years, a deliberate effort to make events more widely accessible. Festival participants lead numerous educational workshops for kids and adults, and organizers quietly slip tickets to Naples Music Club scholarship recipients so they and their families can participate.

“I’m living proof of their outreach programs for education,” says Joseph Peliska, 23, a senior at Pepperdine University in California, where he is studying the guitar. “They just reach out to young people … to expose them to the arts, or for those who are already in them to cultivate their interest.”

Peliska, who grew up in Ave Maria, began interning with the festival a few years ago, helping to produce video and audio clips for the festival’s website, among other things. He was there for last year’s Sandoval concert—“life-changing,” he calls it—and credited his Stay in May experiences with helping him land an internship at Shangri La Studios in Malibu, where legends such as Bob Dylan and Eric Clapton recorded.

“They were just so encouraging and invested in me so much and allowed me to really get involved,” Peliska says of the Stay in May founders.

Farmer says the festival thus far has touched some 80,000 people, between attendees and participants in educational events. Another 8,000 to 10,000 are expected this year. There’s no way to track who is coming to Naples exclusively for the festival, but Jack Wert, the Collier County Convention and Visitors Bureau executive director, believes the event achieved its goals of extending season, attracting visitors, and highlighting the region’s many arts and cultural venues.

“That festival was an absolute grassroots initiative,” Wert says, “and they’ve turned it into quite the success.”