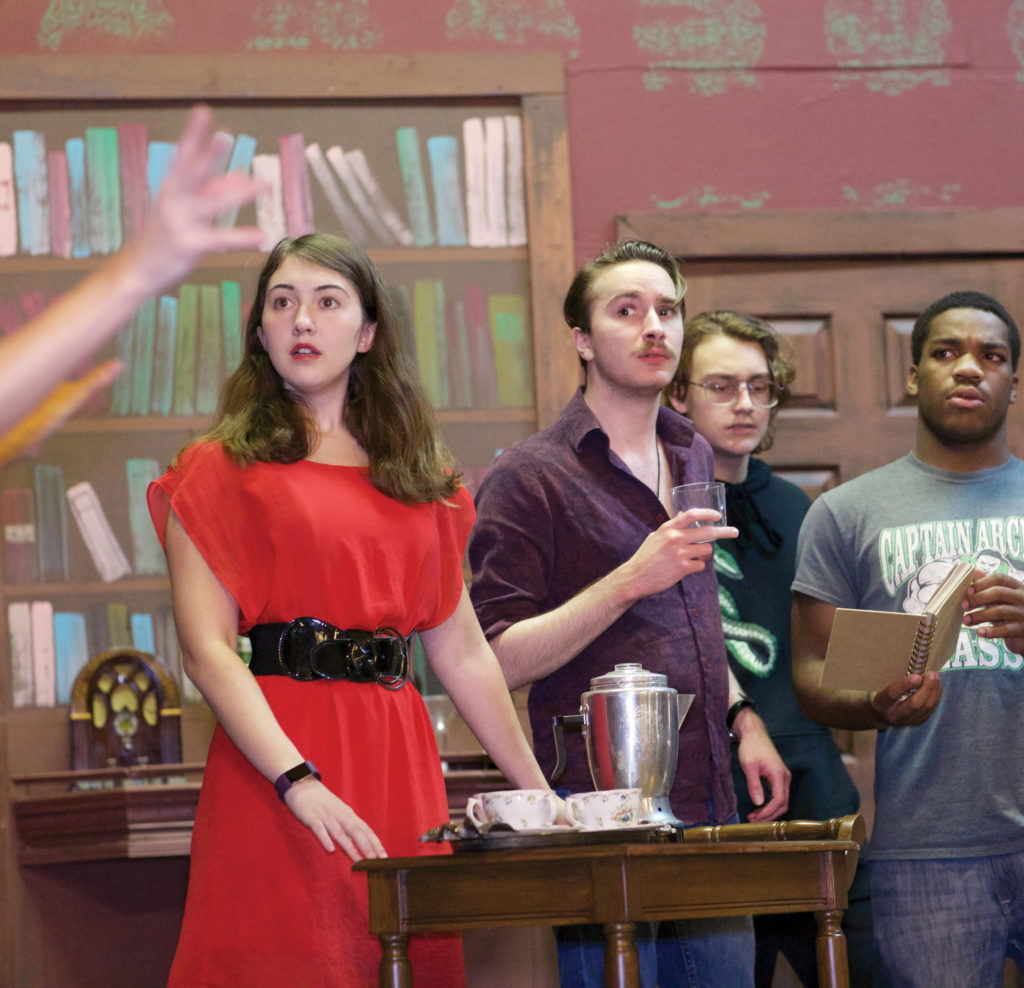 Want to trigger some debate? Stage a play that features Archangel Michael pestering God with the “why, why, WHY” of a renegade Sunday school student poking holes in sacred texts.

Or, suggest that Eve was once Steve and same-sex coupling was God’s initial design until events involving a certain snake prompted a change of mind. Or let your God character reflect on his floods, famines and other such disasters and conclude, “You’re better off without me!”

Such is a snippet from An Act of God, among the shows staged this season by The Laboratory Theater of Florida, the Fort Myers troupe that loves to provoke. Not for the sake of getting a rise out of people (though it does), but rather for the sake of getting people to think. In this case, think about the Ten Commandments, how they apply to today’s world and whether they’re due for a revision. Or think about religion in politics, or mankind’s manipulation of religion, or the murky gray between Biblical allegory and historical actuality.

If the organization (whose motto is “Thinking Theater”) has its way, Southwest Floridians will soon be invited to think more often, more deeply and about more kinds of topics.

Just as “God” and his angelic companions, Michael and Gabriel, departed for Universe 2.0, so too is Lab Theater readying its Act 2. A year ago, the troupe bought the historic hall it’s been renting just east of downtown, making it a permanent fixture in the up-and-coming Gardner’s Park district. The purchase yielded two auxiliary buildings, one of which will be transformed into an education center, and an acre’s worth of property that’s prime for outdoor performances, farmers markets and community events.

“The whole prospect of owning a 1.3-acre property and the potential therein is extremely humbling,” says Annette Trossbach, Lab Theater’s founding artistic director. To close on the $550,000 purchase, Trossbach had to amass the support of donors, patrons and board members who understood what she’s been trying to accomplish since she staged her first show nine seasons ago.

“We know there’s a niche here for people who want to come to a theater that makes you think,” says board member Geri McArdle.

After a performance of An Act of God, Trossbach invited audience members to stay to talk about the show’s themes, their reactions to the script and the questions they pondered. Religious leaders, representing Christianity, Judaism, Islam and Buddhism, joined the cast onstage. The conversation was deep and candid:

“Can we see the Ten Commandments as a living document? They are alive—just as our religion is alive. … They grow and we grow. It shouldn’t be static.”

“I’ll be honest. Most of the show I was not comfortable.”

“We need to stop using God as a scapegoat. It’s man who does things to man. It’s us who has to take things into our own hands.”

“I didn’t see it as mocking God. What’s wrong with questioning?”

“If you do question, you are denounced as apostate. Where do you draw the line?”

The conversation could have stretched on all night. Notably, no one shouted or condemned or damned anyone to any fiery place.

“Some people say theater people are the great instigators,” Trossbach says. “Artists are the ones who ask those uncomfortable questions. I think it’s our job to hold a mirror up to ourselves and look at some of the ugly and uncomfortable truths about where we’ve come from—and then talk about where we could potentially go and how to reach those places. I like not only to ask those questions in the performance but also to keep the audience there afterward and continue the discussion.”

She picks a few shows each season that lend themselves to post-performance conversation. Prior to God, she’d hosted one about homosexuality and conversion therapy, drawn from the plot of Sordid Lives, and later in the season she staged the Florida premiere of Every Brilliant Thing, which conveyed themes of depression and suicide. SalusCare, Lee County’s leading nonprofit mental health and substance abuse provider, partnered with the theater for that one; “talk-backs” were held after each performance. On the heels of the Parkland school shooting, audiences were eager to know more about mental health, Trossbach says. “It’s hard to start that conversation. This play was gentle in its approach. I’m proud that we were able to start that discussion.”

Special projects often revolve around social justice themes, such as the grant-funded 2016 Rauschenberg Play Project that chronicled the experiences of LGBTQ youth (Trossbach continues ongoing work with LGBTQ teens), or last summer’s collaboration with Human Trafficking Awareness Partnerships to stage a performance about sex trafficking that was targeted to young audiences.

“It’s important work, and if we have a great performance and it’s followed up by a thoughtful, mature discussion with a panel of people with disparate world views and the audience is engaged, and people leave here thinking about the topic and maybe seeing a different perspective … then I’m proud we did that,” Trossbach says.

Scripts challenge actors as much as they do audience members. Her casts are open to community performers, offering stage time to those who harbor a love of theater—and a desire to participate in the kinds of works she selects. (Of note, she says she is deliberate in ensuring the body of work presented each season offers opportunities for actors of both genders, as well as a multitude of races, ethnicities, ages, etc.)

“(Performing) opens up avenues within the self to access emotions and deal with things we haven’t dealt with,” says Rob Green, who played Michael in An Act of God and starred in Every Brilliant Thing. He auditioned for Lab Theater after moving to Lee County, newly single and in need of an outlet and a connection to his new community. Rehearsal, says Green, who works in the hospitality industry, is his “happy hour.”

The company is busy amassing funds and chasing grants for renovation work. Trossbach is hoping to make the place as environmentally friendly as possible, another way she can use her theater to deliver a social message.

Meanwhile, board member Ella Nayor is focusing on expanding educational offerings. She envisions a slate of programming that expands intellectual, cultural, spiritual and physical growth—with a special focus on building tolerance. The education center’s guiding principle, she says, will be “tikkun olam,” Hebrew for “repair the world.” To that end, the theater hosted Holocaust survivor Steen Metz last month for a special lecture.

Other educational plans include a program on art and activism featuring Sanibel artist Myra Roberts, a mindful meditation course with clinical psychologist Dr. Rose Thorn, and classes on playwriting and yoga. More offerings will be posted at laboratorytheaterflorida.com as they are solidified.

“The whole point of it is to build a mind, body and soul program to enlighten our community and to bring us together,” Nayor says. “It’s OK if you’re conservative; it’s OK if you’re liberal. We can all learn from each other.”

Hush Up, Sweet Charlotte, June 2018
Evil Dead, the Musical (high school version), July 2018
It’s Only a Play, August 2018
Anna in the Tropics, September 2018
Hand to God, October-November 2018
Every Christmas Story Ever Told, December 2018
A Guy, A Girl, A Piano (cabaret act), January 2019
Hedwig and the Angry Inch, January-February 2019
And the Winner Is…, February-March 2019
Andorra, March-April 2019
The Immigration Project Play (an original play by The Laboratory Theater of Florida based on the real-life stories of Southwest Florida immigrants), April-May 2019