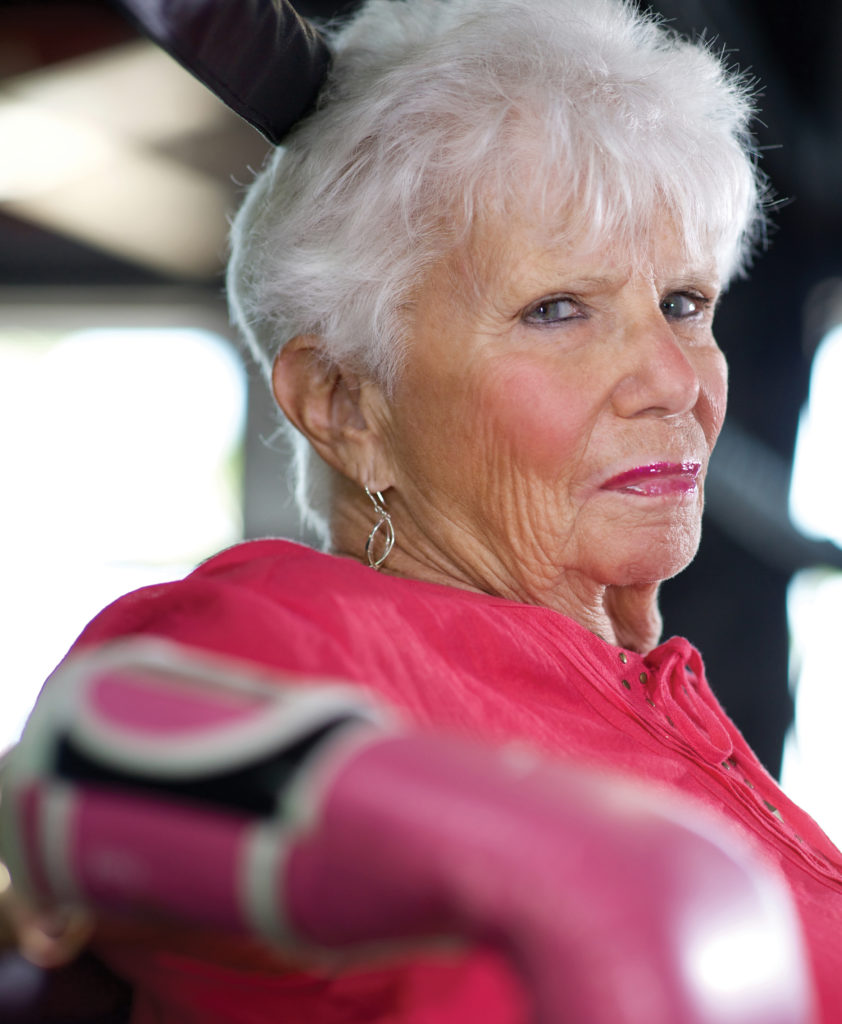 The first time Carol Polis comes into view, she is standing outside her Cape Coral condo, welcoming me and waving me into a parking space. At just 5 feet tall, with white hair and flowered shorts, she might be mistaken for someone’s snowbird grandmother. Not for a no-nonsense, ringside boxing judge. But that’s exactly what she is.

She invites me in and shows me around. “The kitchen’s closed. Permanently,” she says with a laugh, gesturing toward it. “When I was first appointed, the guys joked, ‘She should be home baking.’ I answered, ‘I use the kitchen as a breezeway to get out of the house.’”

She had little time for baking as the first professional female boxing judge in the world. She was not the referee inside the ring, separating the fighters, but the person sitting on a stool beside the ring, scoring punches and determining the winner.

In the early 1970s, Carol was the mother of four young children, living in the suburbs of Philadelphia. Her husband, Bob Polis, was a boxing referee.

“He used to drag me to the fights,” she says. “I hated them. I thought the sport was cruel.”

One night, Bob was refereeing a fight at the Philadelphia Spectrum, and Carol was in the audience. “On the back of the program, he teaches me how to keep score. It was a 10-second lesson,” she says. “That’s how it all began. I sat there and kept score.”

At the end of that match, Bob turned her score in to the boxing commissioner, Zack Clayton. (“Fabulous guy,” she says. “He was a referee for the Rumble in the Jungle. He moved like a cat; a panther in the ring.”) Clayton, who never called her by name, just “Lady,” said, “I like these scores better than the men’s. Keep doing it.” He mailed her a thick book outlining all the rules of boxing. It took her a year and a half to get through it, but she learned every rule.

“I kept going to the fights, and Mr. Clayton would come over and ask me on-the-spot questions. I call that the oral part of the exam. The written part was when I turned in sporadic scores, so he could compare them to those of the men judging.” The more she learned about the sport, the more she grew to appreciate the training and athleticism that went into it. That affection only grew as the years went on.

One night at intermission, Clayton came over to Carol and told her that she and Bob had to go to Harrisburg that Thursday. It was early 1973. “‘You’re going to be appointed by Pennsylvania Gov. Shapp as the first woman professional boxing judge in the U.S.,’ he told me. ‘Right on!’ I said. I thought he was kidding. He wasn’t. Later we found out I was the first professional woman judge in the world.”

The judge of a fight is perched on a stool beside the ring, leaning on the apron of the canvas, at about eye level with the fighter’s ankles. Rounds are 3 minutes long, with 1 minute in between, and a fight can be up to 12 rounds. (Title fights used to be 15 until studies determined that most injuries happened between rounds 12 and 15, and the fights were cut short.) Judges use the minute-long interval to fill out their scorecards, which they then hand to the referee. These days there are three judges working each fight.

And what are Carol and her colleagues looking for? “Effectiveness of blows,” she says. “I’m looking for clean hitting. No low blows. No kidney punches. No hitting on the back of the neck. There are a lot of dirty punches you can throw.”

Learning how to score those punches is all part of how she got used to the sport she once thought of as barbaric.

“I try to wear dark colors when I’m judging, because the fighter can bleed on you,” she says. “They’re that close. Blood also gets on the scorecard. Eventually I learned that a fight will not be stopped unless the blood is interfering with the fighter’s vision.”

She pays very close attention to the guy who comes out before the fight to tighten up the ropes around the ring. If they are left too loose, the fighter could become a projectile of solid muscle flying toward her head.

“I always say to the men sitting around me, ‘If you see the fighter coming through the ropes, I am going under the ring. I’m not strong enough to push him back. And if he fell on me, he’d break my back. So I’d appreciate if you would push him back into the ring.’”

And those fans sitting nearby are not always so friendly to a woman judge. Carol has to deal with heckling from the crowd, who may yell things like, “Carol, did you know that was a body blow?” “Carol, what fight are you watching?”

“They get to know you, and the regular fans can get to know your name,” she says. “The announcer will say ‘Polis’ and then I will either get cheered or booed. I have to have a thick skin, which I never really did,” she says, laughing.

Now in her early 80s, Carol has had a long boxing career. She’s judged 27 title fights, appeared in Rocky 5, written a book (The Lady Is a Champ, available on Amazon), appeared on the TV shows What’s My Line? and To Tell the Truth. She is still judging the occasional fight today, but most of her energy goes to the inspirational talks she gives to groups and clubs. Her theme: “With courage, anything is possible.”

The job is a good fit for her straightforward nature. She sums it up succinctly: “My job is to judge fairly,” she says. “I call it like I see it. I don’t owe anybody anything.”

Long before the #MeToo era, how did she negotiate being the only woman in many rooms full of aggressive men? “I went to parties and had a good time,” she says. “But any leading questions or any ‘Here’s my room key,’ I would just put my arm out and say, ‘Thank you, you’re a great guy,’ and walk away. Don King [the storied boxing promoter] once said to me, ‘You’re like a butterfly. No matter where you go, you can disappear.’”

Only one person thought she was too visible, and that was her husband, Bob. Despite her valiant effort to let boxing be “his thing” and keep herself out of the limelight, he became unhappy with her success and, Carol says, couldn’t handle it. They divorced in 1977.

But Carol had grown to love the sport and her work in it. It was a golden age of boxing, and she had the opportunity to judge such world-class fighters as Mike Tyson and Larry Holmes. She respected the boxers she worked with, as athletes and as people. “I think they’re more well-trained than any other athletes,” she says. “They would lie on a wooden bench and have a 25-pound medicine ball dropped on their stomachs. They have to be disciplined to get off the street, where there’s only heartache and temptation around them. And they go to the gym.”

As for her favorite fighter, that’s easy. Panama’s Roberto Durán, who held titles at lightweight, welterweight, light middleweight and middleweight. “He’s a strong, good fighter,” Carol says. “He’s tough and very serious. He means business in the ring. I like his whole style.”

And most memorable moment from a fight? “I was judging a fight in Italy, which I love. Rimini, where if you stand on the shore you can look across and see Yugoslavia. An Italian guy named Stecca was fighting a guy from Puerto Rico. In the sixth or seventh round, the Puerto Rican guy throws a punch so hard, he breaks the jaw of Stecca. Next thing you know, Stecca’s mother comes running into the ring, takes off her scarpa, her shoe, and goes after the Puerto Rican fighter with it!” Carol throws her head back and laughs. “Now that was a memorable fight.”