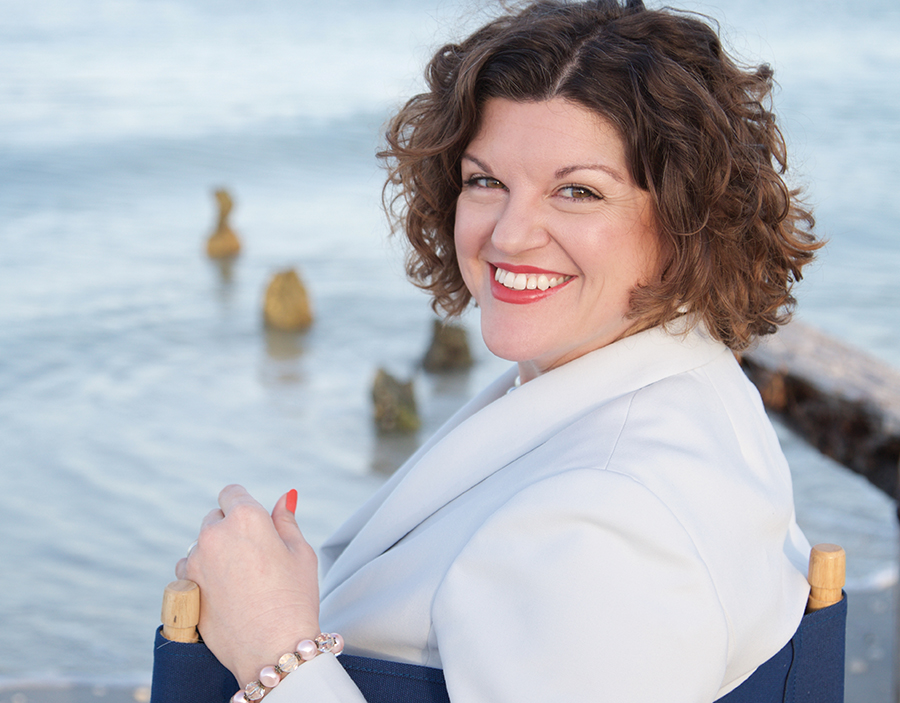 Meet Rebeca Seitz in her workday best and you might notice: Peeking from beneath the cuff of her left sleeve is a tattoo. It doesn’t shout; it doesn’t hide. Its presence is as matter-of-fact as its purpose. This needle-phobe one day simply felt compelled to ink herself with a physical reminder—choosing a charcoal-colored wing alongside her “birth verse,” Hebrews 12:1—to carry on when the going gets tough.

And when you’re the president and CEO of SON Studios, a nonprofit dedicated to producing high-quality “media for good,” producing it locally and building a nearly 200,000-square-foot facility to do so, the going can get tough.

Take SON’s filming of the pilot for The Neapolitan, a TV dramedy about a 29-year-old woman discovering herself anew in Naples after years in Miami. SON shot every minute in Naples and employed a majority Floridian cast and crew—just weeks after Hurricane Irma. Think filming around stripped vegetation, towering debris piles and damaged buildings; finding available trucks and lodging; losing a major investor to hurricane relief; and making sure viewers were none the wiser.

Good thing Seitz is the definition of a go-getter. She’s also a born storyteller. And she’s combining her talents here to do something no one else is doing.

‘Don’t bring the novel to the table’

It’s never been unusual to find Seitz absorbed by a story. At age 4, she memorized her first book, Benji Goes to School. At age 8, she wrote her first work. The subject? A magic corn stalk.

A charming twang likewise reveals Seitz is “about as Tennessee as it gets,” having grown up there on a farm belonging to her family since the late 1600s. She shares memories like that of her first and last smoke: Her mother led her and her sister to the back pasture, broke off some dead grapevine, lit it. Cue that distinct burning of the throat. “Don’t ever smoke,” her mother said. “That’s what it’s like.”

“I was the kid that was told, ‘Don’t bring the novel to the table. It’s time to talk to everybody and eat dinner now,’” Seitz, now 40, says of her childhood. Her great aunt Retta was the relative who really encouraged her creativity, feeding her Reader’s Digest books and setting her up at the sink with a handheld beater to build bubble towers and tales to accompany them.

“I’m trying to raise these kids in this culture that is so coarse. And rude. And mean-
spirited. And ugly. And we’re all in our little silos fighting each other all the time,” Seitz says. She and her husband, Charlie, have 13-year-old son Anderson and 9-year-old daughter Ella. “I just look at it and go, ‘Gosh, I don’t want my kids to have that kind of a society.’”

Enter SON Studios. The future of her “kiddos” may be Seitz’s paramount motivation, but she says everybody who works for SON believes their efforts can shape a different culture.

If you see the SON logo, know this: The media it brands was designed to make you contemplate; question; consider a healthier way of doing or being.  That mission doesn’t always fit SON neatly within the standard boxes: “Christian,” “family-friendly” and the like.

“I mean, movies like Braveheart are not family-friendly. That’s a violent movie,” Seitz says. “But Braveheart leaves you wanting to stand up for a value, wanting to fight for what you believe in. That’s a good movie! Versus, Bridges of Madison County has no violence in it, it’s a love story, but you leave the theater wanting somebody to get divorced.” (“Get out of the truck!” Seitz pleaded with Meryl Streep.)

But in Seitz language, “difficult to describe” doesn’t come close to meaning “impossible to accomplish.”

Seitz founded SON in 2012, joined by her mother-in-law, Grace Shelton, Emmy-winning TV director Steve Feldman and local pastor The Rev. Dr. Robert Scudieri. Seitz was living in Nashville, a hotbed for entertainment. But Scudieri—and a successful test event here—convinced her that Naples would provide the likeminded backing SON needed. (SON, by the way, means “Spirit of Naples.”) The nonprofit lived through a few incarnations, but in 2016 came its current “laser focus” of producing only TV, movies and books, and only those SON-managed and SON-owned.

Here’s how it works: SON is there for development. Then, once a project has a few concrete elements (script, investor, director, star), it becomes a separate, for-profit LLC. SON no longer owns it—the investors do—and instead becomes a managing member.

Seitz’s own winding path included a fellowship in D.C. (the Lewinsky-Clinton scandal made her realize she did not, in fact, want to be a senator); a stint in law school (the shades of gray did not jive with her philosophy); a period launching the fiction line of Christian publisher Thomas Nelson; and nine years running her own literary PR firm, Glass Road.

A special few nudged her toward recognizing her fate in stories: her great aunt early on, a teacher in high school, a best-selling author friend after college. Then, the magic words, from her publisher at Thomas Nelson. “Wow,” he said to her. “You are really a story person.” His statement acted as a permission.

“That was the moment,” she says, “when I recognized: I am thoroughly driven by story.”

The stories Seitz tells today are purposeful, we know, and also numerous. The Neapolitan, at press time being shopped to major networks, is just one of six or eight yarns SON has spinning at any time. Miniseries Mrs. Madison, for one, will re-tell America’s founding through the eyes of the first lady. Reality show True Fashionistas will follow a Naples woman supporting survivors of domestic abuse. Film Harlem Hellfighters will detail  a World War I infantry regiment of African-American soldiers and their experiences on both sides of the racial barrier.

SON leaders plan to construct their own local studio to tell these stories right. At press time they were exploring property in east Collier, and Seitz projected they could open doors in 2020 and employ 800 to 1,200 people year-round.

She’s tapped someone to run the studio; toured other studios around the country; invited big-city creatives to Naples to tell her what it would take for them to come here instead. She’s made plans to expand upon SON’s existing seminars, to train locals so she can hire locals. And, she has a rendering of the 184,000-square-foot dream space in-hand.

Already SON has people of “every stripe” working together. Seitz references The Neapolitan team: The director is the former press secretary for democrat Tim Kaine; the producer last worked on a movie with evangelical Christian actor Kirk Cameron.

The diversity is harder, she says, sure. But better.

IntroNEAPOLITAN from Rebeca Seitz on Vimeo.

Taz in a bunny suit

Amid the artful medley of mementos and set props composing Seitz’s office, one vestige stands out. The gift, sitting atop a bookcase, came from a former PR client. “I have a visual of you,” he told her, “but I don’t want to be offensive.” “You can tell me,” Seitz said. “It’s fine.”

She can be a whirling dervish as she accomplishes things, but she’s nice about it, he meant to say. He sent her the stuffed toy of the bunny-costumed Looney Tunes character, and it stuck. Her husband calls her “Taz.”

But even the swirling Seitz, the bounce of her curls a perfect match to her spirit, has her limits. Surprisingly, she’s an introvert who “just can’t ‘people’ that much.” Sometimes, she says, her mind will just stop.

When she wants to quell her mind more intentionally, she journals, does yoga, heads to the beach. She spends two weeks each summer writing, like the novella behind The Neapolitan. She bakes. She quilts, learning the craft from her mother and loving its permanency. She’s also taken up an unusual form of gardening.

After Irma, Seitz struggled for days to find words among the destruction. As she watched her neighbors cut down even living trees, she zeroed in on a big palm in her own backyard. It was down, knocked to only 18 inches from the ground, but not out. She and her family decided to lift the tree a few inches each day.

They named the tree Rocky, “because he was a fighter,” and he stands upright today.

‘This is the race’

“I really felt like I was being told, ‘You’re going to need a permanent, visual reminder,’” Seitz says about her tattoo. “‘Because you’re going to want to quit.’ Which is odd, because I’ve never quit anything in my life. I mean, my first husband left on my birthday with his third mistress. I do not quit!”

She recites the markings on her wrist: “So now, since we are surrounded by such a great cloud of witnesses, let us lay aside the sin that so easily ensnares us and run with perseverance the race that is set before us.”

“For me, it’s that when I get tired of running, it’s like, nope—this is the race. This is what’s in front of me, and I will stop when I’m dead.”

She laughs. “No,” she adds. “I’ll probably find a way in the afterlife to keep working on it. Like, ‘Come on, humans!’”