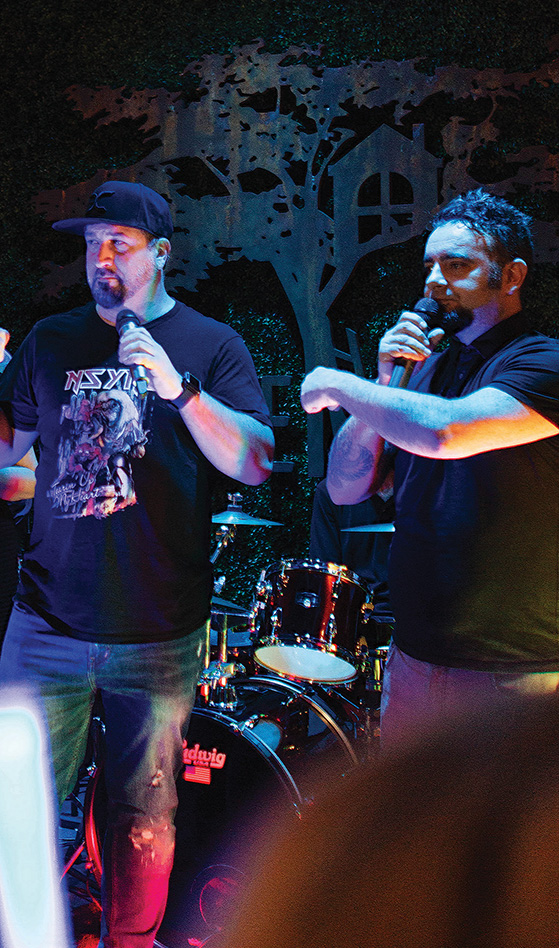 They were shrieking, giggling wildly and swooning—and, no, I don’t mean a bunch of 12-year-old girls at a Justin Bieber concert. This was more than a thousand women in their 40s at Society on April 6 to see two members of the uber popular ’90s boy band, NSYNC. The hip, new restaurant in the Bell Tower Shops launched its first ladies’ night Fireworks and other Fourth festivities along the Gulfshore, “She Loves Fridays,” and lucked out with a bonus guest. “Turns out one of our partners at Society is actually buddies with Joey Fatone,” says Brad Cozza (also a partner with Society), “and he said he’d be happy to show up.” But, one bonus led to another bonus as Fatone brought yet another NSYNC member with him, Chris Kirkpatrick. Not only that, the two musicians performed the hit Bye, Bye, Bye together, much to the giddy delight of the crowd. “So, it was a partial NSYNC reunion in Fort Myers,” Cozza said. Fatone and Kirkpatrick later joined Justin Timberlake and the rest of the band on April 30 to celebrate their star on the Hollywood Walk of Fame. Cozza said the heartthrobs couldn’t have been more gracious to their adoring Southwest Florida fans, signing autographs and posing for selfies. “One of our waiters, though, wasn’t all that into NSYNC,” said Cozza, “so he complimented Joey Fatone for his performance in the movie My Big Fat Greek Wedding. Joey laughed because there aren’t many fans who remember him from his acting career. It was a great night.”

And there are lots of great things happening at the Bell Tower Shops, as it was finally revealed that the entertainment center/restaurant Dave & Buster’s is taking over the old Saks Fifth Avenue space and will open in early 2019.

Change though, is inevitable. When popular Florida Repertory Theatre Artistic Director and Founder Robert Cacioppo was let go in April amid a storm of controversy centered around accusations of bullying, the 20-year-old theater’s annual gala was just 36 hours away. Many wondered if the show would still go on, but theater folk are a tough breed, and, indeed, the fundraising soiree sparkled despite the scandal. And according to board members, it raised more money than ever. Regardless of the change in leadership, it’s clear that the community wants to see the Rep and its company of theater artists thrive. Spotted in the crowd were Fran Fenning, Marc Loren, Debra and Larry Hobbs, Don and Betty Abbott, former NBC-2 meteorologist Robert van Winkle, playwright Mark St. Germaine, and actress and co-founder Carrie Lund, who gave a moving speech about theater being like family. The night was filled performances from Florida Rep actors and interns, while board member Sunny Lubner said it was “an evening that showcased extraordinary talent” and gave kudos to the Rep’s staff and performers.

You just never know who can sing and dance. Take Channing Frampton, anchor/reporter for WINK News. I was blown away by his April performance at the Standard in downtown Fort Myers—his version of Lady Gaga’s Bad Romance was off the chain. Saturday brunch at the Standard is always a blast; you can’t go wrong with bottomless mimosas and karaoke. I hear Channing has delivered great performances locally singing the national anthem for the FGCU baseball team and the Minnesota Twins, too.

How do you convince big-name tennis players to commit to your charity event? Schedule it the week before the Miami Open. Having a worthy cause like furthering cancer treatment programs certainly helps, as well. That strategy proved successful in March for Madisen’s Match Founder Duane Chaney. He moved the event indoors for the first time at the Suncoast Credit Union Arena at FSW. The tennis charity event Chaney started in Fort Myers 10 years ago raised a record $300,000 this year. Players included former top-ranked American Mardy Fish, Wimbledon 2017 semi-finalist Sam Querrey and U.S. Fed Cup team captain Kathy Rinaldi, among others. The dynamic doubles duo of Mike and Bob Bryan impressed on and off the court, and the Bryan Brothers Band entertained at the Madisen’s Match gala. The lighthearted competition proved to be a smart warm-up. The next week in Miami, Mike and Bob Bryan won their 115th title as a doubles team.

Season in Naples brought out a seemingly constant arrival of celebs from all walks of life. Chef, TV personality and writer Giada De Laurentiis held a book signing at Costco. Actor Jeremy Piven, who won multiple Emmys as Ari Gold in Entourage, was spotted around town in April after performing at Off The Hook Comedy Club. Seasonal resident and two-time PGA Tour major winner Fuzzy Zoeller promoted Fuzzy’s Ultra Premium Vodka at Naples Wine Collection. Look around—our slice of paradise is prime with people and moments ready to be enjoyed.

This year’s Celebrity Martini Glass Auction, held in late March, sure lived up to its name. For starters, rocker Cliff Williams of AC/DC fame sat front and center. A few feet away was newly inducted member of the Rock and Roll Hall of Fame John Lodge, from The Moody Blues. Naples philanthropic rock stars Patty and Jay Baker quickly put their paddles in the air and inspired others in what added up to a CMGA record amount of $1.1 million for PAWS Assistance dogs and charities that support the arts. And, entertainment legend Tony Orlando kicked it all off. Music group Tony Orlando and Dawn rose to fame in the ’70s with hit songs Knock Three Times and Tie a Yellow Ribbon Round the Ole Oak Tree, and everyone in the Daniels Pavilion that Saturday night appropriately received a yellow ribbon in their gift bags. Tony worked the crowd and even posed onstage with one of the PAWS golden retriever puppies, getting laughs when he compared his rounded belly to the pup’s. And chef Florian Bellanger from the Food Network series Cupcake Wars spread out his delectable macarons during the dessert after-party. Bellanger and an impressive lineup of the world’s finest pastry chefs traveled to Naples at the request of longtime CMGA supporter chocolatier Norman Love.

ABC7 news anchor Krista Fogelsong has found a way to travel more often: teach yoga. She and her husband, Lance Fogelsong, love all-inclusive resorts. They’ve been to 20 and most recently, in March, spent time in the Dominican Republic at Secrets Royal Beach Club in Punta Cana. The trips aren’t free, but according to Krista they are “deeply discounted” through the company Fit Bodies Inc. The catch? Krista teaches a 45-minute yoga class every morning while they’re at the resort. She says most of her students have no clue about her real job. “We are so busy exercising; we talk more about the class and where everyone is from.” Occasionally, she says, some go online and discover they’re learning from a TV anchorperson. Krista recently started teaching yoga at their community clubhouse. “I think deep breaths and relaxation techniques are great for anyone, anytime of day,” she told me. Yes, even during a stressful live newscast.