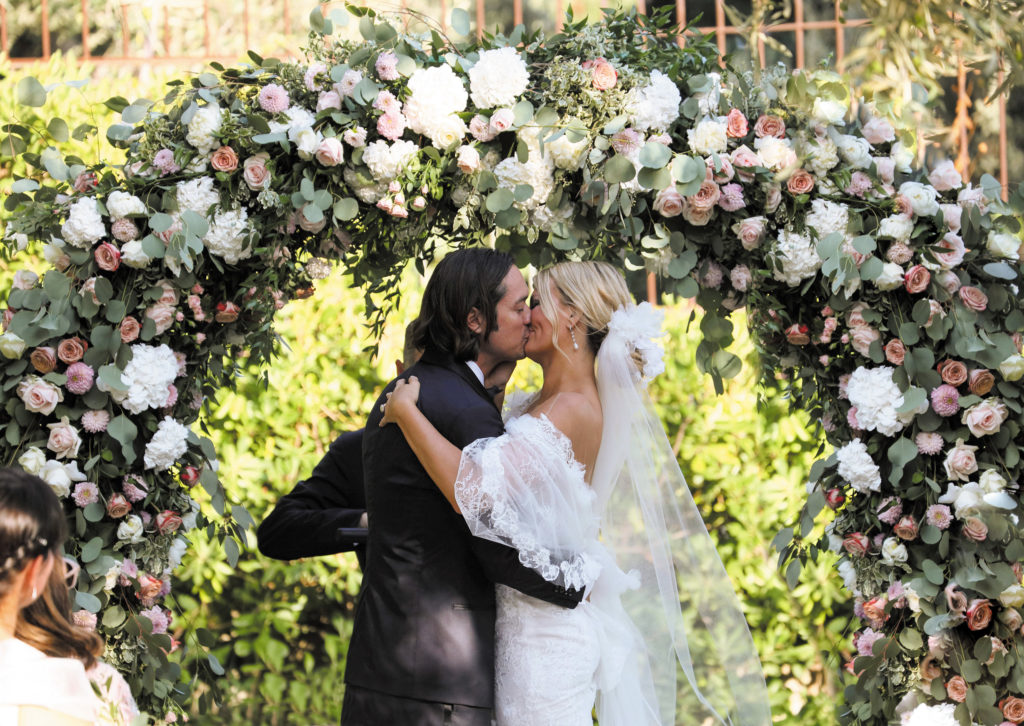 On a cliff dressed with the verdant shades usually reserved for a technicolor movie, and with a towering Mount Etna puffing its nightly smoke rings in the distance, breathtaking beauty—and an abundance of love—was in the air as Courtney Jane Hansen and Jay Serafin Hartington were united on July 20, 2018. The setting was Taormina, Sicily, a polished pearl of a patrician hideout on the Italian island’s east coast.

New York has its Rockefellers. Chicago, the Pritzkers. In the relatively new city that is Naples, Courtney and Jay’s union represented the merging of two budding dynasties. The bride and groom, who have settled in Port Royal together, were both raised in Southwest Florida by their legendary kin: his being the sartorial duo Marissa and Burt Hartington, who as owners of the posh Marissa Collections are as woven into the international fashion elite as an intricate pattern is into a Missoni dress; hers with patriarch Gerald “Jerry” Hansen, a decorated racecar driver with 27 SCCA National Championships, behind the wheel.

But, ironically, their paths didn’t cross until a mutual friend’s wedding just five years ago. Their love-at-first-sight encounter came well after each had achieved success in his and her own right—Jay, now 39, as an entrepreneur with a broad portfolio including watch lines RumbaTime and AVI-8 and the MakeupDrop beauty applicator, in addition to an equal partnership in the family business; and Courtney, 43, as a television personality and author in the automotive world, with her latest show, The Ride That Got Away (of which she is the host and executive producer), debuting this fall on History.

A coterie of 130 friends and loved ones jetted to Sicily from all corners of the globe. Among them was a large swath of Naples power players (the Liegeois, Lutgert, McCurry and Van Arsdale clans, as well as Patty and Jay Baker, Jan Brandt, Joanne Brown, Kathleen and Scott Kapnick, Shelly Stayer, Wanda and Len Zaiser, and more), plus people in the public eye who lent celebrity wattage (Edgerrin James, a former star running back in the NFL; First Lady of Motorsports Linda Vaughn; jewelry designers Irene Neuwirth and Arun Bohra; and comedian Sebastian Maniscalco, at whose nuptials Courtney and Jay first met).

Four days of celebrations played out like a carefully composed symphony that crescendoed with the wedding. A welcome dinner kicked off the festivities at Ristorante Baronessa, a storied rooftop in the center of Taormina that was the site of a 2017 G7 luncheon. Next was the rehearsal dinner at an agritourismo, a vineyard and working farm, on Etna’s slope with a newly constructed table the length of a football field covered in pink blooms. Then we hit a fever pitch with the rose- and peony-strewn garden ceremony and reception at Taormina’s grandest of grande dame’s, the Belmond Grand Hotel Timeo. And, finally, the farewell beach brunch was served with Isola Bella’s postcard-worthy crags in the background.

Catching up with the freshly minted Mrs. Hartington just days after we bid goodbye, she said, “We wanted to give you all tastes of Taormina and Sicily. Hopefully we achieved that. I’m having Taormina withdrawal and heartache that it is over—it was undoubtedly the most special and magical week of our lives.”

But amid the athletes, designers, screenwriters, financiers and hoteliers who were with us, arguably the brightest star was the couple’s 4-year-old daughter, Holland Marysia Walker Hartington. She made her appearances as a Botticelliesque flower girl and a beachy babe splashing in the Mediterranean’s azure—and she was evoked in every one of the more than dozen toasts and blessings throughout the events. That included when officiant Gavin Coleman, the groom’s longtime friend, said, “I speak for all of us in saying, ‘Good job on Holland.’ It’s definitely not every day you meet an adorable racecar-driving princess ninja.”