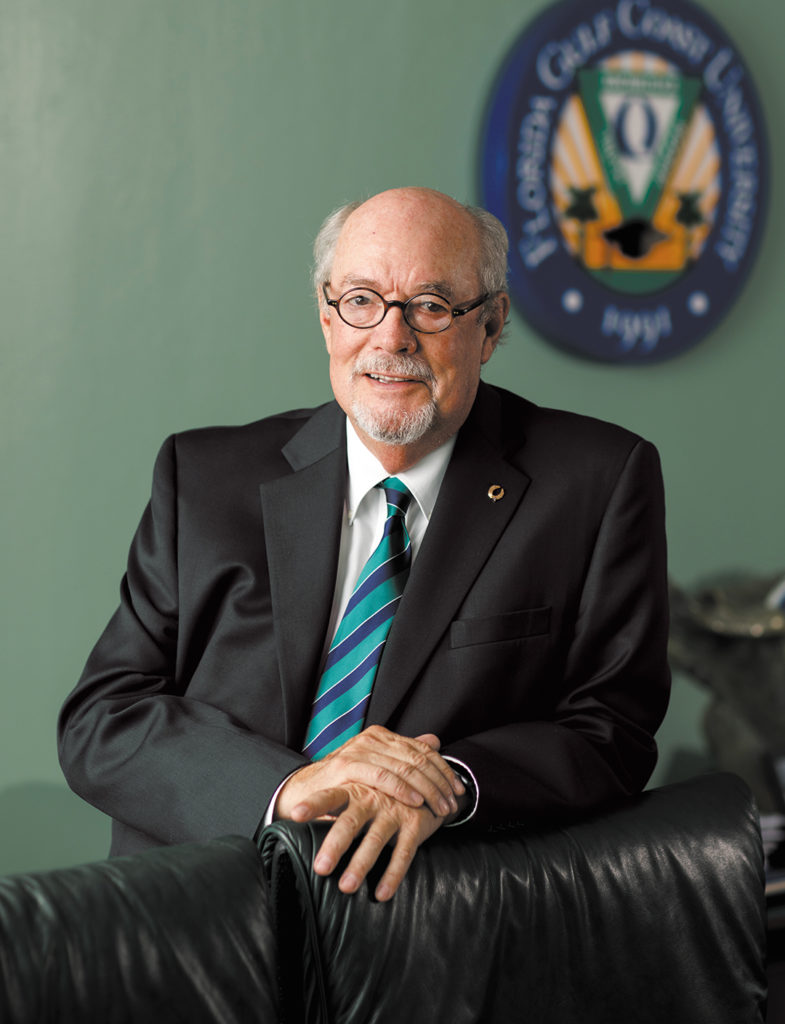 It’s a bit hard to believe that it’s been a year since I assumed the role of FGCU’s president.

It most certainly has been a year of challenge, change and revelation. Two major challenges—an $8 million budget cut and a direct blow from Hurricane Irma—tested the faculty, staff and students. These events, and the continued evolution of FGCU as a major regional university, gave rise to constructive responses and positive change. And all this provided me an opportunity to come to appreciate the Eagle family and the region it serves.

The July 1, 2017, budget cut, due to comparatively low scores on performance metrics, required, of course, some painful decisions. It stimulated a kickoff to reorganization and streamlining. While clearly necessary, disruptions were a consequence. But in remarkable fashion, people stepped up to offer creative solutions. Faculty, staff and student leaders participated in rethinking our approach to ensuring student success. Faculty and staff accepted the reality that compensation adjustments would not be possible. Our union co-presidents, and our Faculty Senate president, carried the message that compensation increases would have to be earned through improved performance. And, indeed, our performance scores have improved significantly. I’ll return to this shortly.

It is well-known that FGCU has long been underfunded, on a per-student basis, relative to other Florida state universities. So as the 2018 legislative session approached, business and community leaders, the incoming Board of Governors Chair Ned Lautenbach, the State University System of Florida Chancellor, every member of the FGCU Board of Trustees, student government leaders and many others rallied to send a message to the region’s legislative delegation. The delegation listened.

As FGCU was addressing its own issue, the local delegation stepped up and delivered $13.7 million in new base funding and
$14 million toward a very much-needed ninth academic building. This reemphasized to me that FGCU is, in every way, the people’s university. And it demonstrated that local legislators get it.

As the state budget was taking shape, Sen. Lizbeth Benacquisto (R-Fort Myers) called me regularly to provide updates from Tallahassee, cautioning to save any celebration until the ink dried on Gov. Rick Scott’s signature. All the others were front-and-center when called upon, and the governor signed.

Shortly after the legislature adjourned, we learned that we appear to have moved up enough to qualify for performance funding, effectively restoring the 2017 cut.

But it was Irma that provided me real insight into the nature of the people who work at FGCU and the maturity of our students. About 2,000 of our neighbors sought shelter at FGCU (most in Alico Arena) through the storm and its aftermath. Nearly 400 students sheltered in place, and a number of faculty, staff and administrators rode out the storm sleeping on floors in several campus buildings. I joined them (incidentally, I would not recommend several nights on any floor to my fellow septuagenarians).

Through it all, FGCU’s people cared for others and rallied to bring the campus back quickly to full function. Never did I hear anyone say “That isn’t my job” or “Do I get paid extra?” They just did what needed to be done. On one of my stops at Alico, I encountered our women’s tennis coach, Courtney Vernon, wearing big blue gloves emptying garbage cans. She simply said, with a smile, “Someone has to.”

The minute the wind quit blowing, folks came out to start the post-storm recovery. One of the first out was our director of physical plant operations, Jim Hehl, who grabbed a chainsaw and began, singlehandedly, clearing the road around the campus. Everywhere I turned, volunteers were taking on every necessary task.

When we made a rather controversial decision to extend fall semester, Student Body President Jalisa White and her team endorsed the decision without hesitation.

Another of the realities about FGCU is revealed in observing the fan base at volleyball and men’s and women’s basketball games. It’s clear, from even casual observation, that most fans have adopted FGCU, because it just doesn’t seem possible that most could be alums. Yet we have a large and growing group of “mature,” rabid Eagles. They are, in a way, ABCs—alumni by choice. Bernie and Elaine Lester are perfect examples. They drive down from Lakeland for virtually every game. Bernie, of course, was president of Alico Corp. where the university started and when the arena was named (and we named the arena expansion after Bernie and Elaine). Win or lose, these fans are loyal. Again, the university is regarded as a community asset.

All this graphically reemphasized that it truly is our Eagle family.

On a personal level, I have benefitted enormously from the insight and advice of my two living predecessors, Wilson “Brad” Bradshaw and Roy McTarnaghan. Both remain very much committed to FGCU. Roy provides a constant reminder that “it’s about the students.” Roy has also proved to be a “senior presence” on the golf course as well. We have urged Roy and Beverly to continue to attend campus events whenever possible. It strikes me that students should meet someone whose name is on a building. Meeting Roy in McTarnaghan Hall seems a bit like meeting Lincoln at the Lincoln Memorial. Brad, while retired to St. Augustine, remains always available for insight, advice and support.

More than at any other university I’ve been associated with, the students at FGCU actually know who the president is. Our students work in many area establishments, and virtually every time my wife, Jan, and I go out for dinner we are warmly greeting by students working their way through college.

I should certainly thank Ken Smith, who brilliantly chaired (in my view) the committee that managed the presidential search process and, of course, Dudley Goodlette, then Board of Trustees chair, who made my transition as comfortable as possible. And I would note FGCU’s Board of Trustees demonstrates how “shared governance” is supposed to work.

As interesting as it has been to come to understand the remarkable progress FGCU has made over two short decades, it’s much more interesting to consider what it can become in the decades ahead. The following seem clear.

First, FGCU will continue to grow in enrollment from the current 15,000 to about 22,000, which, in my view, is our optimal “carrying capacity.”

Second, we will launch or expand academic programs, which will serve to enhance the region’s economy while offering our graduates career opportunities close to home.

Third, we will seek new ways to engage non-student citizens in lifelong learning, career advancement and the exercise of systematic curiosity.

Finally, we will win one or more NCAA championships while I’m still around to wear a championship ring(s).

And, in whatever we, do we’ll start every day trying to do it better.

So we’ll start the 2018-19 academic year with a strong strategic plan, several major initiatives and the resources and commitment to succeed. I’ve promised the campus we won’t have another hurricane but that challenges, both known and unknown, will unquestionably arise. My first-year experience convinces me we’ll respond in fine fashion.