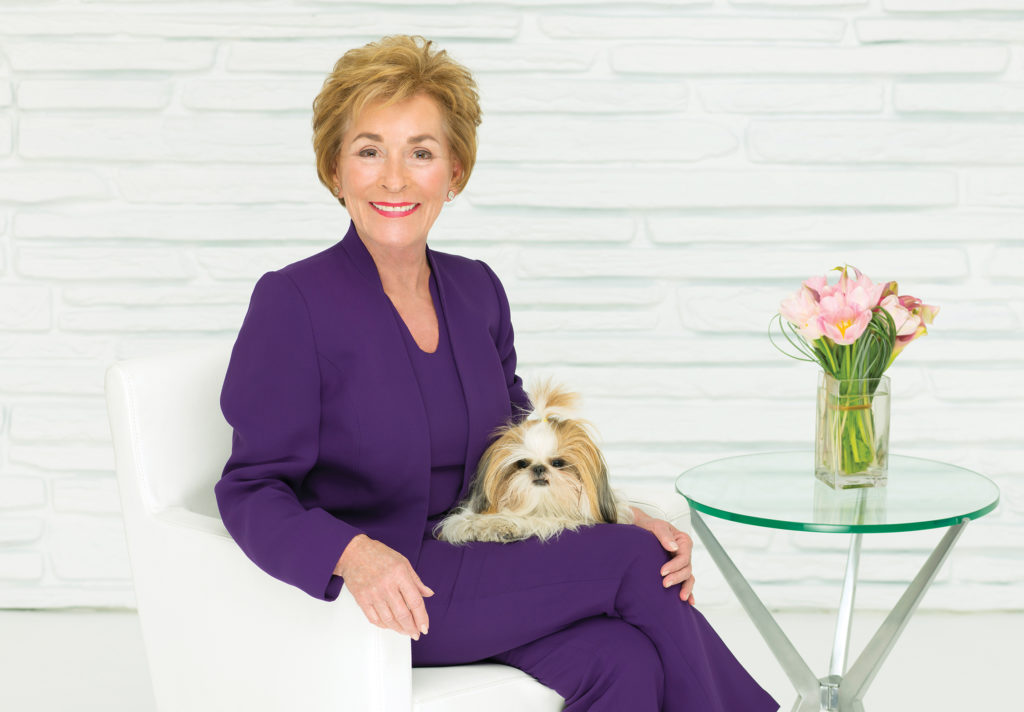 Scout Sheindlin is an excellent judge. She’s curious, even-tempered, sensitive and utterly without guile. And she has been at the feet and on the furniture of America’s favorite judge for three years. Scout is one of three Shih Tzus (pronounced “shee-dzoo”) belonging to Judith Sheindlin, of the Emmy Award-winning Judge Judy show, in its 23rd season.

Sheindlin, who lives in Naples, hears hundreds of cases a year in her small-claims television court. She listens to people who cheat, bully, steal, fight, cry—and lie. As you know if you watch the show, as millions do every day, the judge can’t abide a liar.

“Baloney,” she says with a wave of her hand, dismissing a cockamamie story from a defendant or plaintiff. Incidentally, Scout steers clear of baloney, too. “The doctor said no more beef,” Sheindlin explains.

The judge once said famously, “When you can’t look at me in the eye and tell me the story, that means you’re lying.”

Scout always looks you in the eye. She’s built for it. Her face turns up, revealing large, dark, inquisitive eyes and a square muzzle. White and gold hair fountains from a ponytail atop her head. She is, in a word, adorable.

“I sound like I’m describing a grandchild,” Sheindlin says when talking about Scout.

She named the dog after the main character in Harper Lee’s novel To Kill a Mockingbird, a girl who was straightforward, curious and always into something. That was Scout from the time she arrived at the Sheindlins’ as a chrysanthemum-faced puppy.

Sheindlin’s two other Shih Tzus, Bogey and Diva, are from the same litter, but they’re skittish, frightened by traffic, homebodies. Very different from Scout.

So, Scout goes. When Sheindlin boards the plane for Los Angeles to tape the show, Scout is in her carrier with a view of the judge’s feet. Scout is 5 pounds, 8 ounces and travels light—leash, poop bags and a gerbil water bottle.

Sheindlin and Scout re-create an ancient story from Shih Tzu lore by making these trips. According to legend, the Tibetan Buddhist God of Learning traveled with a little lion dog. The words “shih tzu” are from a Mandarin phrase meaning “lion son dog.” The god’s little dog could transform itself into a full-sized lion. Which, metaphorically, Scout does.

“Scout acts as if she owns Beverly Hills,” Sheindlin says.

Related: Judging Judy: What Judge Judy Sheindlin is like off the bench—and how she gets the most out of her life in Naples

With its long, full mane, the Shih Tzu resembles a lion, but it’s also “several teaspoons of rabbit, a couple of ounces of domestic cat, one part court jester, a dash of ballerina, a pinch of old man, a bit of beggar, a tablespoon of monkey, one part baby seal and a dash of teddy bear.” This recipe is from American composer and teacher James E. Mumford.

While the judge tapes the show, 52 days out of the year, Scout basks in the attention of people coming and going through the greenroom. She is never lonely. “There are millions of people there at all times,” Sheindlin says. There’s another Shih Tzu in the room, belonging to the makeup artist, but Scout prefers attention from people. In fact, she commands it.

“The only time she barks is when you ignore her,” Sheindlin says. “She likes to be adored, as we all do.”

That’s why many people own dogs, Sheindlin says. “It’s a desire to have another living creature adore you and be reliant on you for its sustenance and its walking and its play.”

Sheindlin notices that, especially in Naples, people are very attached to their dogs and take them everywhere. She has had pets all of her life, but for many of the people she meets in Bay Colony, dogs are a recent addition.

“People are so thrilled for the most part when their children have left home,” she says. “There’s not a lacrosse game, or a soccer game, or a tutor, or a friend to pick up. Then they get a dog.”

They have left their businesses and other achievements that gave them their footprint, she says. “Maybe they’re looking for something other than golf to give them an emotional boost.”

Dogs are easier to be with than people, Sheindlin says with typical frankness.

“If you live with a mate, there are times when they do something to annoy you. Dogs really don’t do anything that’s annoying. Their entire mission, most of the time, is to please you.”

Scout does that well. Sheindlin says she puts a smile on her face.

As you might expect from the dog of the straight-talking star, Scout has no cutesy nicknames. She’s just “Scout.” That’s all. She is sure of herself and of her likes and dislikes, which are as follows. Likes: coconut oil, Waterside Shops and her miniature plush Gucci purse with a handle. Dislikes: being left at home. The Sheindlins often eat at restaurants with outdoor seating so they can take her along.

“She’s good for us because she gets us downtown a couple of times a week,” Sheindlin says.

It frustrates her that the law treats animals as property. That’s what a man argued in a recent case, after he accidentally dropped a friend’s teacup Yorkie. The dog squirmed when he was holding it. He refused to pay the $10,000 bill for resetting its leg.

“If you picked up someone’s baby, and the baby started to fuss,” Sheindlin said to him, “if you dropped it, it would be your fault.”

But, the man argued, it’s property. If it were a car, he reasoned, you wouldn’t pay more to fix it than what you paid for it.

“There we come into the difference in my view of whether or not a dog is a piece of property,” Sheindlin says. “I finally said to him, ‘Even if I were to accept the law, what if you picked up her antique crystal vase and it was slippery and you dropped it? Could you argue that it was the vase’s fault?’” The episode hadn’t aired at the time of this writing, but you might be able to guess her ruling.

“An animal is more than a pen or pencil or your favorite sweater. It’s something that has built up an emotional attachment to someone.”

Which brings us to the Baby Boy episode on Judge Judy. The case aired in 2012 and went viral on the internet. The dog, Baby Boy, was a mixed-breed poodle, and both parties claimed to own him.

The plaintiff said the dog had been stolen from him. The defendant said she had purchased it from a woman on the street.

“A life-changing day,” boomed a disembodied voice in the episode’s teaser. “Someone will leave happy.” In slow-motion, black and white footage, the woman wiped away a tear. “And someone will leave broken-hearted.” The man covered his face with his hands.

“The question is,” Sheindlin said, “Is this his dog?”

There was only one living being who could decide this case.

“Bring the dog into the courtroom,” Sheindlin instructed an assistant.

At this, the defendant became fidgety. She held up some papers from the vet, containing vitals about the dog but settling nothing. Judge Judy, over her rimless readers, appraised the defendant, seeming to have made a decision already.

In a suspenseful sequence interrupted by a commercial break, the dog was brought into the courtroom. A collective “aww” rose from the audience. The excited plaintiff called out to the dog in an urgent voice, “Hey, boy! Hey, Baby Boy!”

It was a moment of unbounded joy, teetering on heartbreak. You could sense all the car rides the two had taken together, their afternoons at the dog park, bones from the butcher, tennis balls, ice cream.

The assistant placed the dog on the floor and set it free. Baby Boy scrambled as fast as he could to the man, hopping on his trouser leg, pawing frantically to be picked up, and leaving no question as to who owned his heart.

The defendant protested: “Judge, he does that to everybody.”

Sheindlin looked at the woman and mouthed silently, “It’s his dog.”

Millions of internet viewers have marveled at Sheindlin’s ingenuity to let the dog be the judge, but Sheindlin says the case was self-explanatory.

“I felt the dog had the right to choose.”

And who better to decide?