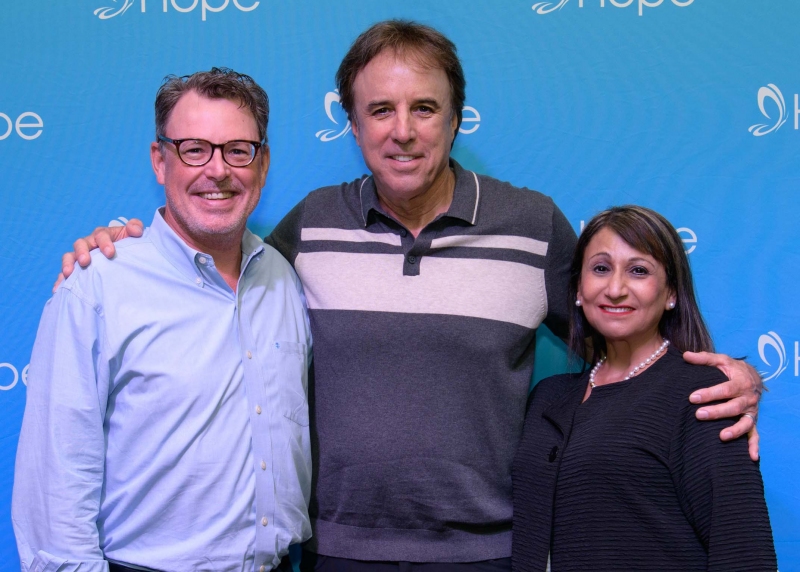 Summer sizzles in Southwest Florida. In fact, it’s so steamy that most people flee north to escape the heat. So, it was a surprise to see that at least a couple of celebrities were undaunted by the humidity and enjoyed Southwest Florida in the off-season. Kevin Nealon made an appearance at Broadway Palm Dinner Theatre in June to raise funds for Hope Hospice and sold out the whole theater. There were more than 500 folks in attendance to see the former SNL cast member’s hilarious stand-up act. Kevin’s no stranger to Southwest Florida, though—his mother, Kathleen, sister Kimberly and brother Chris have lived here for years. Kevin’s dad, Emmitt, recently passed away and Hope Hospice was there for him—and Kevin was generous to give back. There was a reception before the show where Kevin graciously posed with fans. In fact, 93X radio personality Sadie Barbara got a selfie with the star and he complimented her dress (“Can you believe it?” she says. “Kevin Nealon loved my dress!”). During the reception, Kevin doted on his mom, who beamed the whole night. “I’m so proud of Kevin and all our children,” she said. I loved running into so many supporters of Hope Healthcare, including Will Prather of the Broadway Palm holding hands with his girlfriend, Maureen Green; Eric Raddatz of the Fort Myers Film Festival; Realtor Craig Wolf (a close friend of the Nealon family, Craig introduced Kevin before the show); and restaurateur Daniel Kearns and his wife, Nicole. Darlene Grossman, development liaison for Hope Healthcare, tells me that the evening brought in $50,000 for the cause …

A friend to many is Katie Haas, who worked for the Boston Red Sox Florida division for 20 years. As VP of operations, she oversaw the opening of JetBlue Park and made a huge splash in Southwest Florida, lending her time to a variety of nonprofits. Alas, the tennis world took notice, and Katie is now in Cincinnati as the chief operating officer of the Western and Southern Open, a United States Tennis Association tournament that draws about 200 of the world’s best players and almost 200,000 spectators. (I told her she has to send me a selfie of her and Serena Williams.) Katie, her husband, Danny, and their two little ones are missed—but luckily for Katie’s bestie, Lydia Black of Alliance for the Arts, Allegiant Air flies from Southwest Florida to Cincinnati for a song. “I’m so excited for the Haas family,” Lydia says. “New adventures, new places to explore and lots of awesome opportunities—but we’re sure going to miss them all.”

Towering over the turntables, wearing a black tank top and that million-dollar smile, it was him, all right. “DJ Diesel is Shaq!” That’s how Naples photographer Lane Wilkinson described her brush with the sun-drenched star while in the Bahamas. The SLS Baha Mar in Nassau brought in the basketball legend to entertain guests in between sipping rosé and canoodling in cabanas. It’s all about whom you know. Tickets for Shaq’s poolside party cost $200 a person. Lucky for Lane, she made friends with a guy who let her family in for free. Then, next thing she knows, she’s “partying with a super DJ who just happens to be Shaquille O’Neal—wow!” A trip that started as an early birthday present for her daughter ended with a mid-summer surprise.

Now that fall is here, it’s open season again for snook. An award-winning Naples chef apparently couldn’t wait. In July, deputies hauled in Todd Erling, who won the Food Network’s Best in Smoke 2012. An undercover operation by the Florida Fish and Wildlife Commission netted the arrest and hit him with six misdemeanor charges, including buying undersize snook from an unlicensed dealer. At the time, Erling was the head chef of Cafe Luna.

John Travolta turned heads on Fifth Avenue in Naples. No greased-back hair, though. He was spotted on a sweltering Sunday evening in late July. Last year, Scene & Heard told you about Travolta sitting down for a piano session at Barbatella restaurant on Third Street. This time on Fifth, he wore a jean jacket, black trucker hat and scruffy beard—but it wasn’t enough of a disguise to keep people from stopping him and posing for pictures outside Yabba Island Grill. Indeed, a summer night to remember.

Restaurateur and community mover and shaker Sandy Stilwell Youngquist hung out with a celebrity this summer, as Wild Bill (Captain “Wild” Bill Wichrowski), star of the Discovery Channel’s popular fishing show Deadliest Catch, showed up on Captiva and Sandy and her husband, Tim Youngquist, happily played tour guides. Says Sandy, “We had so much fun showing Wild Bill around Captiva Island! We made the rounds from Sunshine Seafood Cafe to RC Otters and had dinner at Keylime Bistro. Then we headed over to Bimini Bait Shack. He’s such a genuinely nice guy, and people recognized him wherever we went.” Sandy and Tim really hit it off with Wild Bill, so a few weeks later, they joined him and some friends at Harbor Island in the Bahamas. Famous friends are fun.