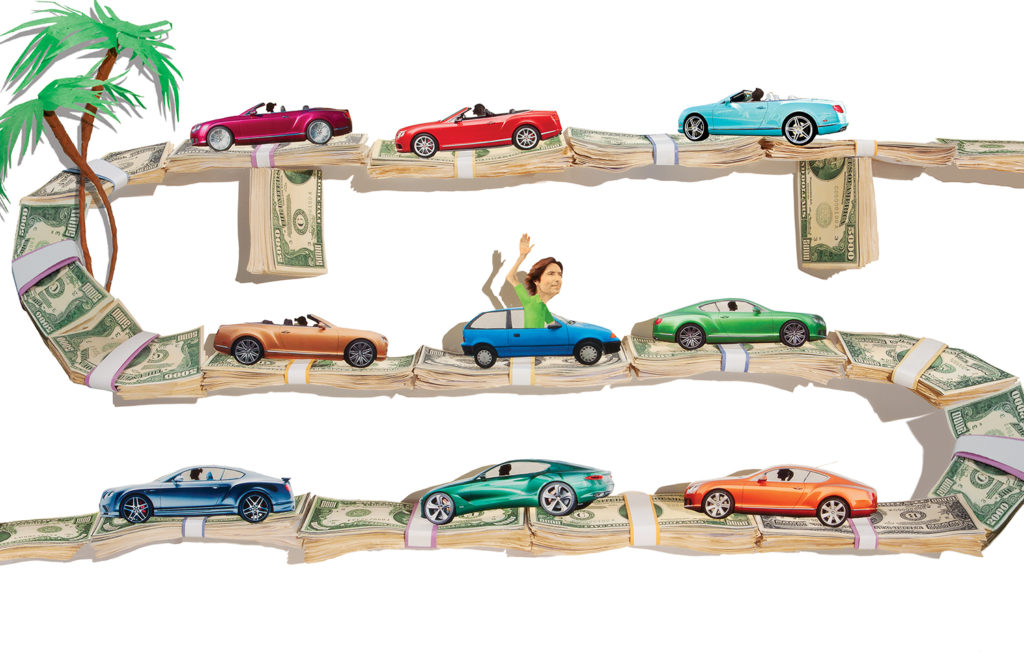 I have a good friend who has labeled Naples as “Fantasy Island” because all things are possible here. Though we tend to be a bit on the conservative side most of the time, the level of wealth congregated along this strip of sand means that the word “conservative” is relative. Spending $50 million on a house isn’t considered extravagant—that’s just the price. If you can afford it, why not? Which brings me to why my inner child responds so positively to this area. Dreams can come true. Don’t believe me? I have a picture on my Instagram (see below) that I took while sitting in my car at a stoplight on 41. Looking through my front windshield you see a beautiful Bentley Continental GTC. In my rearview mirror you see another Bentley Continental GTC. I was headed to a shopping center, where I parked next to, you guessed it, a Bentley Continental GTC—outside of Marshall’s.

But as much as I applaud the owner of the latter vehicle for saving a few bucks on men’s slacks, the truth is they don’t give those cars away. (At press time, the local Bentley dealer, Naples Luxury Imports, had new ones on the lot priced between $241,000 and $377,000.) And yet they’re everywhere. It’s almost as if there’s an unwritten rule that in order to move to Naples you must purchase a Bentley.

Now, you may be leasing a beige Lexus and find it little more than a utilitarian device designed to get you from point A to point B. But speaking as a passionate “car guy,” the abundance of ogle-worthy vehicles here is off-the-charts strange.

Another example: A few days later, while driving to a lunch meeting on Third Street South, I passed not one, not two, not three1 but four Rolls-Royces—two Ghosts, one Dawn and a Wraith—in a span of 4 miles. Growing up in upstate New York (dairy country, no less), I could count the number of times I spotted a new Rolls-Royce on exactly zero fingers. Maybe that’s what made me a car guy—scarcity.

Look, we all have car stories—our first car, the car we had our first accident in, the car we wish we never sold2, the car we almost froze to death in while waiting for three tow trucks3, etc. You know—car stories. My first love affair began when I was too young to drive but old enough to dream about owning what was then the most remarkable car ever to touch pavement: a Lamborghini Countach. The Italian beauty had a wing in the front and a wing in the back (why?), and it was a beast in the streets. It featured scissor doors and a V-12 engine—exotic concepts for someone whose parents sported his and hers Plymouth Volares.

The movie Cannonball Run (written by the late, great Car & Driver editor Brock Yates4 and starring everyone who was famous in the 1970s) had just been released, and while sitting in a darkened theater, I fell in love. Irrational? Yes. Unrequited? To be sure. But isn’t that the type of love that really sticks with you?

The car was featured on the cover of Road & Track magazine that same month, and I had found enough change in my grandmother’s couch to buy the issue. I can’t recall if there was a centerfold of the car, but there certainly should have been. The horsepower was outrageous, the torque obscene. The rear window was the size of a mail slot—but who cared, as the car sported that massive rear wing, which blocked all hopes of seeing behind you.

Also, it was virtually impossible to get into or out of the car because of the wide sill of the doors. I’m told it was like stepping over a sleeping toddler. But I didn’t care. I was in love. I carried that magazine around with me everywhere I went. And one night, while lying on the living room rug in front of the television, I had the magazine open, flipping back and forth between pictures of the leather-clad interior and glamour shots of the car chewing up the twisty scenery of what I assumed to be California.

Just then one of my sisters jumped on top of me, her left foot landing directly on what looked like the Pacific Coast Highway. As she tumbled to the floor, Big Sur was rocked and did exactly what geologists have been predicting since Richter conceived of his scale. It tore off, veering left and taking the front fender and driver’s side door with it. My very first wreck.

Fast-forward to my college years, when my love affair with Naples began. Yes, the beaches were great. The houses were great. The restaurants were great. But at night I’d go from dealership to dealership looking at the spectacular array of luxury and sports cars lined up under the lights along the roadside—as glamorous as Beverly Hills, but more conveniently located.

Every time I visited Naples I made a pilgrimage to Publix to pick up a carrot cake and to the dealerships to see if I might spot a Lamborghini, Lotus or some other exotic. Of course, the beauty of Naples, then and now, is that you could just as easily wander through a parking lot of a shopping center and see all manner of luxury and exotic cars. The valet station at Waterside Shops is still perfect for spying Maserati, Ferrari and the like.

Of course, I never had the patience for that, so I would just cruise over to Naples Luxury Imports and lust after the latest offerings from Rolls-Royce, Aston Martin, Bentley, Jaguar, Maserati, Range Rover. The lighting was fabulous, and more often than not someone with a Ferrari or Porsche would pull into the lot to peruse the selection while I was loitering next to my rental car, giving me the impression I was in an episode of Miami Vice—sans the cocaine, gunfire and a sockless Don Johnson.

And Naples has only gotten better for car lovers. Aside from the massive new car dealerships for grand marques such as the aforementioned Rolls-Royce and Maserati, there are a number of world-class used car dealerships here that either loudly or quietly sell some lust-worthy cars. Naples Motorsports5 on Airport-Pulling Road is probably the best-known dealership for outrageous cars. At the time of my writing this, it had a Bugatti Veyron convertible in stock priced at a mere $2,299,995. They also had a Ferrari LaFerrari for even more money. These are used cars, by the way.

Around the corner from there you can wander into Naples Classic Car, which is home to some terrific vintage automobiles, most notably ’70s-era Ferraris and Porsches. In fact, they had four Ferrari Dino 308GT4s on their sales floor during a recent visit, one of them with only 1,070 kilometers on the odometer. Even more impressive was a ’67 Porsche 911S that had a stunning 618 miles on it. True, it was $269,000. But if you’re into old cars6 that are like new, it seems like an interesting option.

After all, now seems as good of a time as any to start another car story.

3. My BMW750il died on a New York highway one night during a record cold snap—18 degrees below zero. The first tow truck got us exactly a quarter-mile before succumbing to the cold. Tow truck two, whose driver was in the middle of talking smack about company one, died at the off ramp about 1 mile away. Tow truck three arrived only to discover truck two operated with an electric winch that could be operated only if the truck was running. It was not. And so truck three had to hitch up to the front of truck two, which was hooked to the front of my BMW. And $600 worth of diagnostic work later, I discovered I had run out of gas.

4. I was lucky enough to spend some time with Yates during an exotic car video shoot in New York. He gave me some excellent advice when he pulled me aside and said, “As a journalist, you’re too poor to consider racing your Porsche.” Too true.

5. Naples Motorsports hosts a Cars and Coffee event the first Saturday of every month from 9 a.m. to noon where car lovers bring their prized possessions for an exotic car show—with muffins!

6. Old cars are great, but let’s not kid ourselves; at this point they’re really just driveway art. They aren’t comfortable or reliable. As much as I loved my old Jaguar, a new Ford Focus would beat it in every way possible—other than looks. Good thing I’m shallow.