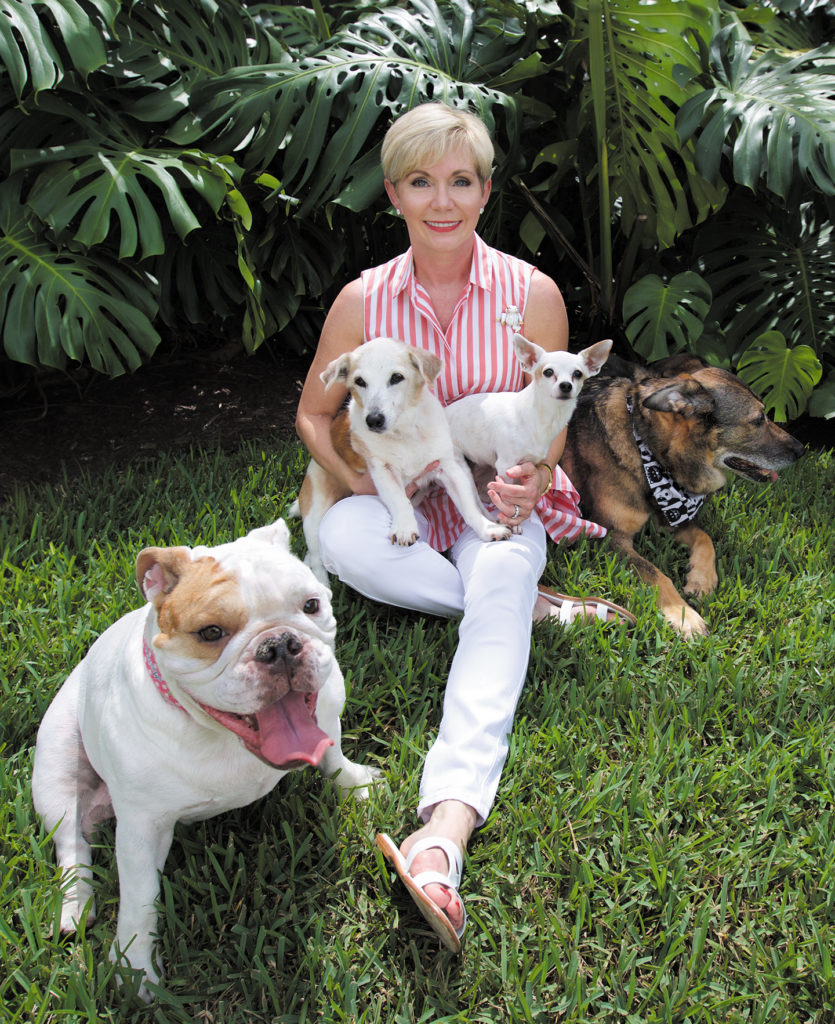 When Sandi Moran steps into a room, all eyes tend to fall on her. Not because she’s flashy (she isn’t; in fact, she’s naturally understated) or because she towers over others (she’s actually quite diminutive in size). Rather, it’s a combination of elements—her posture, her grace, the way she radiates warmth—that makes people gravitate toward her. Moran is best known locally for her involvement with the Naples Children & Education Foundation, which is behind the Naples Winter Wine Festival, but her roles in the foundation and the festival, though substantial, don’t entirely define this powerhouse of the Gulfshore community. She’s also a competitive ballroom dancer and Tony-winning Broadway producer, as well as a mother with three children of her own and an additional three children she calls her “adoptions of the heart.”

A fifth-generation Floridian, Moran was born in Miami and spent her early years in Naples. Though she attended high school near Nashville and college at Vanderbilt and the University of Florida, she found herself back in Naples after graduating. That’s where she met her husband, Tom Moran, a financial adviser and New York transplant who hailed from a northeastern Irish family.

“He was the very first Yankee that ever married into my family,” Moran says. “It was quite the culture shock for him. With Southern families, there’s no such thing as a locked door. You show up at each other’s house any time of day or night.”

Moran’s family, who owned citrus acres and raised cattle and at one time was the largest seed grower in the state, was quick to introduce Tom to Southern living, including foods like mustard greens and cornbread.

“That’s the one he laughs about the most,” Moran says.

After the couple married, they had three children, Kevin, Kylen and Patrick, and Moran dedicated herself to philanthropic causes around Collier County. The pair helped organize an annual wine tasting and auction to benefit a local youth charity, and the event was so successful that, along with the push from some Naples visionaries, the fundraiser was expanded into something grander. Thus the Naples Winter Wine Festival was born in 2001.

The Morans stepped back from the festival—their oldest son has dysgraphia, a learning disability, and they decided that Moran would homeschool all three children until high school—but in 2010 they returned as trustees.

“I was blown away by how much NCEF was doing,” Moran says of coming back after her time away. “I saw how they were not just supporting a large number of charities financially but helping to direct them and the services they could provide in a better way for the children of Collier County. They took initiative to see what the unmet needs were and how they could meet those needs.”

This year, Moran has been appointed the NCEF board’s chairwoman.

Though Moran is modest about her role in the festival’s continued triumphs, it’s clear that she’s a woman who knows how to cultivate success. Her three children have all excelled—her oldest son is earning his Ph.D. in entomology; her daughter was recently named to the top 100 of Forbes’ list of next-generation financial advisers; and her youngest son just graduated from Harvard. She’s also a competitive ballroom dancer, and, though she only started dancing in 2015, she regularly takes home first place medals.

Nazar Norov, the Russian-born dancer and current two-time U.S. and World Professional American Rhythm Champion who co-owns DanceLife in Bonita Springs, trains Moran and dances as her partner in pro-am ballroom competitions. He had this to say about her:

“What I observe is a great work ethic—she’s always on time, always prepared, always does her homework, practices by herself—and a great, great attention to detail. I think that really is important in business, in life, in everything. It’s the details that make it, and she’s definitely not just running through those. She’s trying to understand them, asking questions constantly to get a deep understanding of everything. And she’s very, very positive.”

Recently, Moran has brought this positive attitude and desire for success to a new project: Broadway producing.

“A friend of mine invited a small group of friends to a dinner party, and I sat next to his friend Hunter Arnold, who is a Broadway producer,” Moran says. “He regaled us with stories of Broadway. I was fascinated with the business, and I started investing small.”

Her initial contributions were financial, but over time Moran has given more and more input on the shows she produces. With Anastasia, which is on Broadway now, she gave feedback on some of the scenes and worked with the show’s team on costuming. When it comes to selecting which shows she’ll be involved in, Moran has a particular interest in musicals. This year, a musical she helped produce—Once on This Island—took home the 2018 Tony for Best Revival of a Musical.

“I ran down to the stage as fast as I could in high heels and a long dress,” Moran says of her big Tony moment.

Ken Davenport, president of Davenport Theatrical Enterprises in New York, was the lead producer on Once on This Island and worked with Moran.

“I think the world of her, and she’s a very important part of our business up here,” he says. “Sandi is exactly the type of partner I look for on my shows. She has a tremendous amount of business acumen combined with a fierce passion for the arts. I know my shows have a better shot at success when she’s on my team.”

As part of the perks of being a producer, Moran has attended Broadway’s opening nights and after-parties. She’s even rubbed elbows with theater royalty.

“One of my first experiences was getting to meet Sarah Jessica Parker and Matthew Broderick,” Moran says. “They were so nice. We talked for about 30 minutes, mostly about children. It was really fun.”

Moran’s producing duties match well with her instinctive generosity—she’s someone who has been gifted with what can only be described as a big heart—and when it comes to talking about children, Moran has a lot to say. In addition to her three biological children, she has nurtured three other children. When a young man from China came to live with the family eight years ago as part of an international exchange program, he never left (as Moran jokingly puts it), and he recently earned his master’s at Notre Dame. Moran refers to him as her adopted son.

“We love him dearly,” she says. “My children think of him as a brother.”

When numbering her children, Moran also includes the son and daughter of a good friend who passed away.

“We took her kids under our wing,” she says. “We’ve just been there to support them like a parent. Not replacing their mother, but just making sure that that they had a home.”

Moran is adept at providing a home to those who need it, down to the smallest creatures. Like Buddy, her 17-year-old Jack Russel mix who’s totally deaf; Stella, her German shepherd mix; Tica, the abandoned chihuahua who spent a month running wild in the woods behind a friend’s house before Moran could rescue her; and Hattie, short for “Mad Hatter,” the bulldog who’s undergoing chemo but who still makes Moran laugh every day.

If Moran seems to have something of a charmed life, it’s because she’s worked hard for it. She brings the full force of her efforts to all her endeavors, and in turn she shines the light of her personality on those who surround her. It’s no surprise that she’s been met with success on the dance floor, on Broadway, in her family and in the greater Naples community.