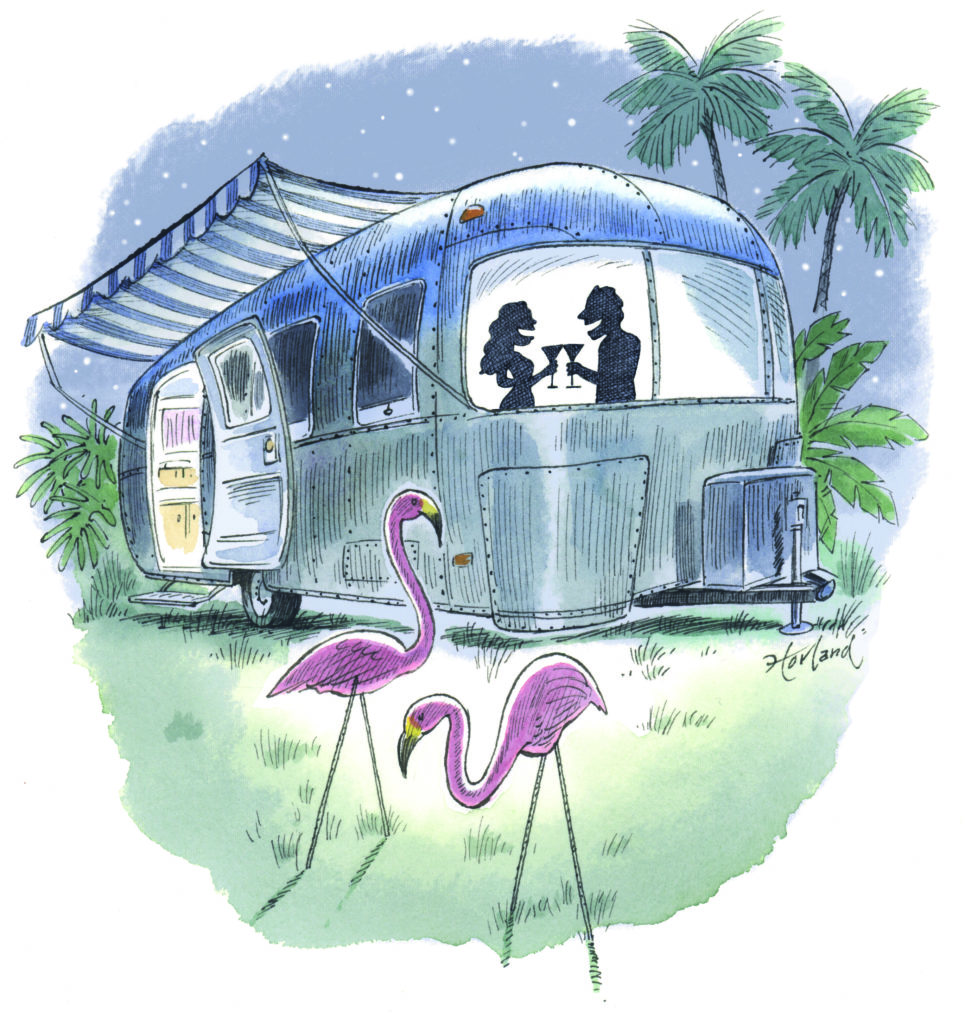 There’s nothing that Ms. Adventure loves more than a well-appointed hotel room. From the second I walk into the room, the freezing cold air-conditioning makes me giddy. After I get a whiff of the freshly laundered linens, I immediately head for the balcony to take in the view. Like a 6-year-old, I then scamper over to the minibar to gaze at the $12 bag of M&M’s and the $16 bottle of sparkling Evian water.

Finally, I hop onto the bed and stretch out in order to fully enjoy the luxurious pillowtop mattress. And while I’m partial to a Ritz-Carlton or a Hyatt resort, I’m thrilled with a boutique hotel—in fact, I’ll happily stay in a La Quinta or a Red Roof Inn as long as it’s clean and the staff is welcoming.

After all, travel can be a struggle. Hotels make it bearable.

At the very least, hotels provide me with a comfy bed, a blow-dryer, a coffee maker and cable TV. In a perfect world, I get a view of the Gulf, fabulous room service and a bellman who always says, “My pleasure, Ms. Davis.”

Alas, there’s not much adventure to checking into a hotel, unless you include getting lost at the resort while trying to find the spa for your $120 pedicure (true story).

But, let’s face it. Adventurers don’t stay in hotels—adventurers stay at campgrounds. Which is exactly what my husband and I did for a weekend this summer: We glamped.

It all happened rather suddenly. One Saturday last spring, my husband, Todd, took me to an RV dealer to look at Airstreams. I went along for the ride, thinking it was just a lark on his part. Besides, I was curious. I had seen the shiny aluminum trailers on the roads for years, and they intrigued me. I wondered what the attraction was. After all, there are so many enormous motorhomes with fireplaces, and wide-screen TVs, and garages, and hidden pop-out rooms—why would anyone go with an Airstream instead?

But, after walking through several of them, I got it. The Airstreams were cool, retro, streamlined and practical—and, yes, glamorous, in an Ikea sort of way. Our favorite was a 22-foot Airstream Sport with a good-size kitchen, a comfy dining room/living area with a flat-screen TV, a roomy bathroom and a hotel-worthy queen-size bed. Afterward, we went to lunch, and I forgot all about it until a couple of days later when Todd called me and said, “Guess what, honey? I bought our Airstream today. No more hotels for us!”

The day we went to pick up our new tiny house on wheels, I looked it over carefully for storage. I suppose for most people there’s plenty, but I was a little daunted. When I pack, I tend to throw all my favorite clothes into a suitcase with the intention of deciding what I’ll wear once I’m there.

But when it comes to camping life, one has to be practical. There’s a place for everything—and ideally, those things are small. There’s no room for clutter.

For our maiden voyage, a weekend at the Periwinkle Park campground on Sanibel Island, I packed one pair of pajamas, two pairs of shorts and two T-shirts, and it wasn’t easy.

On our way to the campground, which borders the Sanibel River, I Googled female names associated with adventure. We settled on the name Dorothy, with the hopes that Glinda the Good Witch would always have our backs.

Apparently, Glinda’s not in control of the weather, though, because when we arrived at our shady, tropical campsite, an afternoon thunderstorm suddenly reared its ugly head directly on top of Dorothy. It was raining sideways, there was lightning all around, and Auntie Em was nowhere to be found.

We sat in our SUV for about 15 minutes and stared at the weather radar on Todd’s iPhone. The storm wasn’t moving. Todd threw caution to the wind and got out to unhitch Dorothy and hook up her electricity, plumbing, etc. Meanwhile, I stayed in the comfort and safety of our vehicle with my fingers in my ears and prayed that Todd wouldn’t get struck by lightning.

As luck would have it, the storm stopped just as my soaking wet husband finished the 30-minute process of securing Dorothy. We turned on her air-
conditioner, made some cocktails and started putting every little thing in its place. It was around 782 degrees outside, so I was amazed to see campers camping in actual tents all around us. But, they appeared to be millennials, and people in their 20s do so much better with the elements than do the rest of us.

We unfurled our awning and, to make our site look homey, put out two decorative plastic pink flamingos. (We randomly named them Sam and Ethel.) It wasn’t The Ritz (no room service or chocolates on our pillows), but we slept great and even figured out how to make hot coffee in the morning with a French press.

I took a walk around the campground and spotted two turtles, a handful of iguanas and a variety of feathered wildlife. I even saw a baby alligator slip from the bank into the river, but as long as he and his parents stayed away from Dorothy, Sam and Ethel, I was fine.

We sat outside at night and marveled at the stars while listening to mosquitos fly into our bug light and zap themselves to eternity. We talked a lot about future trips and even fantasized about road-tripping across the United States in Dorothy, until we realized that we would need money, food and health insurance. Still, during the entire weekend, we didn’t talk about work once.

But, as a former hotel junkie, I can say that I’m going to enjoy Dorothy the Airstream a lot, and I can’t wait to escape for more adventures with her. If nothing else, I’ve learned that I can exist an entire weekend with just enough clothes to fit in a tote bag.