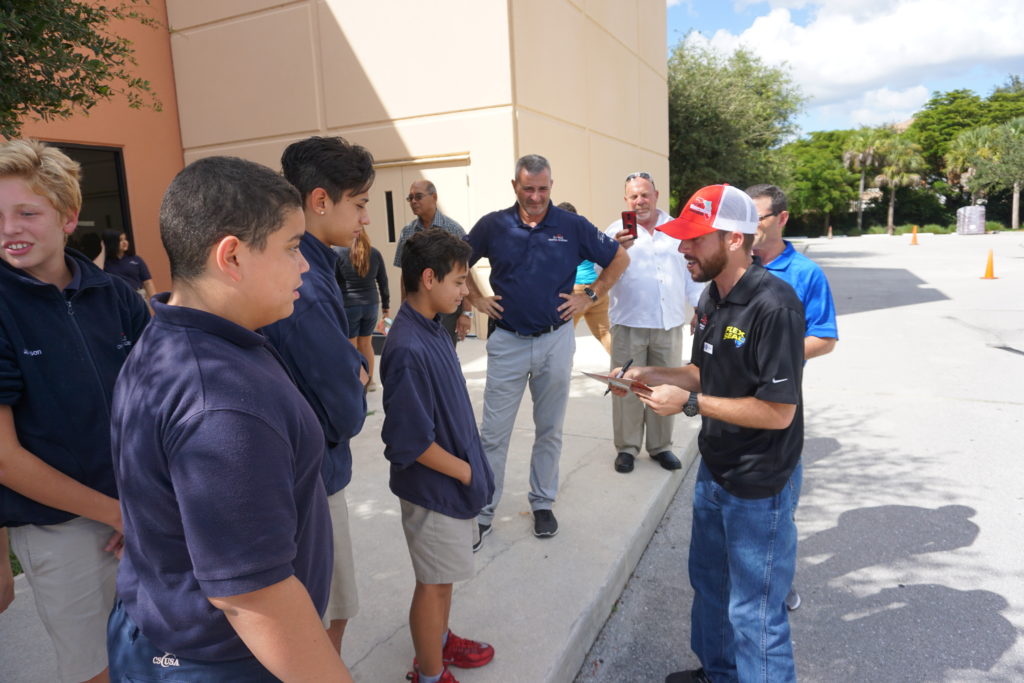 As the NASCAR playoffs are winding down before Ford Championship Weekend at Homestead-Miami Speedway November 16-18, driver Ross Chastain visited Fort Myers on Tuesday, October 16. For Chastain, who was raised just outside of the Fort Myers area in Alva, the trip was a bit of a homecoming.

Chastain started his day at Golisano Children’s Hospital, where he visited with children to help brighten their day. Dressed in his fire suit, Chastain went room-to-room in the hospital, where he handed out signed hero cards, hats and teddy bears to patients.

“It’s the coolest thing, but the hardest thing I get to do all year when it comes to my job as a race car driver,” said Chastain. “If I can put a smile on a few kids’ faces though, it’s pretty cool.”

Following his visit to Golisano Children’s Hospital, Chastain headed to South Fort Myers High School to check out their automotive, welding and electrical programs. Chastain learned about many of the projects the students have been working on, and he spoke with them about how their programs correlate to the NASCAR industry.

“I wanted to see it for myself, and see what they’re doing and what they’re teaching kids,” said Chastain. “The kids at South (Fort Myers High School), if they go down this career path, they’re so far ahead coming out of high school in the three areas they showed me today. They’re lightyears ahead of where I was when I was working on my race cars when I was young.”

The driver of the No. 4 car for JD Motorsports in the NASCAR XFINITY Series and the No. 15 car for Premium Motorsports in the Monster Energy Series also made an appearance at Six Mile Charter Academy, where he engaged a class of eighth grade student in a STEM lesson. Chastain taught the students about NASCAR’s three D’s of Speed – drag, downforce and drafting – helping the kids to understand how everyday science affects him on the racetrack.

Chastain is currently competing in his fourth full-time season in the NASCAR XFINITY Series (NXS). This year, the 25-year-old captured his first career NXS victory, at Las Vegas Motor Speedway. Chastain will return home next month to compete in the Ford EcoBoost 300 and the Ford EcoBoost 400 at Homestead-Miami Speedway November 17-18.