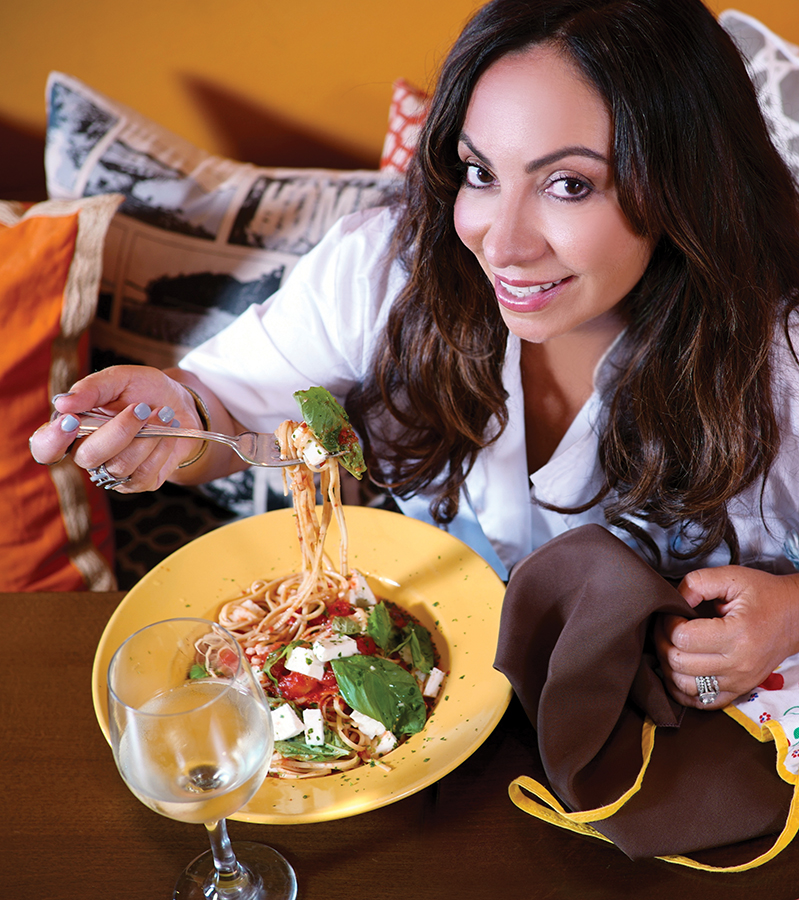 Chef Gloria Jordan de Cabral strides into the kitchen of La Trattoria Cafe Napoli wearing a flounced black skirt stitched with silver thread and gleaming with rhinestones. On her feet are a pair of silver-tipped ankle boots, and on her head sits a glittery bandana that keeps her long hair off her face. Her white chef’s jacket glows against a backdrop of cookware and spices. As she chops cilantro with a heavy chef’s knife, the silver bangles on her wrist clink together and the silver rings on her fingers catch the light. She slips effortlessly between Spanish and English as she talks first to her cook and then to her server. Ingredients are fanned out in front of her—sun-dried tomatoes, garbanzo beans, fresh basil—and her movements are precise, controlled and confident.

“You need your own cooking show,” someone says.

Jordan de Cabral laughs. “Yeah, yeah. Like I have time for that.”

Diane Meyers, a longtime friend of the chef, accurately sums her up this way:

“You have to drink a lot of caffeine to keep up with Gloria. She’s hilariously funny, and she can easily hold three conversations at one time. She is highly intelligent and highly ambitious. She’s a fabulous business woman. She really embodies it all. It’s amazing to watch. In her restaurant, she walks around and sits at tables and talks to people. It’s like everyone wants to be with her; they’re flagging her down, saying, ‘Gloria, come sit with us.’ She’s just so full of life and happiness with her big smile. And she’s a brilliant person. She hides the brilliance under that lightheartedness, but don’t be fooled.”

The Havana-born chef has been cooking since she left Cuba, but working in kitchens was not initially part of her plan. From a family of doctors and architects, Jordan de Cabral was supposed to follow in her family’s legacy, so she studied architectural drafting.

“I did it to please my parents,” she says, “but I didn’t like it. I’m a people person. I need to talk; I need to create. Drawing is very boring to me.”

In 1990, when she was 19, she took a flight from Havana bound for Moscow with her boyfriend at the time. They were supposed to change planes in Stockholm, but when the flight touched down in Sweden, instead of continuing on, the pair went to customs and asked for asylum.

And if she were denied asylum in Sweden?

“I would have been going anywhere,” she says. “Yes, even Russia.”

In Sweden, she was supposed to attend school to continue studying architecture, but she hated the idea.

“I was like, ‘Now what?’” she says. “So I started working in a kitchen just to see if I liked it, and I liked it from the minute I walked in. I felt like I had power, and I was just a dishwasher. The minute they handed me an apron, I was like, ‘Wow. Maybe I should take this serious.’”

That’s when Jordan de Cabral decided to become a chef.

“A cook?” her mother said when she announced the decision to her parents.

“Not a cook. A chef,” Jordan de Cabral replied.

“Are you sure?” her mother asked.

She spent the next four years training at a culinary school in Sweden, and when she graduated she headed to Spain determined to open her own restaurant. But the economy in Spain was bad at the time, and after a brief stay she decided to move to the United States to live with her uncle in Cape Coral. If she wanted to have her own restaurant, he’d advised her, she should consider Southwest Florida. The area was growing fast, he said, and it would be a good place to launch her career.

Still, even after the move, she ran into hurdles.

“When I came here in 1994, a woman in the kitchen meant, ‘Oh, you want to be a pastry chef.’ And I’d say, ‘No, I’m a chef.’ They always wanted to give women the easy jobs. They never considered having us on the hot line.”

Potential employers looked at Jordan de Cabral’s background and training and told her she was overqualified.

“My English was horrible then,” she says, “so I’d think, ‘Great, great, great.’ In Spanish, when you say ‘You are overqualified,’ it’s a good thing. I would come home from those interviews and my uncle was laughing. He said, ‘Nobody’s going to call you. They’re not going to hire you.’”

Eventually she found a job in the kitchen of a couple from California, where she worked for years, and did a stint in another restaurant, but she always dreamed of having her own place. In 2005, the same year she became a U.S. citizen, that dream finally came true. Jordan de Cabral launched La Trattoria Cafe Napoli in Fort Myers, and as the rave reviews came pouring in she rocketed to restaurant royalty.

“It was bam, bam, bam,” she says. “Lucky me. Everything has been a gift, I’m telling you. When my neighbor in Cuba found out I was in culinary school, she said, ‘A chef? She doesn’t even know how to boil water.’ But I always knew it was a passion for me.”

Ten years after La Trattoria opened, in 2015, Jordan de Cabral launched a second restaurant, Mermaid Garden Cafe, in Fort Myers. Painted in cool mint tones and outfitted with chandeliers and antique place settings, the breakfast and lunch café showed off some of the culinary creativity that has made her famous in the area, dishes like chorizo with kale and sweet potato hash, serrano pepper polenta and tacos stuffed with jicama chicken salad.

Though Mermaid Garden closed in early 2018, La Trattoria continues to draw crowds in and out of season. Some of her most popular dishes there include the tortellacci filled with veal ragout and finished with roasted garlic, plums, shallots and madeira wine, as well as her paella à la tierra made with chicken, chorizo, pork and pancetta. Today Jordan de Cabral has turned over much of the day-to-day running of the restaurant to her staff and chef, and she spends much of her time leading groups on culinary and artistic tours of Cuba. She doesn’t advertise these trips, and she doesn’t have to. Word has spread among a certain set, and she’s already booked through May of next year.

Kevin Pierce and his wife, Cindy, have known Jordan de Cabral since she first launched La Trattoria, and they joined her last year in Havana. Pierce’s No. 1 rule for a great trip to Cuba? Have Jordan de Cabral lead it.

“We woke up every morning to a breakfast on the patio, the likes of which we’ll never have again,” Pierce says. “Uncanny amounts of fruit and fruit juices, eggs and bacon, Cuban bread. We’d have breakfast, then some sightseeing during the day, an early dinner at a place that Gloria has scouted out and then come home for a disco nap. Then we’d go out to the clubs at night for dancing and music. To be among some of the first to go to Cuba and to see it through Gloria’s eyes—it’s fabulous.”

For Jordan de Cabral, the trips to Cuba offer her a chance to show off her birth country.

“What you’re going to see is a beautiful sadness,” she says. “I show that we’re not ignorant; we’re very highly educated people. We’re a very proud people. There is so much talent. If these people can cook this food with these three things, imagine if they had a whole supermarket. Artists, doctors, chefs—everybody works very close together. They have to get up every day and say, ‘How am I going to survive? What am I going to do to make it better?’”

Between her restaurant and her trips to Cuba, Jordan de Cabral stays busy (her twice-a-day Cuban coffee routine helps keep her going). This year, though, she decided to take the summer off.

“I said, ‘No summer.’ Otherwise, my husband would kick me out of the house,” she says, laughing.

Her husband, Brian Jordan, is originally from Buffalo—“You cannot get more American than Brian”—and the two met shortly after she moved to Fort Myers. He’s an accountant at Gartner, “super-smart in the numbers world,” as she puts it, and “such an amazing man.”

“He’s very patient,” Jordan de Cabral says of her husband. “People are always telling him, ‘You’re Gloria’s husband? Oh my God, how can you handle that woman?’ He says, ‘I’m her balance.’”

She tells a story about a painting of a bull and a rose that hangs on the wall of La Trattoria. The rose, a friend of her husband’s teased, was Brian. And the bull? Well, that’s Gloria.

At the trattoria, the kitchen fills with the smell of frying garlic and Jordan de Cabral is still at the cutting board, her chef’s knife flashing, her silver jewelry sparking and that electric smile lighting up the room. The heels on her boots make sharp clicks against the floor as she moves, and outside the heavy double doors to the kitchen, the restaurant—her restaurant—is waiting.