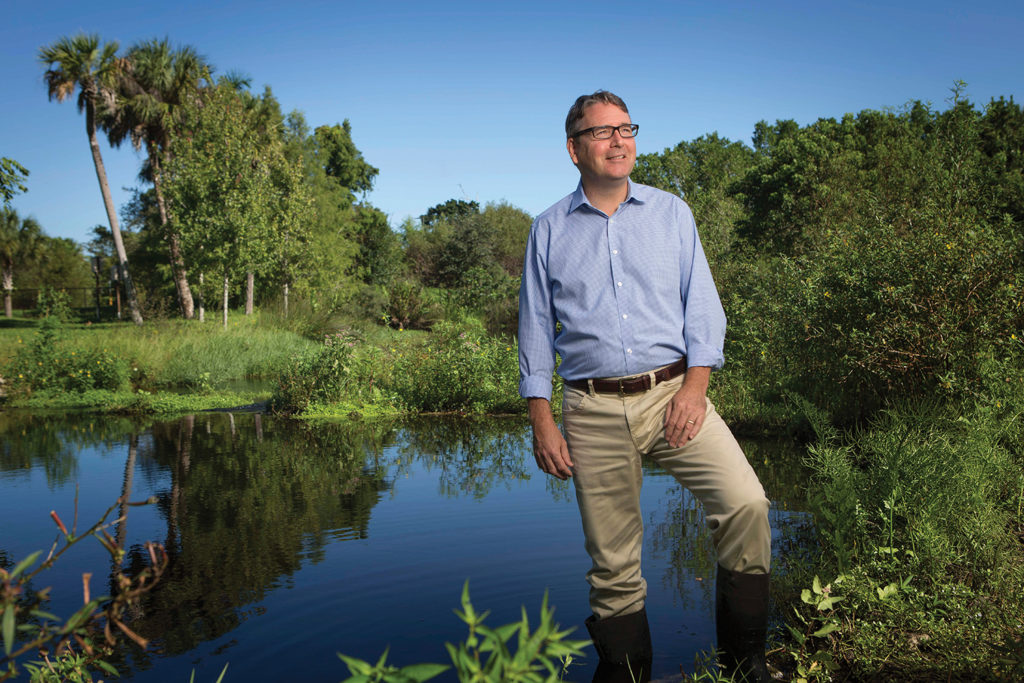 On a warm fall day in the middle of the week, Rob Moher makes the rounds of the Conservancy of Southwest Florida, where he is president and CEO. Dressed in khakis and a button-down shirt with brown leather oxfords on his feet and a pair of glasses perched on his nose, he looks more like a schoolteacher than an environmental crusader. When he talks—and he talks to everyone, staff, volunteers and interns alike—he is friendly and genuine, not so much soft-spoken as gently spoken. It comes as no surprise when he says that if he hadn’t gone into environmentalism, he would have become a diplomat.

Tom Campbell was on the Conservancy’s board when Moher applied for the development director position, and he says Moher is one of those rare environmentalists who can work with all sides. Campbell knew Marjory Stoneman Douglas, who wrote River of Grass and was one of the most powerful forces for early environmentalism in this state, and says that, in many ways, Moher has the same effect on people.

“One of the great things about Marjory,” Campbell says, “was that on the few occasions she spoke in front of the Florida Legislature, when she walked in the door you could hear a pin drop. This was back in the old days when it was a rough bunch. No matter what the various interests of the people there were, they had the utmost respect for her and what she said. I would say Rob has followed in those footsteps. Even the people he has to go up against sometimes, when it comes to that, like Marjory, they have total respect for him and they know he has no agenda other than to protect the environment.”

With red tide, blue-green algae, climate change and sea-level rise all threatening the state, Moher’s expertise and his ability to connect with people of all stripes is more necessary than ever.

Moher, who was born in Montreal, got his first taste of serious environmental awareness in 1990, when he taught English at an industrial glass factory in Czechoslovakia. It was a pivotal moment for Moher, a time that turned him from someone interested in the environment and economics to what he calls “a hardcore environmentalist.” He was living in northern Czechoslovakia—“the triangle of death,” in local vernacular—where acid rain and runoff from factories had wiped out the forests. The air pollution was so bad that streetcars carried flags to let people know the air quality on any particular day. Green was a good day. Yellow was not so good; kids should be kept indoors and adults should consider staying home from work. Red was a bad day; people put their health at risk if they ventured outdoors.

“There were a lot of red and yellow flags when I was there,” Moher says. “It was a hugely eye-opening experience.”

During his stay, Moher crossed paths with people who had been involved with the 1989 Czech revolution, and he saw how environmental issues had been a catalyst for change.

“When you have a state-owned industry and that industry pollutes the environment, it’s not like the state is going to fine itself. People started to ask, ‘Why are these factories being let off the hook?’ People there, they love their forests, they love to ski. It was pretty personal. The environment became a huge driving force for social and political change. When I fast-forward to today, it all makes sense—the connection between human health, the environment and the economy. The lesson from that experience, for me, has become my mantra in life. The idea that the environment is off to the side and the economy is in its own circle and human health is in its own circle is the biggest myth we have to dispel. Anyone who tries to open their sliding glass doors during a red tide outbreak can tell you that they’re connected.”

On the Conservancy’s science floor, Moher chats amiably with a biologist about sea turtle nests on Keewaydin Island and how the biologist’s blog posts help boil down the complexities of environmental issues for the public to understand. Moher calls him a “poet biologist.” Then it’s on to the python lab, empty now but full of evidence of the python team’s work—piles of taxidermied python eggs, the skin of a 16-foot python stretched the length of one wall, a chart that shows the staggering amount of wildlife consumed by a single python.

“This is what it takes to become a 16-foot python in Southwest Florida,” Moher says, pointing to the chart. “And that’s why we’re spending so much money on this issue.”

From there he walks outside and through the campus to the von Arx Wildlife Hospital, where the Conservancy cares for sick and wounded wild animals. The hospital sits across the lake from the Naples Zoo, and the chattering of monkeys carries over the water.

Inside the hospital, Moher stops to speak to the veterinarian, praising her approach to animal care, how she combines Eastern and Western medicine, and then, gently ribbing, he says, “And it’s been known that if you have a personal medical complaint, you can swing through.”

The veterinarian laughs at his teasing. “I don’t normally do humans,” she says, “but in a pinch…”

They banter back and forth, and then Moher continues on, saying hello to the staff as he passes.

“Typically, when I’m here, I try to be very sensitive,” he says. “I watch their body language. If they’re trying to save an animal’s life, I’m not going to ask them how their weekend was. It’s a lot of work and a busy, busy place.”

The clock is ticking on Moher’s tour—“They let me out of my office for a short 1-hour window,” he says, laughing—but still he pauses to speak to an intern who is sunning a snake outside.

“Which snake do we have here?” he asks, peering through his glasses.

“This is Monty, our ball python,” the young woman says as the snake swirls around her arm.

Moher peers at her name tag and reads it aloud. “Emily. Where are you from?”

“I’m from Michigan,” she answers.

“I had an interview with AmeriCorps last week, but I’m still waiting to hear back from them.”

When he finished his teaching stint in Czechoslovakia, Moher returned to Canada to earn his master’s degree in environmental economics. From there, he was offered a position with the Bahamas National Trust as regional director of the northern Bahamas.

“That was a formative experience for me,” he says. “I learned pretty fast that without money, nothing happens in nonprofits.”

Moher and his family spent six years in the Bahamas before he took a position with the Conservancy as its development director.

“I was the fundraising guy,” Moher says, “and much to my surprise, I loved it. I’d get to take people out and find out about their passions, ask who got them interested in the environment. If no one, then it was my job. First you’ve got to get them to fall in love with the thing you’re seeking to protect. It’s pretty hard to stop passion. Once someone sees the problem, it’s just about unleashing them. And it’s not through a PowerPoint. You’ve got to get them on a boat or get them in a kayak or get them on a swamp walk in the western Everglades.”

He proved to be excellent at fundraising, helping the Conservancy grow from an operating budget of $2 million a year to $7 million. In 2011, led by the Conservancy’s Capital Campaign Committee, he helped successfully complete a $38 million capital campaign, the largest in the Conservancy’s history.

In June 2013, he was promoted to the Conservancy’s chief operating officer, and in October of the same year he became its president and CEO. Since then, he’s worked to build relationships within the community, both promoting the Conservancy’s mission and helping other organizations achieve theirs.

Dr. Kamela Patton, superintendent of Collier County Public Schools, has served on the Conservancy’s board for the last three years and worked with Moher directly to bring environmental programming to the schools. She easily ticks off words that describe him: passionate, partnership and relevant.

“Rob is very passionate about the belief and mission of the Conservancy,” she says, “and he knows how to facilitate partnerships very well.”

Patton points to a program last year where Barron Collier High School students were able to watch a live video conference of a python necropsy from the Conservancy’s python lab.

“When pythons are big,” Patton says, “it’s big for kids.”

Moher was an integral part of bringing to the schools that unique insight into the species’ news-making invasion, as well as bringing similarly on-point programs.

Moher is someone who has always been drawn to natural places, whether it’s camping in the Canadian Rockies or snorkeling in the Bahamas, and he speaks of the outside world with a quiet reverence.

“There’s something really fundamental and connecting about being in nature that makes me feel connected to the landscape I’m living in,” he says. “I couldn’t go from an apartment to the supermarket to the mall. We live in an ecosystem.”

When he speaks of this ecosystem, he means both the natural world that surrounds us and also the way we’re all connected, how issues that affect the environment affect everyone, not simply environmentalists. The recent blue-green and red tide algae outbreaks are a striking example.

“This is the worst outbreak Florida has ever seen,” Moher says. “The impact on marine life is catastrophic. Dolphins, sea turtles, tons of fish. Literally, tons of fish. You see these mature female sea turtles washing up dead, and you realize not only is that one sea turtle dead but her entire reproductive capacity is gone. I don’t need to be an economist to look at Fort Myers Beach and see that they’re losing millions of dollars a week in lost tourism. If you can’t swim, if you can’t eat the fish, if you can’t open the sliding glass door to your condo, this is impacting your life in a way that’s pretty profound.”

But even here, as with all issues he confronts at the helm of the Conservancy, Moher brings the great power of his diplomacy to bear.

“We as a conservation organization—and myself as a leader of one—see this as a crisis but also as an opportunity. We can say, ‘We’re all in this together. This is the same boat; we need to row in the same direction.’ We need to look at what’s the root cause of it, what’s natural and what’s man-made, and what we can do in the future to prevent these horrific outbreaks. That’s where the opportunity lies. If we take care of our land, our water and our wildlife, then our future is secured. If we ignore those things, then our future is in jeopardy.”