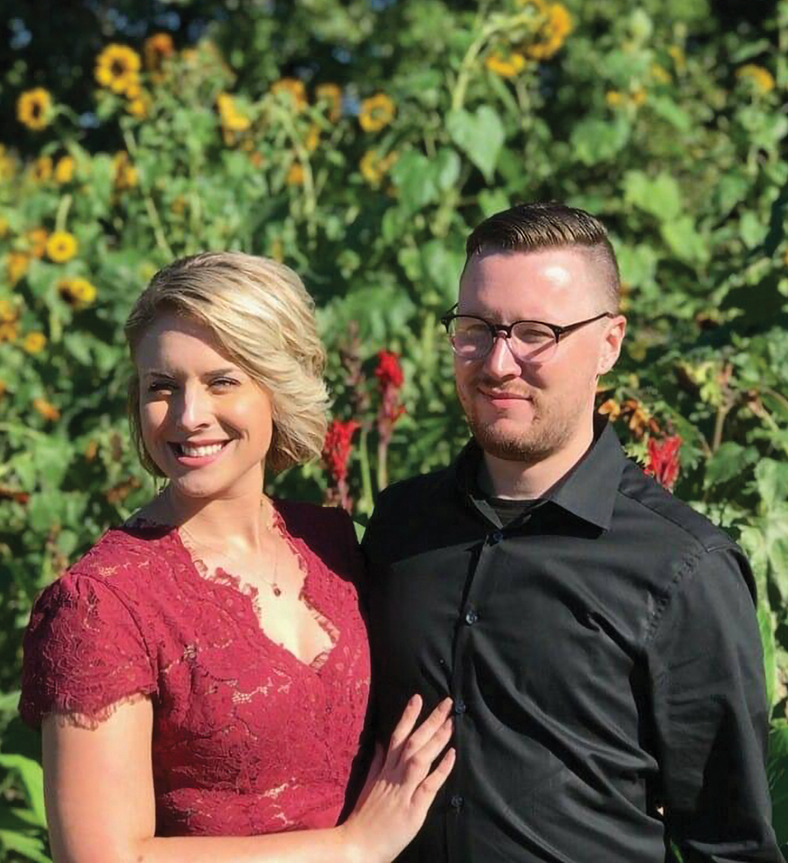 Observant viewers on NBC2 noticed in October that news anchor Amanda Skrzypchak had some bling on her left hand. Her longtime boyfriend, Matt Hildeman, is now her fiancé. Popping the question wasn’t exactly a surprise, though. Amanda admits that Matt isn’t a planner, so her journalistic instincts kicked in when on a Saturday he’d planned a beach trip and looked different. “He was rocking a moustache for four days prior, which I hated, and that Saturday he shaved his face.” After they watched the sunset go down from one of the Sanibel Causeway beaches, he leaned in with a ring and asked if she wanted to get married. When she looked at the ring, Amanda noticed the center diamond was from her grandmother’s engagement ring in a marriage that spanned 40 years. Amanda of course said yes, and later she thanked Matt for not getting down on one knee—because “overly friendly women” sat next to them who would have probably created quite the scene. “It was nice because even though there were so many people around, it was just him and I in that moment,” Amanda remembered. “That’s what it is after everything. Just us.” The couple is planning a December 2019 wedding, and Amanda says she’ll keep the same last name on the air.

From Irish to Italian! A Lee County landmark on Tamiami Trail is getting a new tenant. The castle-looking building that has housed Dwyer’s and Tilted Kilt is now Leopardi Italian Restaurant. The founder and owner of Cornerstone Builders of Southwest Florida, Anthony Leopardi, is now focusing on food with his wife, Gina Leopardi, who will bring her family recipes straight from northern and southern Italy.

FGCU alum Brooke Sweat is teaming with legendary volleyball player for Team USA Kerri Walsh Jennings for the 2020 Olympic Games in Japan. Now at age 40, Walsh Jennings will turn to the 32-year-old Sweat for her defensive prowess in digging in for Walsh Jennings’ potential sixth Olympic run.

Awareness over our water plight reached national levels and in October even brought celebrity activist Erin Brockovich to the Burroughs Home in downtown Fort Myers, where she heard from businesspeople and concerned citizens. Incredibly down-to-earth, compassionate and ready to take action, she drew quite a crowd. Jennifer Nelson, who runs the Burroughs Home for the Uncommon Friends Foundation, handled the event beautifully—and even received a pretty bouquet of roses a few days later from Erin along with a lovely thank-you note. Well, we thank you, too, Erin, for caring and being here for us.

There’s no denying it: It was a tough summer and fall along our beloved Gulfshore. Water challenges had both Lee and Collier counties seeking relief and answers. And it seemed that everyone tried to do his and her part to help. When word got out that Sanibel and Captiva islands were struggling and that tumbleweeds were virtually rolling down Periwinkle Way, a big group of community supporters descended on the island. It didn’t matter to them that the beaches weren’t looking their best or that the Gulf waters weren’t safe to swim in due to red tide and the blue-green algae runoffs from Lake Okeechobee—they crossed the causeway anyway, ready to spend money. With each stop at a resort, shop or restaurant, they took photos and posted them on social media with the hashtags #OneLee (developed by the Lee County Visitor and Convention Bureau) and #SWFLChallenge (the collaboration of a group of local marketing pros). I was thrilled to join a big group that included artist Stephen Blancett and local restaurant owners Mark Blust (the Prawnbroker Group) and Jay Johnson (Bubba’s Roadhouse). There was 93X radio announcer Sadie Barbara, philanthropist and volunteer Marc Collins, Terry Tincher of The Laboratory Theater of Florida with his wife, Mimi, and too many more to count. On Saturday night, we took over Keylime Bistro on Captiva, and Sandy Stilwell Youngquist, along with her husband, Tim, welcomed us with open arms. Sandy and Tim do so much for the community, so we were happy to fill up one of her restaurants—and the Key lime pie was to-die-for!

People support and pay tribute to our little corner of Southwest Florida in a variety of ways—as did NBC2 anchor Rachel Pierce. We know her as an excellent reporter, but it was a surprise to learn that she’s a brilliantly talented artist. In fact, one of her paintings depicting a fabulous Florida underwater seascape was chosen as one of the live auction paintings for the Arts for ACT fine arts auction to benefit Abuse, Counseling and Treatment Inc. And as if she isn’t busy enough on the news, she and her husband, Matthew, are parents to three young children and another on the way. Painting for Rachel is a labor of love.

Theater isn’t labor for Greg Longenhagen, the new artistic director of Florida Repertory Theatre, the longtime Southwest Florida artistic gem. In fact, he’s happily made a living doing what he loves for more than 30 years. Greg recently took over at the Rep after the exit of Bob Cacioppo, who founded the theater in 1998. But Greg’s no stranger to the successful downtown Fort Myers regional theater—he’s acted and directed for and been part of the founding company since the beginning. If anyone has what it takes to take Florida Rep into the future, it’s Greg.