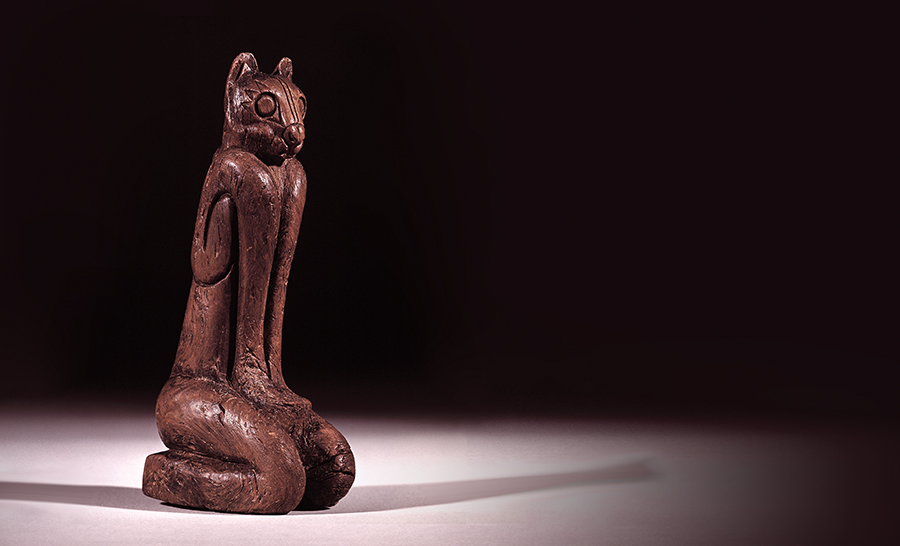 Twenty-five years ago, a group of Marco Islanders formed a historical society, determined to save their town’s past from slipping away like an eroding beach. But there was another motivation, too. They wanted their cat back.

The Key Marco Cat, a wooden Calusa icon, had been unearthed in 1896 by archaeologist Frank Hamilton Cushing in what would become regarded as the most important archaeological dig in Florida history for the volume of artifacts, their condition and insight into the elusive tribe.

Cushing packed the cat among 11 barrels and 59 boxes worth of artifacts, and shipped it north, the treasure ultimately to be divided between the Smithsonian Institution and the University of Pennsylvania. The cat has visited Southwest Florida twice—during Marco’s millennial celebration in 1999-2000 and during the centennial of Cushing’s expedition. During neither time was it housed in Marco’s historical museum, which had yet to be built.

As the Marco Island Historical Society members determined their goals, they fixated on the idea of displaying the cat, not forever perhaps, but at least for a grand display, a historic homecoming. They would go on to raise $4.5 million and build a museum. In the main exhibition hall, they’d install three jewel case-style display windows. They imagined one day the cat would sit in the center one.

On Jan. 26, the Marco Island Historical Museum will host an opening celebration for a new, two-year exhibit of Cushing’s artifacts. It’s the first time a group of Cushing’s finds will be displayed together on their island birthplace since 1896. Yes, the Key Marco Cat will occupy the center display case.

“Everyone always says, ‘Our cat.’ ‘Our cat is coming home.’ Everyone feels it’s theirs because they played a part in it,” says Tish Champagne, a historical society board member and major donor. “For everybody who donated even $10, it’s their cat.”

“We’ve had big exhibit openings in 2015 and 2016 and everyone gets excited for them,” says Austin Bell, the museum’s curator. “But everybody then asks, ‘When’s the cat coming back?’”

Marco Islanders Craig and Bonnie Woodward, in a single night, raised $2 million with a Dancing with the Stars-inspired fundraiser for the museum’s capital campaign. “This was grassroots—this was from everyone on the island,” says Pat Rutledge, the society’s executive director.

There’s even a craftsman in Naples, Peter Sottong, who carves remarkably true-to-life replicas of the cat—he chiseled his 1,000th one last summer.

The icon, incidentally, stands barely 6 inches tall—a “little troublemaker,” jokes Bell, who is in charge of the myriad preparations that must be made to ensure the exhibit’s security.

To understand the buzz, let’s go back to Cushing’s groundbreaking expedition and what the archaeological finds revealed.

The first hint of Marco’s archaeological treasure was unearthed in 1895 by landowner W.D. Collier near what is now the Old Marco Inn. At the time, Collier’s property was separated from the mainland by a canal. Collier took his discoveries—pieces of wood, cordage and shell items—to an acquaintance at University of Pennsylvania’s Museum of Archaeology and Anthropology. As fate would have it, Cushing, an ethnographer and archaeologist, was on leave from the Smithsonian to seek treatment from his personal physician, Dr. William Pepper, the UPenn provost and founder of the museum. When Cushing, who was known for his studies of the Zuni tribe in the Southwest, overheard the conversations about Collier’s find, he immediately volunteered to lead an expedition. The subtropical air, he argued, would be good for his health.

Cushing and his team arrived on Marco on Feb. 26, 1896. For about 2½ months, the excavators dug “inch by inch and foot by foot, horizontally through the muck and rich lower strata, standing or crouching the while in puddles of mud and water,” Cushing wrote in his journals.

The archaeologist had the foresight to bring along a young photographer and artist named Wells Sawyer. Lacking modern conservation techniques, some artifacts began to disintegrate upon exposure to oxygen; Sawyer’s color sketches and his black-and-white photography serve as important documentation.

Excavators found hundreds of items—from everyday tools to masks to carvings. The cat was the prize. Cushing in his journals described it as a “man-like being in the guise of a panther. Although it is barely 6 inches in height, its dignity of pose may fairly be termed ‘heroic,’ and its conventional lines are to the last degree masterly.”

The cat, along with other pieces of art, upended assumptions about the Calusa.

The belief had been they were a simple hunter-gatherer people, says William Marquardt, the curator emeritus of the Florida Museum of Natural History who spent his career studying the Calusa, including at Pine Island’s Randell Research Center. “Then you see this amazing artwork and the skill of people who carved and painted and engraved.” The finds revealed the Calusa as artisans, similar in sophistication to civilizations such as the Egyptians and Syrians.

The Key Marco Cat, in Marquardt’s opinion, is Florida’s most important archaeological find—the object that put South Florida archaeology on the map. The cat even was immortalized on a postage stamp in 1989.

In the decades since the Cushing expedition, other archaeologists have looked for and hoped for similar discoveries within the Southwest and South Florida regions they were known to inhabit, but none has struck anything remotely close to the same trove.

Scientists still know relatively little about the Calusa because the tribe disappeared, wiped out of South Florida by disease and displacement.

“The more we learn, the more we want to know,” Marquardt says. “There is much, much more to be learned.”

The mystery only adds to the allure, he says.

And that’s why the historical society is bracing—excitedly—for unprecedented visitor response.

“It’s kind of like field of dreams; ‘If you build it, they will come,’” says Woodward, a self-described local history buff who has lived on Marco for 50 years. “People have the history of wherever they came from. … They don’t know the history here, and they are surprised to learn the island’s history goes back that far. They think it starts in 1965 when the Mackle Brothers started to develop Marco.”

Housing the exhibit is no small task. Bell, the curator, says the museum has had to meet Smithsonian standards for environmental controls, adjust lighting, purchase a generator, and schedule a security guard to monitor the artifacts whenever the museum is open. The county is assisting with some of the needed funds; the historical society continues to actively fundraise.

Beside the cat, the exhibit will include two animal figurehead carvings, an alligator and another animal, which to some looks like a sea turtle and to others resembles a peregrine falcon. Bell hopes to encourage discussion among visitors as to which camp they fall into. There’s a mask that has trace remnants of paint, and there’s an etching of a dancing figure. A replica of Cushing’s desk will also be on display.

In addition, the museum has hired archaeologist and artist Merald Clark of the Florida Museum of Natural History at the University of Florida to colorize the Marco Island museum’s black-and-white sketches of Calusa life, offering visitors more realistic and eye-catching renderings of their daily rituals. There will be additional interactive components, with an eye toward young visitors, and some additional artwork by Creative Arts Unlimited, a design firm in Pinellas Park.

Champagne, the board member and benefactor, says museums play a critical role—and one that threatens to be overshadowed by the ubiquity of online research and what she fears is a lessening interest in seeing cultural objects in real life.

“I think the cat just symbolizes that there are these wonderful things that were created thousands of years ago, that were meant to be found, and we can be a part of bringing them to a place where people can look at them and dream. It can set their imaginations on fire,” she says.

The exhibit’s grand opening will be celebrated on Jan. 26 from 9 a.m. to 4 p.m. The free event will include Calusa-inspired music and storytelling by musicians Kat Epple and Nathan Dyke, along with other family-friendly activities. Regular museum hours are Tuesday through Saturday, 9 a.m. to 4 p.m. For more information, visit themihs.info/museum or call 389-6447.