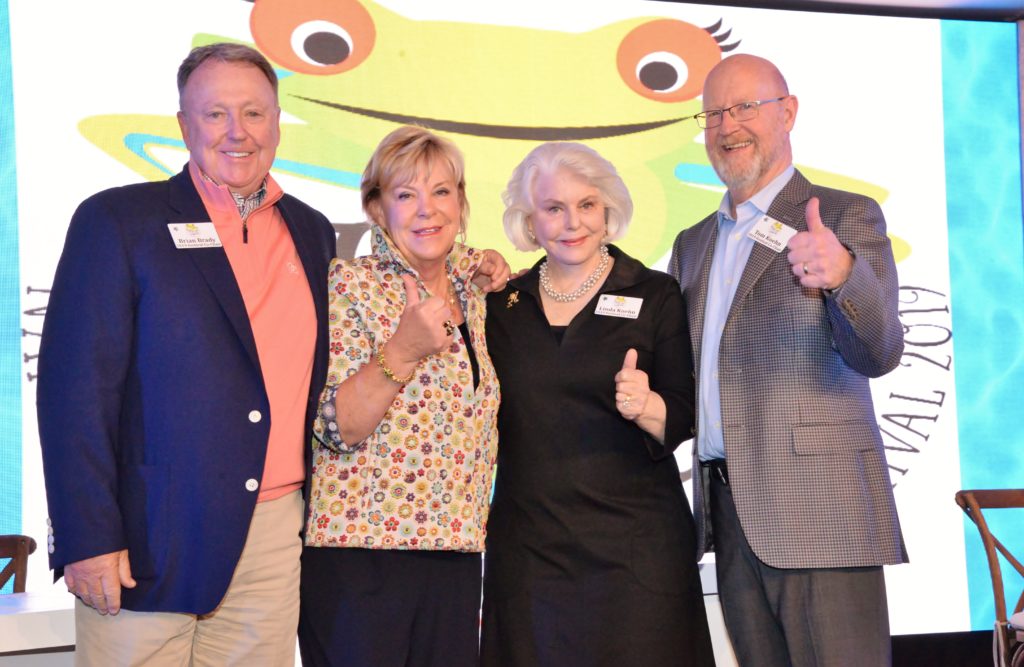 There were bidding wars, endless rounds of the finest wines money sometimes can’t even buy (a signed Jeroboam of Far Niente from 2000, anyone?), and nothing—not even spells of rain and relative cold that made Floridians resort to boots and fur vests—could dampen the spirits of the 2019 Naples Winter Wine Festival. The event is Southwest Florida’s premier of its kind, a long weekend of celebrating, socializing and fundraising that was chaired in its 19th year by Jeannelle and Brian Brady and Linda and Tom Koehn. A colossal cache was raised by the more than 600 attendees during the signature live auction Saturday, Jan. 26—just under $16 million, which will be distributed to help Collier County children by the festival’s guiding nonprofit, the Naples Children & Education Foundation (NCEF).

Though technically the festival and its $12,500-per-couple tickets didn’t officially begin until Friday, two events on Thursday are seen as an unofficial kickoff to the three-day weekend.

Bright and early at 9:30 a.m., dedicated oenophiles who had reserved their spots at this intimate gathering converged on Bay Colony Golf Club for The Vintage Cellar, a one-of-a-kind educational wine tasting, discussion and luncheon. This year’s honored guest was winemaker Véronique Drouhin-Boss, of Maison Joseph Drouhin in Burgundy and Domaine Drouhin Oregon by Véronique Drouhin-Boss, who treated the crowd to two rare verticals from her cellars.

Later that evening, an invite-only crowd gathered at Campiello on Third Street South for the annual Grand Crew. NCEF trustees along with select VIP bidders from past festivals gathered to toast the 30 vintners, 18 renowned chefs and 18 Master Sommeliers who had flown in from far and wide to volunteer their time and services over the next few days.

To the organization’s trustees—and anyone who makes the effort to go—it’s clear that Meet the Kids Day is the heart and soul of the festival. Held this year at Naples Botanical Garden on a brisk yet sunny morning, 39 tents were set up on the grounds, and the most adorable kids—3 years old all the way up to 12th grade—manned them to talk about the programs they participate in that receive funds from the NCEF. “This is the most important part of the whole weekend—everyone wants to give [during the auction] after seeing the children and their smiling faces,” said 2019 co-chair Jeannelle Brady. “I told all of my out-of-town guests that it was a prerequisite to go—no dinner, no auction, if you don’t go to Meet the Kids Day.”

After a presentation that featured two teenage speakers, everyone was treated to lunch catered by The Continental (including a divine Swiss chard gratin and their famous Piedmontese beef) with bottomless pours of exclusive, small-production wines from Grace Family Vineyards, Kinsella Estates, Lingua Franca and Vice Versa.

You might have noticed that 18 is a lucky number around here (18 chefs, 18 Master Sommeliers)—and that’s because Friday night there were 18 Vintner Dinners. The 600 festival guests were divided into groups of roughly 30 for “spectacular”-doesn’t-even-cut-it private parties hosted by trustees in homes across Naples, with multi-course meals by award-winning chefs paired with wines from a selected vintner. The parties were a play on the festival’s “Joy to the World” theme. For example, the “Mardi Gras Joy” dinner featured Carnivale-style masks and a living wall with performance artists slipping people glasses of wine. Jim and Laura Dixon, who had specifically requested chef Dustin Valette of Valette in Healdsburg for their gathering, took joy in eating his whimsical courses (like Duo of Scallop, where pounded scallop crudo formed a “ravioli” with scallop ceviche inside) and popping open not only Darioush wines but their own private reserves of Louis XIII cognac.

LIVE AUCTION and WINE DOWN

Despite dreary weather, excitement built early at The Ritz-Carlton Golf Resort, Naples. A cocktail reception at 11 a.m. featuring 10 stations with the finest hot and cold canapés plus tables of sommeliers pouring wine (including vintages of Opus One dating all the way back to 1980!) helped put everyone in a good mood—so, too, did a lively set from a 10-piece band. By 1 p.m., guests were ushered into the insulated perma-tent on the resort grounds and took their seats at tables as the Southwest Florida United Community Choir of Fort Myers belted out energizing numbers.

There were 63 auction lots in total, and bidding started off with a bang. The first prize, a collection of magnums from each participating vintner, went for $170,000. Another wine lot that made a huge splash was a vertical of eight Screaming Eagle double magnums from the ’90s, some of which are not even available on the market, yielding an expectedly high $350,000.

One of the auctioneers, Lydia Fenet (she and Humphrey Butler switched on and off all day), joked that her grandmother said the only things to do on a rainy day are drink and spend money—and spend money they sure got people to do. A Barbara Banke-guided weekend at the Kentucky Derby incited a bidding war between the Morans and the Tolers, ultimately going to the Morans for $240,000. And Michael Brenner got to high-five his table when he came out on top with a first-edition, design-your-own Bentley for $550,000. Another lot that wowed was a four-person trip to the Tokyo Olympics with all the bells and whistles (including a backstage tour of the NBC studios), where Don and Darlene DeMichele went in with Joan and Bill Martin and emerged victorious at $340,000.

The auction ended on a high note with a gripping call for everyone in the room to contribute to the fund a need, the NCEF’s “Beautiful Minds, a Children’s Mental Health Initiative.” More than $3 million was tallied in the final few minutes, providing a sentimental rush to end the day. “I am passionate about the fund a need—it gives funds specifically to an area of the community that is in desperate need of services—screening, early identification and giving help to those who need it before it becomes a problem,” said co-chair Tom Koehn.

Then it was time to let loose with the annual Wine Down. It’s an after-party where the top button of shirts may come undone, or someone might sip a can of beer—or take a swig from a signed Jeroboam of Far Niente cabernet, as patron Ashley Gerry jokingly pretended to do. Jeff Gargiulo, one of the festival co-founders, a Neapolitan and a participating Napa Valley vintner, is the guiding force behind the celebration, assembling a band to play each year. Attendees danced to live jams, raised their glasses and feasted on a buffet catered by Jimmy P’s with filet, cowboy beans, garlic mashed potatoes, and mac and cheese.

With the weekend wrapping up, the auction tent was transformed into a breakfast to end all breakfasts, with a football field’s length of chafing dishes, pastries, cold platters and, yes, more phenomenal wine.

The organization also announced the theme, date and co-chairs for next year’s event. It will be “20 Years of Cheers” for the vicennial anniversary Jan. 24-26, 2020, with trrustees Barbie and Paul Hills, Nancy and Joe Masterson, and Shirley and Peter Welsh (pictured).

With more than $191 million raised over the span of two decades, everyone acknowledges that a necessary part of “making it big” is keeping funds coming in to provide the crucial support needed for children’s services (we’re one of the few counties in the nation where the local government doesn’t budget even a penny). “I’ve always worked so hard, but it’s an overwhelming sense of responsibility,” said NCEF CEO Maria Jimenez-Lara. “You are always trying to do better, and there are constant opportunities to improve.”

Above photo by Tony Zollo