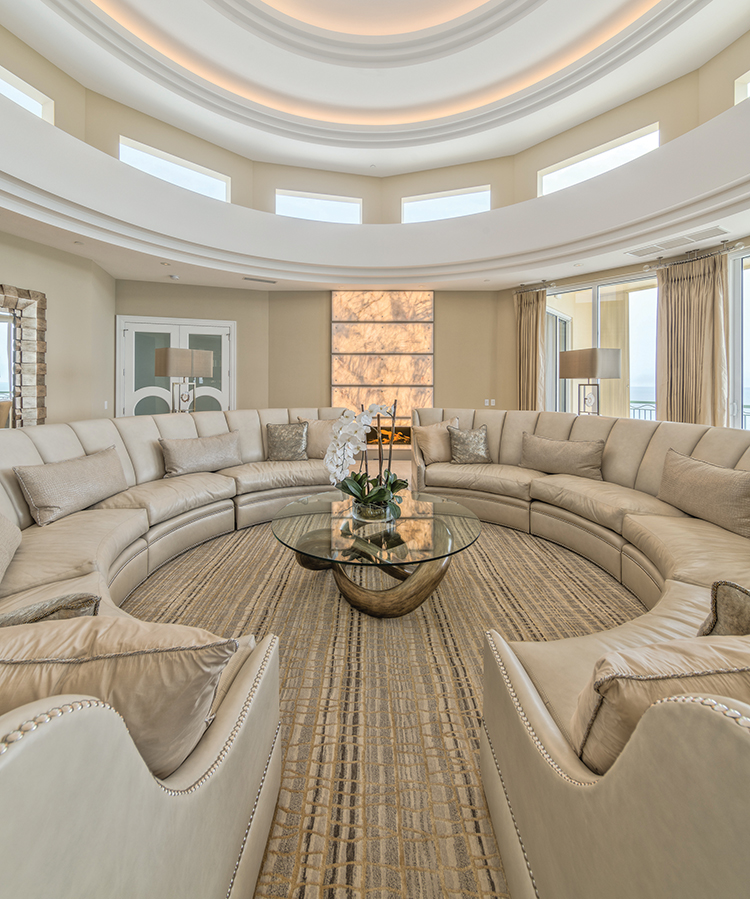 When the elevator doors open to this 25th-floor penthouse on Marco Island, it’s safe to say you’ve officially arrived. As one-third of the top floor of the tallest building on Marco, this just-under-10,000-square-foot abode was recently renovated by its owners, Patti and Mike Hennessy of New Jersey, utilizing the talents of designers Charlie Hansen and Rebekah Errett-Pikosky of Clive Daniel Home. The Hennessys, who’ve been coming to Marco Island since 1983, had kept a smaller unit lower in the building for years before the previous owners of this space decided to sell. Once the paperwork was signed, the once Tuscan-themed space was gutted to its shell and reimagined into the five-bedroom, five-and-a-half-bathroom showplace you see here. “It was much more formal and compartmentalized,” says Patti, who considers interior design a hobby. “The ceilings were lower and had a lot of wood beams. There were faux paintings, plaster on the walls, dark colors, heavy brocade fabric drapes and Tuscan flooring.” Luckily, those days are gone. With the help of 41 West on architectural design and construction, the ceilings were raised (they reach a whopping 26 feet in the circular living room), walls were taken down, elegant neutrals were added, and light finally was allowed to filter through the home, creating a modern, elegant space. That openness also grants amazing views from a variety of locations. You can even see the Naples skyline. “I
Subscribe Now and unlock unlimited digital access.
Already a subscriber? Sign In.