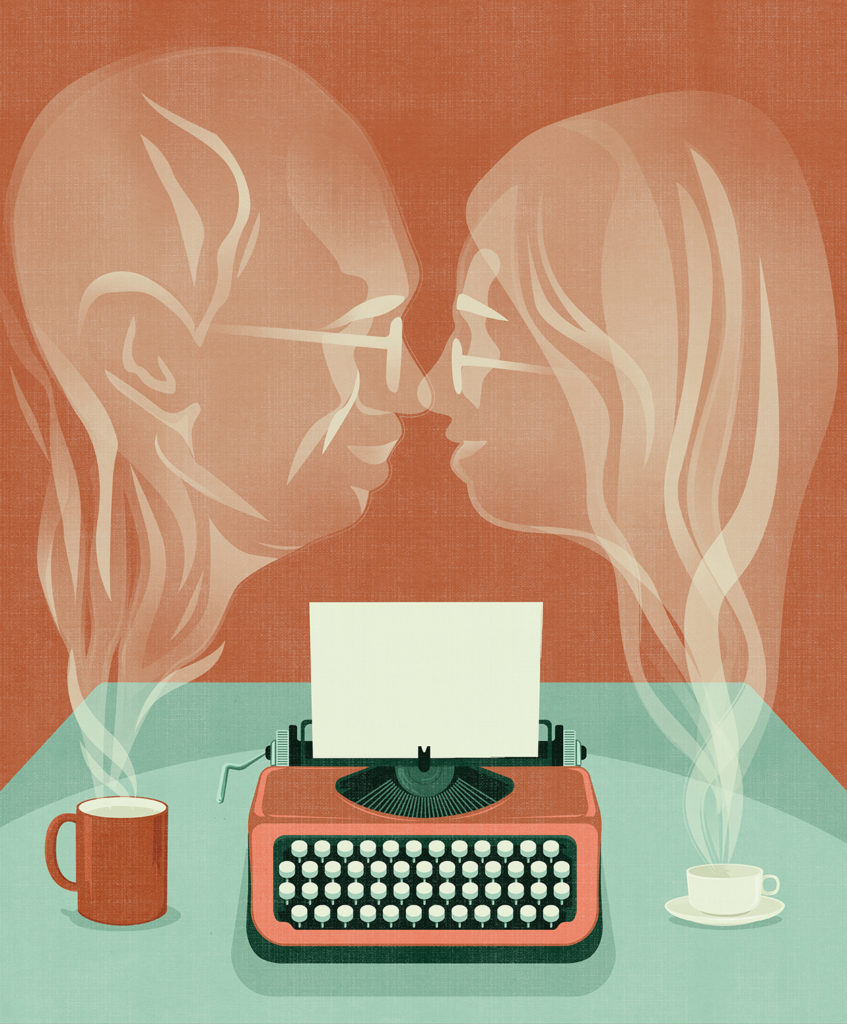 Poet Beth Ann Fennelly once wrote that middle-aged love doesn’t capture our culture’s attention. That’s fine with me. Let the movies have young love. We have lore.

We have the freakin’ lore.

We had been married 10 years when the truck crashed into our living room in Hollywood, Florida. There was a terrible explosion, and a torrent of liquidized cinder block pouring so fast into the house that I thought some giant pipe had burst. Jagged slabs of marble from the windowsill skated to a stop on the tile. The large, hissing nose of a white Ford F-150 was parked in our house. The sweet smell of antifreeze.

I was just beginning my afternoon Introduction to Nature Writing course at Florida Gulf Coast University. My colleague and friend Jim Brock interrupted class and asked if he could speak with me for a minute. The first thing he said was, “Lyn’s fine.” The second thing he said was, “But a truck crashed into your living room.” The whole time I drove home, I held these two seemingly opposite things in my head: Lyn’s OK and a truck crashed into your living room. I couldn’t reach her. I imagined a furniture truck or a big U-Haul. I imagined the second floor of our house caving in. I held on to “Lyn’s fine” for 120 miles.

Outside, neighbors gathered on the street and watched and pointed. One well-meaning neighbor called 411 and handed me the phone. “What city?” the recording asked. The driver crawled out of his truck and onto the grass. EMTs carried him away, leaving one leather flip-flop on our lawn. Police came inside. One said, “Lady, you don’t keep a very clean house.” A building inspector, upon seeing the Ford, said, “Good thing it wasn’t a Chevy.” Then a good friend from down the street arrived to see about me and ask how he could help.

We found out later that the driver had prescriptions for Xanax from several different doctors. He was unhurt in the accident. But long after the crash, I kept an eye on his house five doors down the side street that had served as an on-ramp to our living room.

Everyone was there, but not Jesse. I wanted Jesse. He was speeding across the Everglades to get home, a 2-hour commute he made twice a week, sometimes three. He did it because I didn’t want to leave Hollywood and because he loved me. He said he didn’t mind the drive.

I didn’t mind the drive and, man, I did love her. I also loved my new teaching job at FGCU. It was my first full-time job after five years of part-time work.

“I’m an experienced driver,” he told me. It was true. A lifetime ago, he drove a bus throughout the Midwest for more than a decade. We joked that this commute across Florida bridged his current life as a poet and teacher with his past life as a driver. He left at 6 a.m. with a tall thermos of coffee and a sandwich; he taught four classes; and he was back by 10:30 p.m. Some great poetry came from those drives.

I drove a bus in and around Chicago. And let’s be clear: I did not drive a city bus. It was a charter coach. I drove to Milwaukee and Davenport and Green Bay and Elkhart. I got lost in small towns all over the Midwest. I drove elderly women from the South Side of Chicago to an Indian Gaming Casino in Wisconsin. They smoked the entire way. I drove a bachelorette party to a greyhound racetrack on the West Side. I drove a bachelor party to a gambling boat in Peoria. On the way back, one of the guys was so drunk he climbed out of the emergency hatch on top of the bus and tried to stand on the roof. I’ll give you one more because I know you want it: I drove a group of chain-smoking Japanese executives from Chicago to Fond du lac, Wisconsin, to tour a frozen fish packing plant.

“If it ever gets to me, I’ll tell you,” Jesse said about the drive from Hollywood to Fort Myers and back. But I knew he wouldn’t. He wasn’t one to complain.

That isn’t true. I’ve always complained about the things that perpetually bother me: the Cubs and losing. Mildew. Florida summers.

Because I didn’t want Jesse to be too rattled when he got home, I tried to straighten up the house to make it look not so alarming. I dragged a broom through broken glass and marble and pulverized what-not before one of the swarming workers sat me down on the stairs. Men came with plywood to cover the hole. A Fox reporter and a cameraman asked the men to wait. They wanted their live shot to include the inside of our living room. “Speed up,” I told the men. I wanted the plywood up for Jesse.

That didn’t work. I was completely rattled.

I tell you this because ours is a quiet marriage and a quiet house. We are writers. The drama happens on the page.

Yes. As long as we’ve known each other, for the most part we’ve respected each other’s writing spaces. These days we have offices. In our grad school days when we first got married, Lyn wrote in the laundry room, pinned between a wall and a washing machine. We had tried to write in the living room together, but when I’m in the same room with her I get distracted. I also liked to throw spitballs to keep from writing.

And I tell you this story because Jesse did come home. He held me close when I shook for days. He took me to the psychiatrist. He shared my outrage two months later when the insurance agent for the driver said they hadn’t determined who was at fault.

Holding Lyn is the sweetest thing in my life. We joked about how unfortunate it was that our living room slammed into that guy’s truck.

One of my favorite questions to ask a couple is “How did you meet?” It’s a guaranteed conversation starter. Their eyes light up and they look at each other as if to say, “How are we going to tell this?” or “How much should we reveal and how much do we keep to ourselves?” It’s a quiet acknowledgment that the story is completely theirs.

When I met Lyn in October of 1995 at a writers conference in the Panhandle, there wasn’t a lot of the usual awkwardness.

I was so nervous. I knew of Jesse already because he was the new, popular, slightly older guy in our graduate writing program. Then I read his poetry. Blues for Diane made me feel physically as if the top of my head were taken off, to steal from Emily Dickinson.

At the conference, Jesse was surrounded by friends wherever he went, and that first night, I trailed along with them. As everyone said goodnight, he and I learned we were the only early risers. I don’t remember which one of us asked. “Do you want, maybe, to have breakfast?”

We went to the Wheelhouse Restaurant on Route 30A just east of Seaside. The placemats promoted oranges, orange juice, each with a big shining orange sun. The place smelled like cat piss, we agreed. In our historical record, we don’t call it the Wheelhouse; it’s the “cat piss restaurant.” The pancakes, though, were good. The crisp bacon was excellent. Waitress Frankie Day told us the story of her life in between trips to our table. She’d had trouble with her husband because he drank too much, but the trouble had recently ended because he died.

I ate slowly because I wanted to squeeze out every moment I could with Lyn. I told her about my life in Chicago, how I labored at a working-class job for 18 years and drank too much until I stopped, completely and, I hope, irrevocably.

That’s why Frankie Day’s story was so resonant with me: Had I continued drinking, I wouldn’t have been sitting with this beautiful woman who laughed so easily at all my jokes. But there I was at the Wheelhouse. Sitting next to Lyn. Watching traffic flash by on Highway 30A. Feeling my whole body tingle.

It’s a cliché, the notion of “love at first sight.” If one of my students were to write a poem that repeated this worn-out phrase, I would cross through it in red pen. But when I met Lyn, I understood why clichés have been pounded out on typewriters and keyboards for so many years. I felt comfortable with her almost immediately. I wouldn’t have said I loved her because I was divorced and suspicious of love. Do I contradict myself? As Whitman would say, so what? I contradict myself.

A week before the conference, Hurricane Opal visited disaster on the Panhandle. Our first walk was at night on the beach, past sand dunes.

Opal had sculpted the dunes into mysterious, beautiful shapes. We were alone under an expansive sky, the glimmering Gulf and the sandy bluffs around us. I told Lyn how much I loved the Chicago Cubs. I told her my favorite place in the world were the right field bleachers at Wrigley. Talking about baseball was second nature to me because, after all, I’m a man, and that’s just what we do.

I pretended that night to adore baseball because I adored him.

Oh, no. You pretended!

My first love poem for her came to me while I was having a root canal at the dentist’s on 35th Street in Miami. As I sat in the chair I watched tiny pieces of ground-up tooth spray into the air. The Carpenters sang Close to You. I felt a fizzy softness inside. My heart swayed between happy dreams of romance and the abject terror of screwing it up. I’m in Love and I’m Having a Root Canal, I titled the poem.

After our first evening date, at a monster exhibit at a museum in Miami where I read my poetry, we dated for nine months and then got engaged. In October of 1996, one year after we’d met, we married at Seaside, surrounded by family and our best friends from school and a famous writer or two who’d stumbled in from the conference. Somehow, it’s 22 years later.

I’ve loved her every day for all that time.

I have loved him every day for all that time.

I don’t think we’ve ever had a serious, drag-down sort of fight. I’ve heard we’re supposed to, that it’s healthy, but we really haven’t. I think it’s because, along with the initial burst of romantic love, there was the beginning of a genuine friendship. Lyn is my best and truest friend.

Jesse is my best and truest friend.

I defer in all true things to Rumi, who writes:

The minute I heard my first love story

I started looking for you, not knowing

how blind that was.

They’re in each other all along.