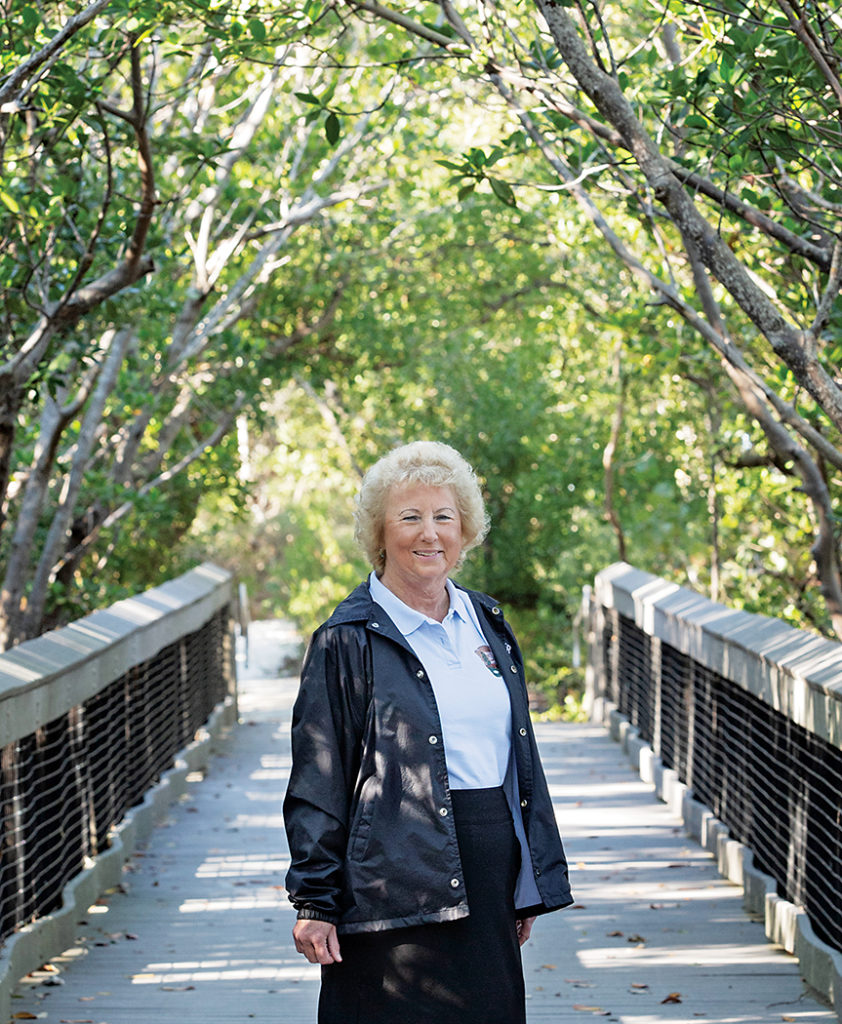 When Fran Mainella took the helm of Florida State Parks in 1989, she was invited to visit Fakahatchee Strand Preserve State Park east of Naples.

Wearing sneakers rather than boots, she allowed staff to lead her on a Clyde Butcher-style swamp walk through dark, chest-deep water. She was told submerged cypress knees might be gators; overhead branches might be snakes.

“It was a test,’’ she says with a chuckle, “and I passed with flying colors.’’

Indeed. She went on to lead the National Park Service in 2001, making her the first lady of the great outdoors. The landscape of the nation’s recreation culture is dotted with her name, gracing awards and nonprofit and corporate board memberships.

Nature plays a big role in Southwest Florida’s quality of life, and Mainella was in charge of our state’s biggest parks for nearly 12 years and our nation’s biggest for more than five. Even now in retirement in Bonita Springs, she continues helping local grassroots projects and national efforts for parks preservation, education and healthy recreation. She is in demand for parks and leadership seminars around the world. She co-chairs the U.S. Play Coalition.

Yes, Mainella, who whips around town in a Mustang convertible as white as her hair, is still blazing trails at age 71—truly a force of nature.

Mainella’s first treks into nature came in early childhood, with her family. They ventured to parks in Carlsbad, New Mexico; the Adirondacks; Old Man in the Mountain in New Hampshire.

Mainella can attribute her love of the outdoors to her father, a blue-collar Connecticut pharmaceuticals plant worker who grew up as a cowboy in New Mexico. Her Type A personality comes from him, too. The ready smile and commanding voice, though, are all her own. 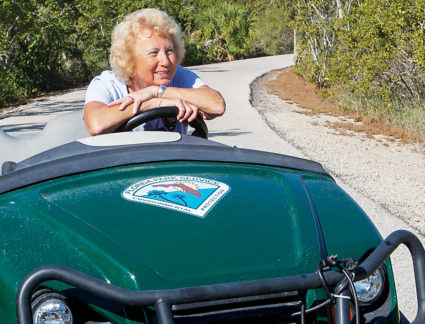 She started out as a teacher and playground counselor before leaving her native Connecticut for Tallahassee, where her first husband, now deceased, got his break in TV news in 1977. There, she found an affirmative action job at a community center in a minority neighborhood. From there she stepped up to be parks and recreation director in the east coast city of Lake Park in 1978, and then to be director of the statewide parks and recreation association in 1983, which wired her into circles of statewide government officials.

Her big break came in 1989 from Gov. Bob Martinez, when he appointed her to head the Florida State Parks. During her leadership, the state’s park system earned its first of three “Best in the U.S.” National Gold Medal Awards, under Gov. Jeb Bush. The achievement set quite the precendent—no other state system has received the award even twice.

Still wanting more, though, Mainella went from one Bush brother to another to become the first woman director of the National Park System—at a fateful time.

Mainella was nominated in May 2001 by President George W. Bush at a ceremony at Everglades National Park. She was confirmed by the Senate in July. Only two months later, she would be thrust into a baptism of fire: the terrorist attacks of Sept. 11.

Those who witness Mainella in action see she often showcases “three C’s”—courage, communication and connections. And never were those three C’s tested more than in the wake of Sept. 11.

First, the courage. Mainella now was tasked with creating backpack and car bomb security at national parks. Motion-detecting laser beams, she says, were planted on the backs of the iconic busts at Mount Rushmore. She helped supervise heightened safety at the White House grounds and the iconic memorials to Lincoln, Jefferson, Washington and others—parts of the vast parks empire that encompasses highways, museums, the Statue of Liberty and Alcatraz.

She drove to work each morning with gas masks and extra clothes in the trunk. “I never thought I would have an explosives expert on my staff,’’ she says.

Communication—the second C—with far-flung staff was crucial. She had lots of practice in Florida getting park managers and concession vendors to work together, share data, plan, keep admission affordable and forge “a seamless system of parks.’’

And connections? She had leveraged years of contacts and relationships to get to lead the park service, and she needed them all to deal with another newcomer, Homeland Security—as well as Congress, the White House and the press—to stabilize 60 parks in 28 states with 80 million visitors per year.

“Our parks are the soul of our nation,” Mainella says of the lands she sought to protect. “They tell the story of America—from Gettysburg and Fort Sumter to the geology of the Grand Canyon and volcanoes in Hawaii and redwoods of California.’’

Mainella developed a love for Southwest Florida—its beauty, towns, weather—while working on the development of Lovers Key State Park in Bonita, including the hugely popular dog beach managed by Lee County just to the south.

Ray Judah, the conservation-minded former Lee County commissioner, worked with Mainella on establishing the dog beach. “Fran was a terrific ambassador for our U.S. and state parks systems,” he says. “Always available for public speaking engagements, knowledgeable, and with a tremendous and bubbly personality and demeanor as the chief steward of the public’s natural resources.’’ 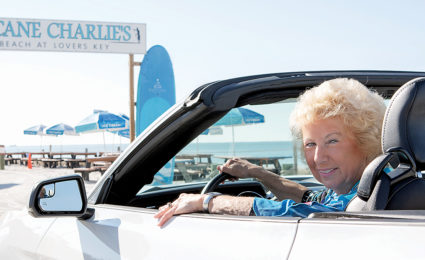 Mainella now offers guidance to the Friends of Lovers Key for the exciting prospect of an educational visitors center, befitting the state’s second-most-visited park. Park users will be able to learn about the wildlife and various ecosystems at Lovers Key, which Mainella helped mold in 1996 from a former county park and property earmarked for condominiums—some 1,600 acres in all. Not to mention, visitors can enjoy the inherently therapeutic quality Mainella enjoys so much about a park.

“It could be,’’ she says of the center, “the place to gather to support nature.’’

That special connection with Lee County led her to recommend Bonita to her parents when they retired. They chose Citrus Park, the senior enclave famous for its winter softball teams. Her sister chose Naples.

Mainella also works locally with the South Florida National Parks Trust, to help raise public awareness of Everglades National Park and Big Cypress National Preserve, where she still leads tours for Naples-based Trendy Tours. When someone comes to visit a park, she says, that park gains a friend for life—a friend who can insist on adequate funding and vote against harm from development or energy exploration.

She shines a light behind the scenes: Parks, national parks especially, serve as a barometer of the environment by virtue of research by on-site scientists monitoring conditions of water, air, soil, plants and animals. “If something bad is happening in a park, which gets special care,’’ she says, “it can be really bad outside the perimeter.’’

“I always want to help,’’ Mainella says. “I want to make sure the parks are taken care of.’’

Franklin Adams of Naples, a 30-year board member of the Florida Wildlife Federation, describes Mainella as “a common-sense lady with a love for nature.’’

Manley Fuller, president of the federation, calls Mainella “one of the most dedicated and thoughtful public officials I have known.’’

Pamela Jones-Morton, a volunteer at Lovers Key State Park and now Koreshan State Park, calls her “nothing short of amazing,” saying, “She always wants to know what is next and how she can help.’’

Mainella’s greatest help extended these days comes via her co-chair position with the U.S. Play Coalition. Based at Clemson University, where she has taught in a prestigious recreation training and management program since 2006 and won faculty awards, the coalition that she helped to found brings together experts in fields as diverse as medicine, psychology, education and architecture. Together they design and encourage the fun and healthy activities of tomorrow.

Mainella, who now plays golf at her home community of Hunters Ridge, cites “a crisis of play and nature deprivation,’’ starting with obesity rates in children. The culprit, she says, was schools stressing high grades to the point of eliminating recess. Play and even visits to parks grew to be seen as wastes of time.

Now she fights back, charting a course between organized play, such as golf and tennis, and obsessive, solitary video gaming. She champions a data-based approach, showing unstructured play—as basic as dog walking, hiking, enjoying movies with friends or spotting patterns in clouds—as a booster of quality of life and a reliever of stress.

Her ongoing mission took her to Baltimore in September for a convention of municipal parks officials, and to Washington, D.C., in October for an AARP panel on the health benefits of play and travel.

“We are trying to remind everyone,” she says, “that play is so much a part of our lives—if we let it take place. And it includes so much of what makes us happy.”