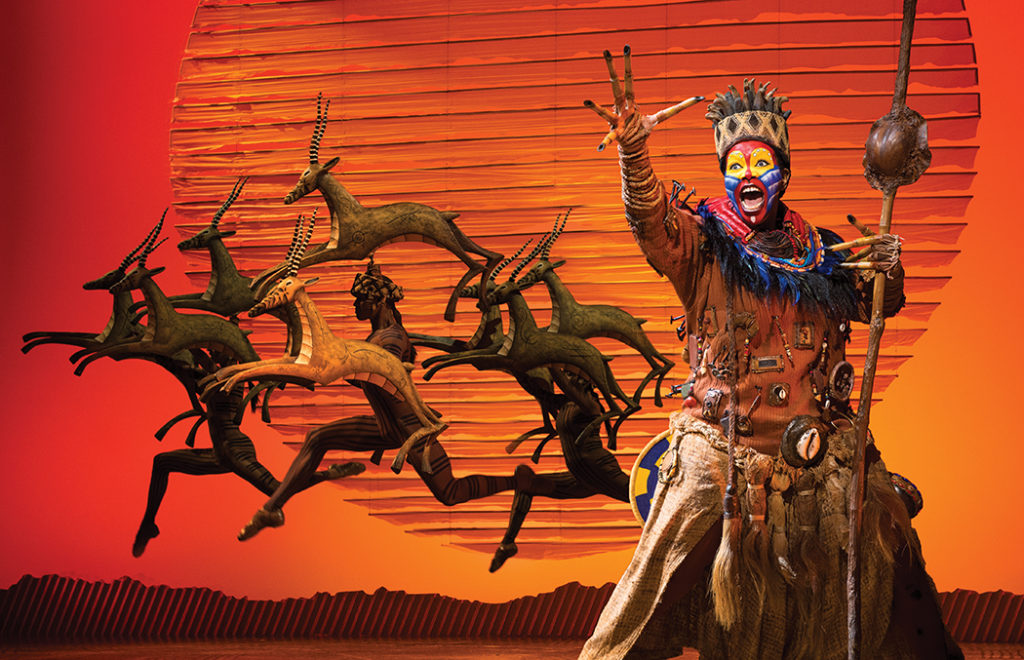 When Disney’s The Lion King lands at Barbara B. Mann Performing Arts Hall at FSW this month, know that its famous “hakuna matata” (or “no worries”) philosophy belies the work that goes on behind the scenes. A highly skilled team of professionals coordinates to bring the unparalleled production to life—including its 200 puppets and elaborate costumes.

“I work very closely with both (the dance and stage direction departments) to train our performers on the puppets,” Puppet Supervisor Michael Reilly says. “Lion King doesn’t hire puppeteers; instead, we hire dancers, singers and actors and train them. The puppets in the show are quite large in some cases, and that forces us to think out of the box in terms of design.”

Perhaps most literally outside-the-box are the iconic giraffes, which pose challenges while touring. “The giraffes are four separate stilts and a head, and they are stored on a dolly that travels in the truck from city to city. We tend not to have too much time to set up the show, so this is essential,” Reilly says. However, he adds, “We keep finding new ways for the puppets to break, so that keeps it fresh for me, as I need to find interesting ways to fix them!”

Costuming that utilizes 2,951 yards of fabric also takes preparation. Wardrobe Supervisor Gregory Young explains: “The show and costume changes were set during the rehearsal process. It depends on the theater where all of the changes are set. It’s our job to find locations in the theater where quick changes will happen.”

“After working on The Lion King for close to 20 years,” he adds, “it still brings me joy when speaking with a patron after the show and hearing their excitement of how much they enjoyed the show and costumes. This makes the hard work well worth it and satisfying.”
Reilly agrees. “This show has been around for over 20 years for a reason. Its appeal and message are universal.” Witness it April 3-21. bbmannpah.com

FGCU IMPORTS THE MASTERS
As it continues to shape young minds, Florida Gulf Coast University also continues to expand its reputation as home to a thriving cultural community. One piece to that puzzle? The Bower School of Music & the Arts’ annual Nisita Concert Series, featuring ticketed concerts by regional, national and international musicians. The series’ April 5 concert brings in the renowned Manhattan Piano Trio.

This award-winning trio is known worldwide as a New York-based leader in chamber music. And their visit will serve a purpose beyond thrilling the audience. As Michael Baron, the school’s Myra and Van Williams Distinguished Professor of Music and a decorated pianist, explains, “We also take our duties seriously to enhance our students’ learning outcomes by providing them direct contact with musicians as a model of performance and teaching. The Manhattan Piano Trio is an example of this exceptional talent. Our students hope to emulate these wonderful artists, and the musicians also offer master classes. We are proud to provide this service to the Southwest Florida community.”

BEETHOVEN AND YOGA
Typically, we picture a crowd leaping to its feet in applause within the context of a ball field. But a recent performance by Southwest Florida Symphony of Beethoven’s Symphony No. 5 drew the same avidly appreciative response. It was seen as radical when first performed. Music Director Nir Kabaretti explains, “This piece was revolutionary at the time. He used rhythm to shape the theme and expanded the range of the symphony.”

Southwest Florida Symphony is likewise on a mission to expand its range. As it celebrates its 58th year, it showcases a repertoire of timeless classics, of course, but also innovative collaborations. This season features the likes of Neil Diamond and Coldplay amid Verdi and Beethoven.

April, for example, showcases both Mozart and movement. Along with Wolfgang concertos, the orchestra will present “Symphonic Salutations Yoga,” in which participants can practice yoga to live music.

But no matter the performance, “It’s important to bring 100 percent of your talent to the piece,” guest cello soloist Thomas Mesa says. “You never know what part is going to touch someone.”