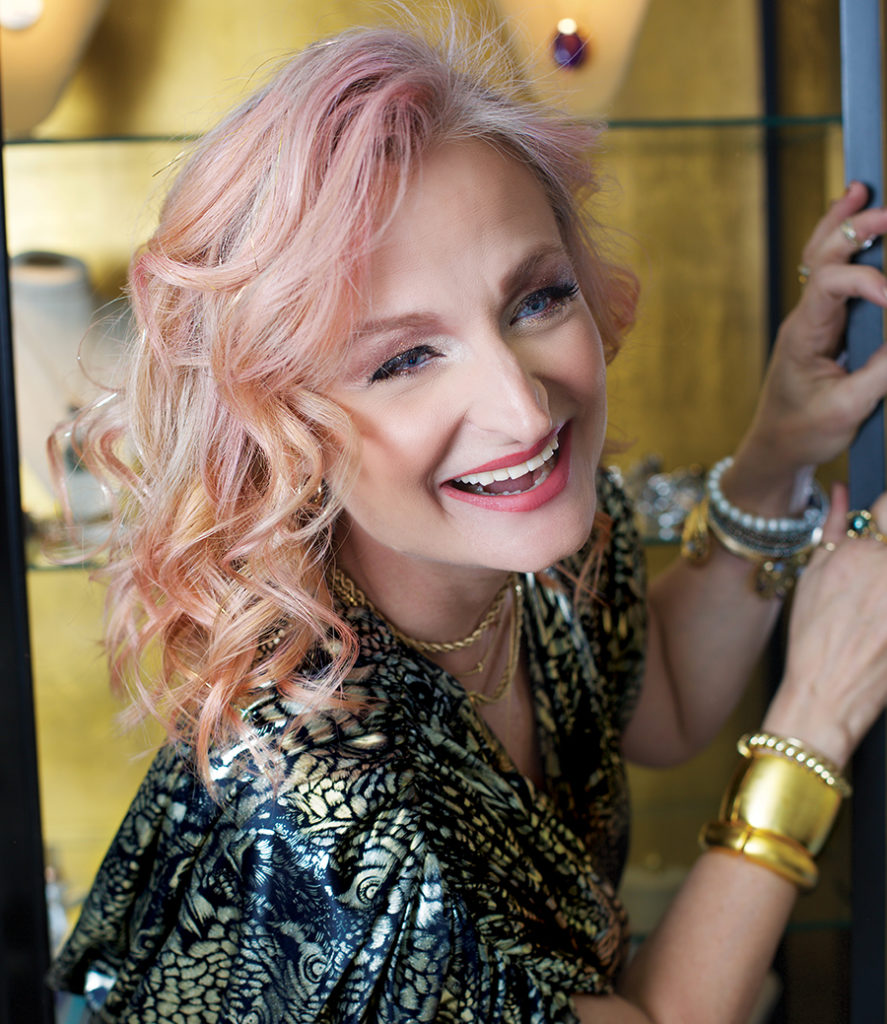 Look closely. Jewelry designer Amanda Jaron’s hair is pink. Here and there are strands of tinsel. She’s wearing about a dozen gold rings. Her cropped blazer is shiny gold, but muted.

She’s one foot in the direction of outrageous. Not pushing the envelope, just nudging it. She’s a cotton candy martini at a margarita party.

She is the concept of calculated risk elevated to a brand, in her appearance, her work and certainly in her investments—most notably her studio in the burgeoning Bayshore Arts District, a phoenix in a formerly hardscrabble habitat in east Naples.

“She’s my creative friend,” says Sonya Sawyer, a CFO, ballroom dancer and like-minded philanthropic Neapolitan. “She’s a little out there. And her laugh. You know she’s in the room when you hear her laugh.

“You always need that one friend that can get away with things, that is spontaneous and creative and unique. But she’s so easygoing, one of those types who can talk to anyone,” Sawyer says. 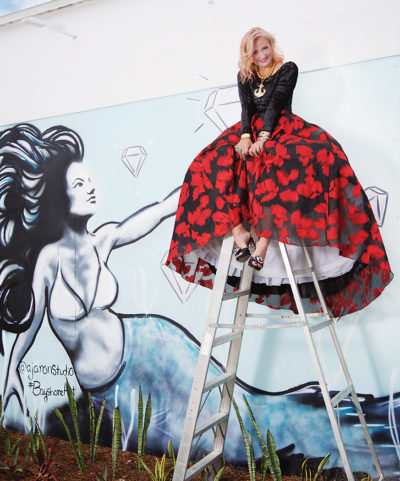 Jaron’s daughter, Alana, agrees. “I notice everyone when they come to the studio and talk to her, they feel like they’re in a space where they can talk. She has great energy.”

And her audience has been wide. For a few years, she appeared on camera on the Home Shopping Network marketing her jewelry line with a host.

Her designs have been worn by celebrities from Sharon Stone, Kathy Ireland and Amy Brenneman to the Real Housewives of New Jersey. Her creations have sparkled plenty from the pages of Oprah’s magazine to the catalogs of Avon. She’s a fan of diamonds and pearls and gold, big faceted stones and shiny candy-colored bracelets.

“She’s happy,” adds Alana, a 15-year-old freshman at Naples High School, who has a twin brother, Willem. “All my friends just think it’s amazing that my mom is an artist and she does something creative and fun and she doesn’t do paperwork in an office.”

Jaron seems to spread traces of that attitude everywhere, like a bit of glitter on the carpet after a special young one has finished a project.

At 47, Jaron has the aura of a cherished young one herself, one cute enough to get away with detonating a few F-bombs, even in polite company. “Glitter” isn’t a word she shies from either. Several years ago, she started the Glitter Foundation and began holding annual fundraisers. With the proceeds, she gives one grant to another community nonprofit and one to her community outreach project, which she calls Glitter in the City. Held in July, the project involves the kids in Collier County Parks & Recreation summer camp. One year they decorated paper feathers, which Jaron combined to make pairs of giant butterfly wings. The kids—and the women of the Naples Newcomers Club, with whom Jaron partnered for the project—then each stood in front of the wings to become the body of a butterfly for a photo.

She frequently donates her creations to charity auctions and is particularly devoted to PACE Center for Girls, which receives a portion of sales from two ring designs a year, one at $99 and one at $199. Jaron has co-chaired the Love That Dress fundraiser for PACE twice and supported it much longer. She has taught jewelry classes to the girls and held benefit parties, as well.

No doubt it’s efforts like these that led the United Arts Council of Collier County to choose Jaron as one of five Stars in the Arts honorees for 2019. As of press time, a gala scheduled for March 9 was set to celebrate her “significant contribution to arts and culture in Collier County.”

Surely that includes her work to promote the Bayshore Arts District, where Jaron and her husband bought a house in October 2015. Before that, they lived in Golden Gate Estates, where they planned to build a studio and “have fancy chickens,” Jaron says. “But neither happened.” Instead, she had a studio in North Naples across from Waterside Shops.

The Bayshore District began to intrigue people when retiree Rebecca Maddox conceived of a less conventional Naples. She started with the purchase of a sad-sack building that now cutely houses Three60 Market. It’s on Haldeman Creek, which runs between Three60 and Maddox’s and architect David Corban’s new food truck hot spot Celebration Park.

“I can kayak from my backyard,” says Jaron, waiting for takeout lunch there one afternoon in January. “I live just around the bend,” she says, pointing.

Indeed, the area once around the bend and over the proverbial tracks has been undergoing a rebranding of its own, and Jaron has helped.

When the reimagining of the Bayshore Arts District had been underway for a couple of years and still didn’t have a home on the web, Jaron created a Facebook page. That was about three years ago. “And I have had fun pushing that excitement,” she says.

“My vision for this area is for it to stay eclectic and authentic … not turn it into another preplanned community. That’s why we don’t go out with a capital campaign.”

Jaron moved her studio from North Naples to Bayshore Drive about a year and a half ago. “This was a sh***y warehouse and all around were homeless people,” she says. She and her husband renovated and promoted and turned it into a chic boutique with an accompanying gravel lot.

“The very first person to walk in here said, ‘I feel like I’m in Soho!’

“I didn’t realize I was doing that,” she says. 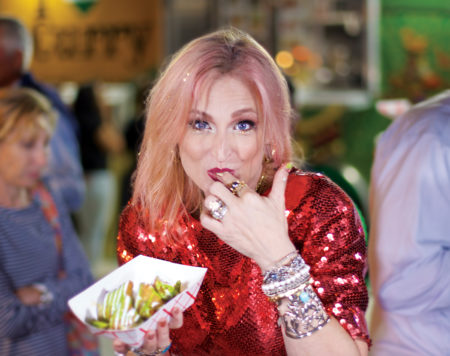 Jaron graduated from Philadelphia University of the Arts with a degree in metalsmithing. She had grown up in Clearwater; her father was in medical sales, but at heart he was a writer, she says. He graduated from Rutgers, having met and married her mother, a jazz dancer in an off-Broadway show, while he was a student.

With a metalsmithing degree, she says, “the only place really to go was New York,” where she landed a job as an assistant jewelry designer for Givenchy.

“I thought I was Sarah Jessica Parker in New York. Sex and the City was on then, and I had the job of my dreams.”

But along came 9/11. At that point married to Stephen, who worked for General Electric, Jaron commuted by train from New Jersey. She was on her way to work in Manhattan that morning. Her train was on its aboveground track when American Airlines Flight 11 crashed into the North Tower of the World Trade Center. She saw the smoke just before the train continued its route on an underground track.

New York lost a bit of luster that morning as Jaron took the last train out of the city.

A couple of years later, her father fell ill in Clearwater and the couple—by then parents—heard Florida’s siren song.

But you can’t take New York out of the jewelry designer.

“Some days it’s like Grand Central in here,” she says, back in the studio with her food truck takeout of vegan curry. “Some days I don’t see a soul. But here, I know people who come in here want to be here.”

The school bus stops between the Jarons’ home and Amanda’s studio, so it’s not unusual for her children to drop by. The family’s fluffy white shih tzu and Maltese mix named Pearl, a Humane Society rescue, usually is there, too. On the day we meet, Pearl’s fur is dyed pink in spots, a special touch by the groomer. Jaron addresses “Miss Pearl Bug” directly: “Yes, there’s an old lady out there for you and you got stuck with me!”

In this studio space, where a mermaid mural adorns the side of the building, Jaron has since October 2018 held occasional events she calls “Music Under the Mermaid.”

At a networking event one January evening benefiting Child Care Resources of Collier County, it was clear the Bayshore Arts District still was relatively new to some attendees, including Business Development Manager Russell Burland of the Hilton Naples. He said he had been to the food truck park before and had driven by Jaron’s studio and seen the “graffiti.” Graffiti?

“Let’s call it art,” he said, smiling. “This change, what’s happening down here, is wonderful.”

What’s happening at A. Jaron on those evenings is music, light food, networking and a bit of jewelry buying, of course. Jaron is a smart marketer, drawing new groups of people to the area and her studio. Some are familiar with her work, some not.

“I get asked, ‘Is your jewelry cheaper than Saks? Tiffany’s?’ In some cases, yes. In some cases, no,” Jaron says. “My customer is the person who has everything from Saks, Tiffany’s, and there’s nothing else to buy. They’re looking for something custom.”

Her signature service is what she calls the “blingover”—one piece or several that the owner, often one of her “Naples ladies,” brings in for a kind of jewelry reincarnation.

First, customer and artist meet for a bit of storytelling over the pieces that will be taken apart, melted down, molded, reset, remade. Although she can do all the processes herself, Jaron prefers to concentrate on the design work and hires specialists in the casting, stone-setting and other processes.

Shannon Morgan of Prestige Insurance lost her father and mother within a short time recently. She had their wedding bands. “I wanted to do something meaningful and I didn’t know what,” she says.

She came to Jaron’s studio and they talked. Jaron sketched. In just a few days, Morgan’s parents’ matching gold bands became a heart within a circle on a chain with round gold balls. That was in April 2018, and in January, Morgan turned tearful when talking about it.

Jaron began her professional life in a very corporate world in midtown Manhattan, but she often escaped to the boutiques in SoHo. In a personal blingover, she traded many “beautiful shoes” for pink glitter Chuck Taylors and a casually chic wardrobe, complete with gold glittery cat-eye glasses.

“She’s definitely out of the norm for Naples,” says her friend Sonya Sawyer.

But it works. And by now, the calculated risk is old hat—or, well, tiara.

Imagine a corporate boardroom in New York, circa 2003: Jaron, the senior jewelry designer for Avon, is the youngest person in the room. She is making a presentation, and she has dyed a purple streak in her hair. She has worked with this company long enough to earn respect. Serious faces meet her gaze, but it goes well.

One executive, a woman, raises a hand, points to Jaron and says, “Like the hair.”