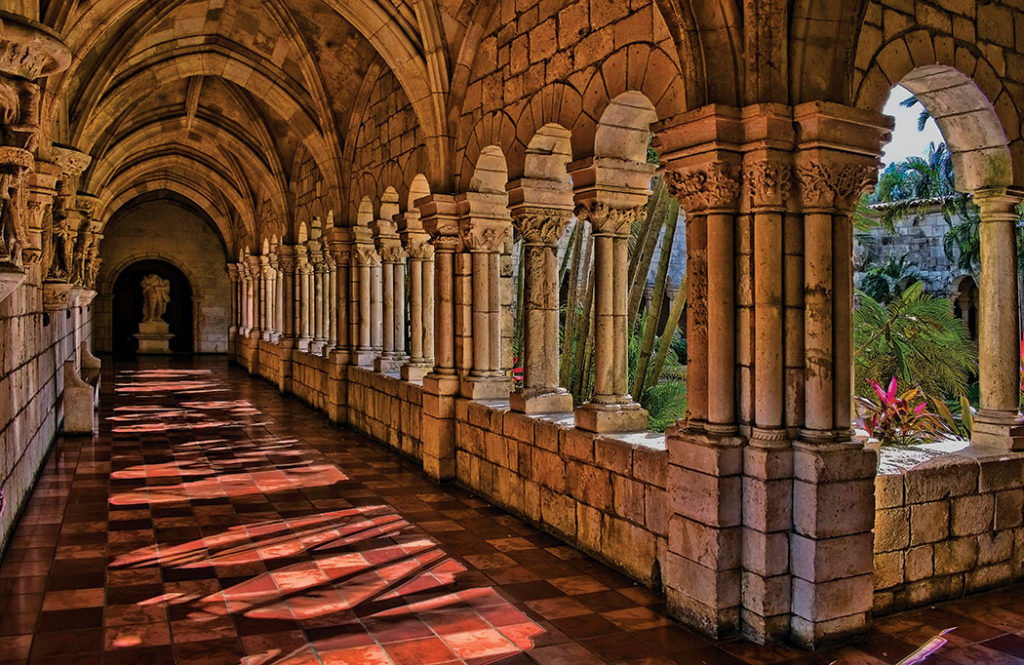 Though I revel in adventure, it’s possible to have too much of a good thing. After a series of nerve-wracking road trips—hand-feeding alligators, scuba diving in freshwater caverns—I was ready to check out a quieter spot in this state. So, logically, I headed to Miami.

OK, not the Miami most people know, but a lesser-known corner of North Miami Beach where I discovered what is, quite possibly, the most tranquil spot in Florida: a 12th-century monastery. Wait. Twelfth century? But wasn’t St. Augustine founded in 1565, and isn’t it considered to be the oldest city in the United States? Yes, both true. So, this 12th-century monastery in North Miami Beach…?

Construction on the monastery and cloisters of St. Bernard de Clairvaux began in 1133 and was completed in 1141. In Sacramenia, northern Spain. Not Miami. Cistercian monks inhabited the monastery for the next 700 years, but a social revolution in the 1830s brought an end to their tenancy when the cloisters were seized and converted into stables.

They remained that way for most of the next century, until 1925, when newspaper baron William Randolph Hearst purchased the cloisters and the monastery’s outbuildings. Hearst had the structures disassembled, and each individual stone was packed in hay and placed in a numbered box before being shipped to the United States. In a stroke of bad fortune, hoof and mouth disease broke out in northern Spain at the same time, and when the crates arrived in America the U.S. Department of Agriculture quarantined the shipment. To prevent the disease from entering the United States, agents broke open the boxes and burned the hay surrounding the stones. When they were finished, they neglected to put the stones back in their original numbered boxes. 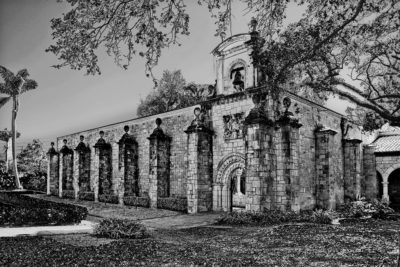 A second blow of bad luck struck: Hearst suffered a series of financial setbacks, and he couldn’t afford to complete the project. The stones remained in a warehouse in New York City for the next 26 years. Hearst died in 1951, and in 1952 the disassembled cloisters were sold to two businessmen from Ohio who thought to create a tourist attraction in Miami. The pair spent more than a million dollars to have the structure rebuilt, a project that took 19 months and was dubbed “the world’s biggest jigsaw puzzle.”

The newly rebuilt monastery lasted in its new incarnation as a tourist spot for less than a decade before money troubles forced the Ohio businessmen to sell the buildings. They were bought by wealthy philanthropist and church benefactor Col. Robert Pentland Jr., who donated them to the Episcopal Diocese of Southeast Florida. Today the monastery is operated as an active Episcopal church with regular Sunday services. It’s also open to the public for visits, weddings, quinceañeras and photo shoots. Which is how I found myself there.

The minute I stepped onto the grounds, I felt the familiar quietude of holy places. Though I’m not particularly religious, I enjoy visiting sacred sites—cathedrals in France, temples in Japan, neolithic worship spots in Ireland. They all have a similar quality, I think, a peace that comes from deep devotion. Miami’s Spanish monastery was no different. Though I could hear the occasional drone of small planes passing overhead, the area inside the walls was empty and still. The space felt like South Florida—the temperature, the humidity, the rows of ixora bushes and potted plumbago, the clumps of ferns and stands of live oaks, the bromeliads and hibiscus—yet it felt different, other. Older.

I stood perfectly still, and I could smell the black earth, hear the running of a hidden fountain, feel the sun as it filtered down through the palm fronds. A leaf dropped to the Spanish tile, and the sound was loud enough to make me jump. The heavy wooden doors to the cloisters were flung open to the day, and the sun lit up the stone arches of the colonnade. Where they came from, these stones would never have known days like this.

By the time I’d had my fill of the monastery’s peaceful serenity, two women walked in, chatting loudly, their high heels clicking against the tile floor. They stopped to pose for selfies along the walkway. A horn honked nearby, and the jangling notes of bachata music cranked up across the street. But I didn’t mind. I was ready for the next adventure.

The Ancient Spanish Monastery is open every day from 10 a.m. to 4 p.m. Entrance is $10 for adults, $5 for students and seniors. Though the website is supposed to include an updated list of activities and closings at the church, it’s not always accurate. Call ahead before you make the drive. 16711 West Dixie Highway, North Miami Beach; (305) 945-1461; spanishmonastery.com