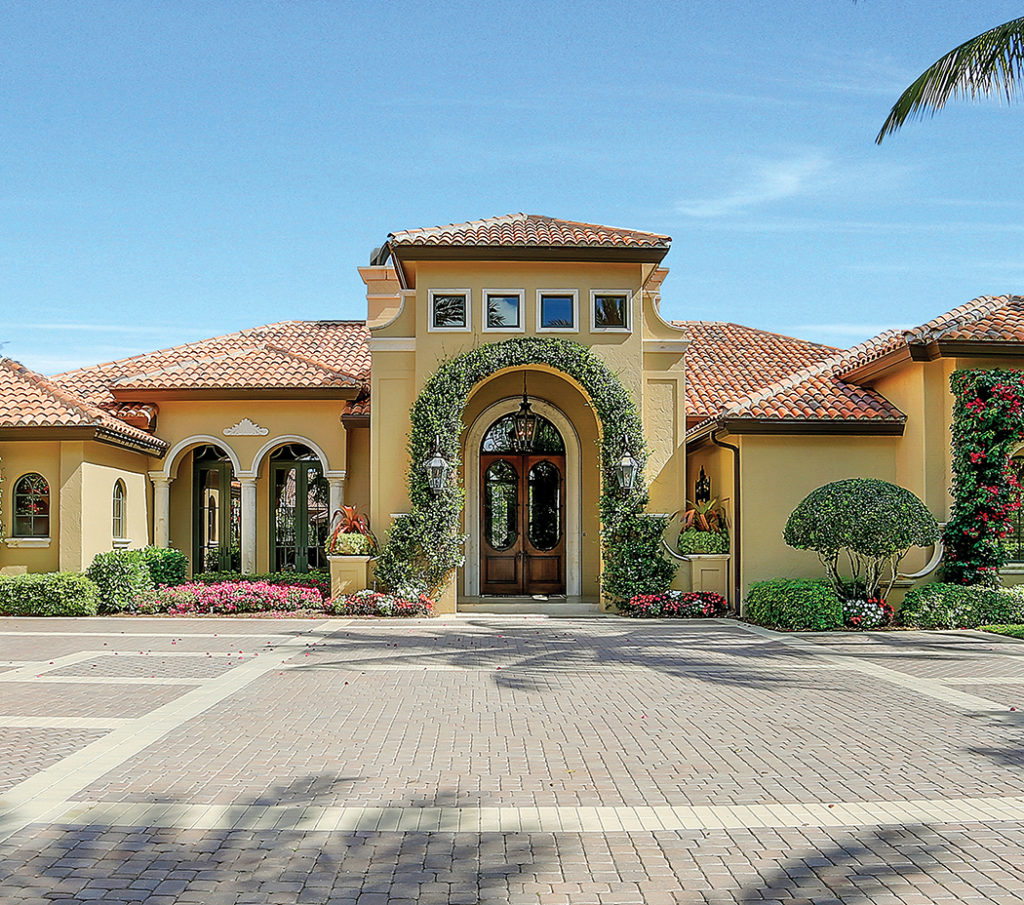 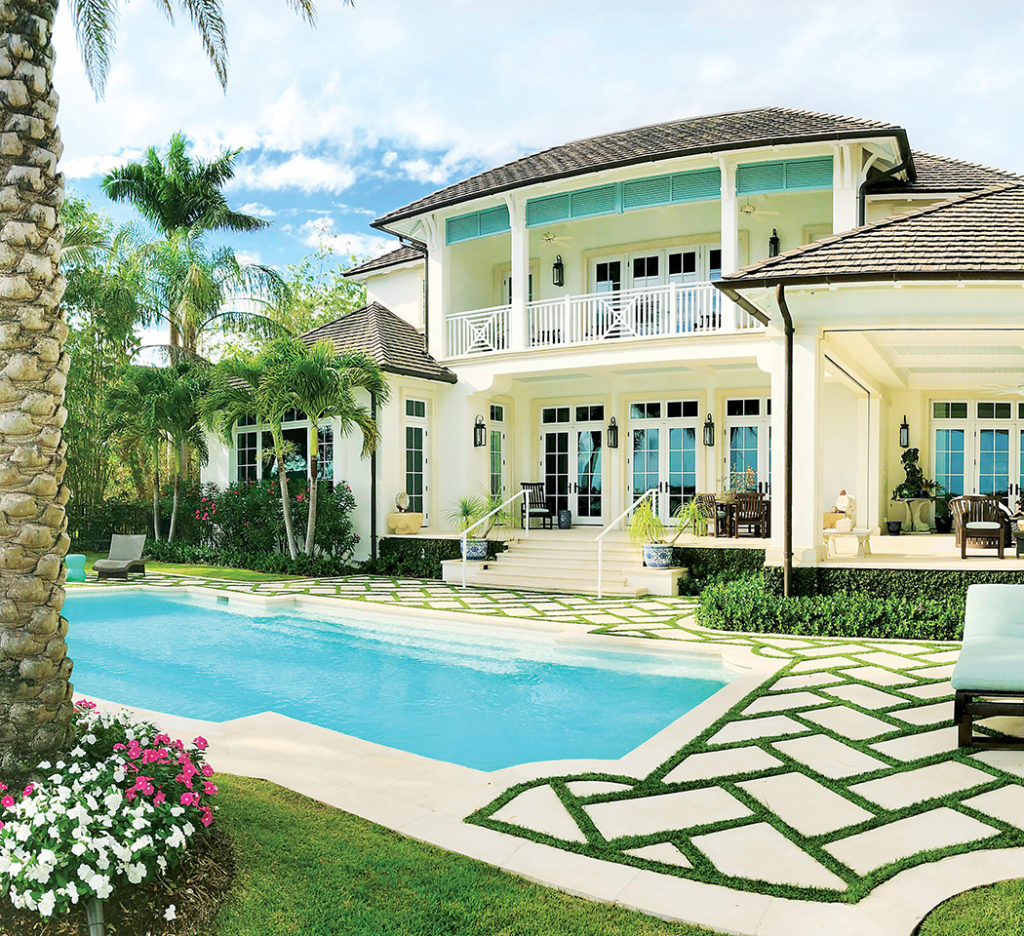 Buyers already living seasonally in Naples asked their real estate agents, Cynthia Joannou and Carl Dittrich of Barefoot Beach Properties, to find them a luxury home with the best view available. They found it in 720 Admiralty Parade, located in the plushy Naples neighborhood of Port Royal. “The view is unbelievable,” Joannou says. “You look straight south to Keewaydin Island, and to the west you see Gordon Pass. When the sun sets, it’s gorgeous.” Designed by Stofft Cooney Architects and built in 2014 by Kurtz Home Naples, the mansion—sold in December—sits on nearly half an acre and boasts 9,658 total square feet, including the landscaped outdoor living area, with its multiple seating options and waterfront pool. The 7,730-square-foot interior contains five bedrooms, a den, an office and eight bathrooms total, plus an expansive second-floor balcony from which to enjoy unobstructed views. “The property itself is just stunning,” Joannou says. With direct, bridgeless access to the Gulf of Mexico and the opportunity to join the private Port Royal Club, the new owners may never want to leave their top-dollar dwelling.

“There’s a buyer for every home out there,” William Raveis Florida Broker Associate Michael Pagliccia says, and an Italian buyer from New York felt right at home in the 15159 Brolio Lane estate that Pagliccia listed, swiping it off the market for $4.2 million last December. The 6,000-square-foot Venetian-style Naples residence bursts with detail, from its fine woodwork and elaborate ceiling treatments to its imported marble and award-winning kitchen renovation by BCB Homes. The previous owner even broadened the lanai, removing some greenery and adding a fountain and fire bowls around an LED-lit pool with a lake view. “At night, it was just a showstopper,” Pagliccia says of the space. Situated on more than half an acre, the four-bedroom, six-bathroom abode also features a den and furnishings by Collins & DuPont. The new buyers can opt for membership to The Club at Mediterra, which has two 18-hole golf courses, a private beach, dining opportunities, tennis courts and more. 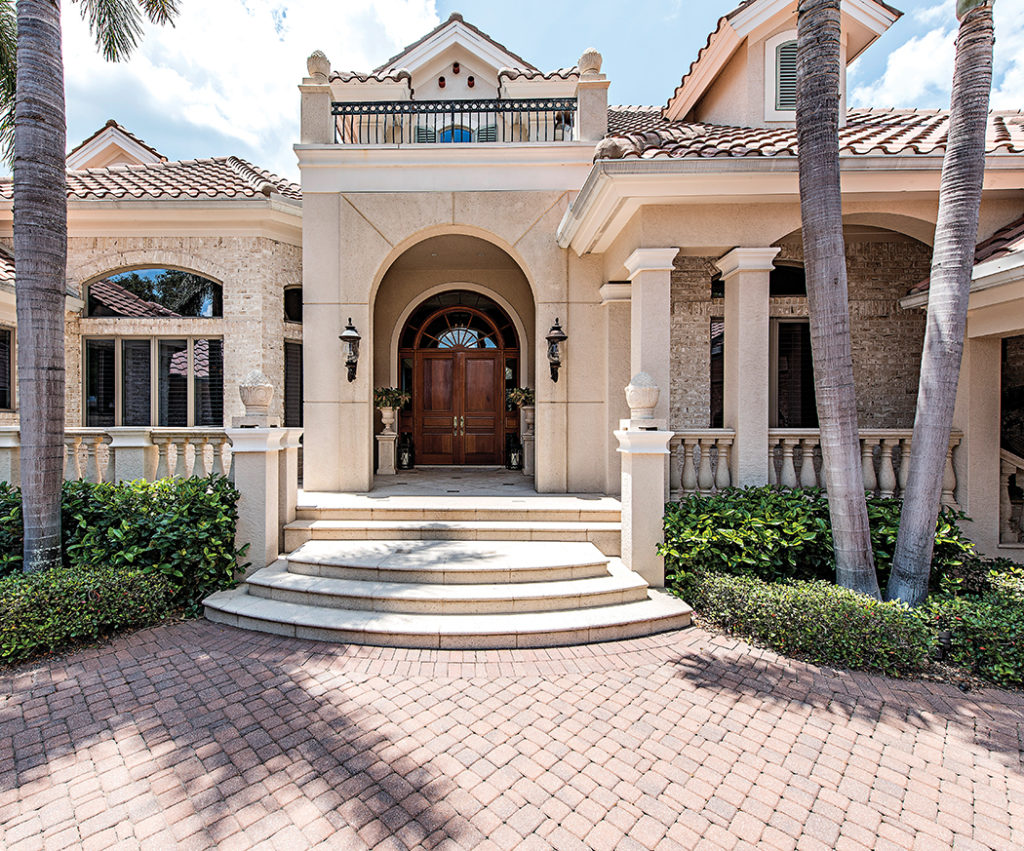 A couple already living in Southwest Florida part-time left the high-rise lifestyle in December for the home at 26220 Woodlyn Drive in Bay Woods of Bonita Bay. “You could not build this home for $3 million today due to the detail,” says Cinda Carron, who co-listed the property with Ginger Lickley, both of John R Wood Properties. Built in 2001 by Harwick Homes, the 5,085-square-foot interior features crown moldings, high ceilings, 10-foot pocketing glass doors, marble floors, a chef’s kitchen and more. Out back, lush landscaping surrounds the screened-in pool and spa area, where the buyers can lounge by the fireplace or enjoy a fresh-cooked meal from the outdoor kitchen while watching the sunset. Located on more than half an acre with lake and golf course views, the compound contains three bedrooms, a den, four full bathrooms and one half-bathroom. “[The property] is big without being cavernous,” Carron says. “It’s homey. It really is a great house.”