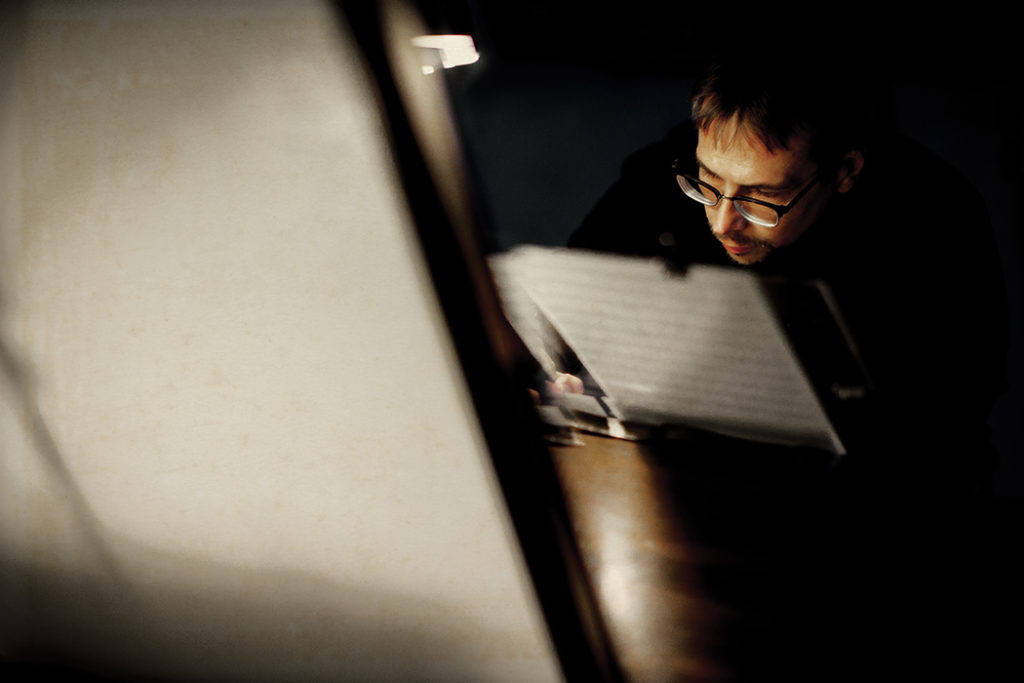 Of the Myers-Briggs personality types, there is one that’s nicknamed “The Composer.” It’s someone who is energized by time spent alone and has an innate knack for creating aesthetically pleasing experiences. The only drama this type of person would engage in, it would seem, is writing a stirring crescendo or creating a stunning chord. The description fits Jason Bahr pretty well. With braces and light facial stubble, he looks much younger than his 46 years. He’s a friendly, cerebral guy, who spends most of his time composing his own work or teaching at Florida Gulf Coast University, where he is an assistant professor of music and composition.

But there was that one Sunday morning in the spring of 2017 when paramedics took him out of the First Presbyterian Church of Bonita Springs, mid-performance. “It was very dramatic and didn’t need to be,” he says later, sitting at the kitchen island in his Fort Myers home, laughing. A water dispenser for his cats, Ray and Cho-cho, bubbles nearby. He lives here with his wife, Rebecca, who’s nearly completed her doctorate in pharmacy. 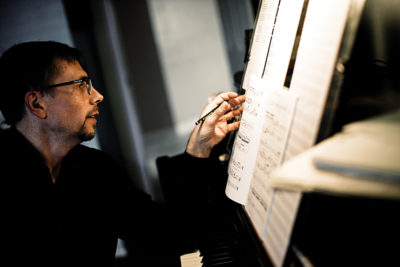 In March of 2017, Bahr was working feverishly to finish a symphony he was writing—his second. It was set to premiere in April of that year. Just 44 then and healthy, he’d never paid his health much mind. But as he worked away on this long and complicated piece, he knew something wasn’t right. He just felt terrible, for one, and he, always naturally thin, was gaining weight at an alarming rate. He ignored the symptoms and kept working until he just couldn’t ignore them anymore and went to see his doctor. The doctor sent him straight to the cardiologist, who shocked him with this line: “It’s unbelievable that you’re alive.”

It turned out that there was no wall between the upper chambers of Bahr’s heart (the atria), meaning that he essentially had three chambers rather than the usual four. This meant that deoxygenated blood was coming back from circulation and mixing with the freshly oxygenated blood in his heart. The filtering system that works so beautifully in most of us was not working for him. More critically, he was at risk for blood clots that can form in the atrium and go out into the bloodstream to cause a stroke. What he had is called an atrial septal defect. Not only are these rare, but the one Bahr had, at 4.5 centimeters, was about twice the size of the largest ones noted in the medical literature. Ironically for a composer, this defect interfered with the rhythm of the heart.

His doctors implored him to have surgery right away. But he had this premiere coming up. A symphony! He pushed the surgery off. And he made it all the way to the dress rehearsal of the work on a Saturday—the night before the premiere. All went well. On Sunday morning, he sang his part in church as usual, as the bass section leader. But again, he knew something wasn’t right.

“I could feel that my heart had gone into an irregular rhythm,” he says. “On the last hymn of the first service that morning, my heart syncopated [went off rhythm] and I fainted.” He hit his head. Someone called an ambulance. And that’s when the ambulance arrived, and the paramedics spirited him down the aisle. So much for no drama. “I watched the premiere on Facebook Live from my hospital bed,” he says. 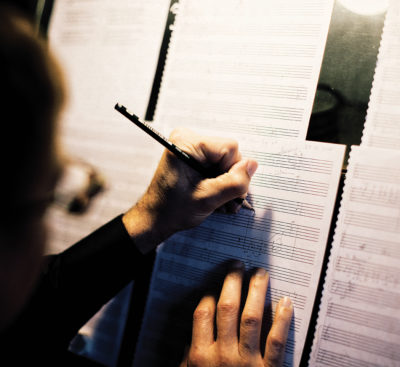 The family Bahr grew up in was not particularly musical. “Our family didn’t go to symphony concerts or things like that,” he says. “My exposure to classical music was what was in movies or cartoons.” He was one of four kids in Kansas City, Kansas. But his mother did make sure that he and his siblings took piano lessons. “My mom had this Victorian ideal that all little kids should be playing at the piano. So, we had a grandfather clock and a piano, and we should be there playing.” Bahr thinks this is where his call to write music started. But not for the reason you might think. “I wasn’t a great pianist,” he says. “So, I would change around the music to make it easier to play, or maybe just to put the notes where I though they should go.”

After he was whisked to the hospital that Sunday morning, his heart was restarted through a procedure called cardioversion. His heart was then back in rhythm, and a month later surgeons opened his chest cavity and implanted the missing wall in his heart. They coaxed it to grow natural tissue, to maintain the separation. That very painful procedure required a revision, so he had another round of open-heart surgery, plus seemingly endless procedures and surgeries and hospital stays. At last, though, it all worked. Today he has a heart that functions mostly normally, with occasional bouts of arrhythmia. He can do everything the rest of us can, including go to the gym regularly.

When Bahr sits down to write a piece of music, it is typically in the studio he has set up in his single-story home. Pushed up against a lime-green wall is the upright piano he played as a child, which he’s brought with him through six moves around the country, through his education and various jobs. Against the other wall is an electronic keyboard.

He’s a fan of old-school technique. “I start at the piano, with pencil and paper,” as opposed to computerized tools, he says. “I really like feeling the pencil and feeling the paper. There’s a certain flexibility you have there that you don’t have when you use software. I find that with my students, the software can limit their thinking. The measure has four beats in it, so they think they have to fill it out with four beats, and not make it ¾ time. Or there are all these instruments listed on the page and they think they need to give everybody something to do.” At the piano, he says, he is free to think about his own ideas and how he wants to express them.

“My colleagues or my students might compose something in Finale [a musical notation software], and if they don’t like it, they delete it and it’s just gone. It’s different from having sketched it out by hand and thought through what works and what doesn’t. What is it not doing that it should be doing, and how can I rewrite it? To me, this writing by hand is something that’s really important to my creative process.” 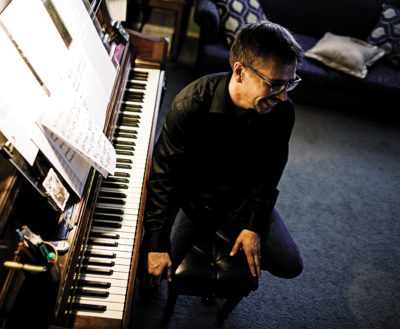 When he began thinking of his symphony, he started with an idea. It was back in 2004, and, he says, “I remember just feeling sick of the Iraq War. I found some Walt Whitman texts that gave the message that we need to be more thoughtful about war, and that it is very painful for the people affected. It’s normally my practice to study a text and to see what it suggests musically in terms of its form and musical ideas, and then let that influence musical ideas.” He based the piece on that and some other writing, weaving martial themes through the first four movements.

He wanted the fifth and final movement to be hopeful and illustrate a “new day, when we don’t have war,” he says. So, he decided to pull in a choir of very young voices. He enlisted the City of Palms Youth Choir from Fort Myers.

And he took on the challenges of writing for children, which we in the audience may never consider. “Children have smaller lungs and a restricted range,” he explains, “so you have to give them shorter musical phrases.”

And how about composing for instruments? There are all sorts of challenges in writing for them, too. For example, Bahr says, a flute and violin may play the same notes in the same register, but still their parts are different. The flute depends on breathing; the violin, on the bow. The violin can play two notes at a time, while flute doesn’t normally do that. Flute sounds loud high and weaker in lower range. And on and on. “So, you need to take all those aspects into account as you’re writing,” he says. 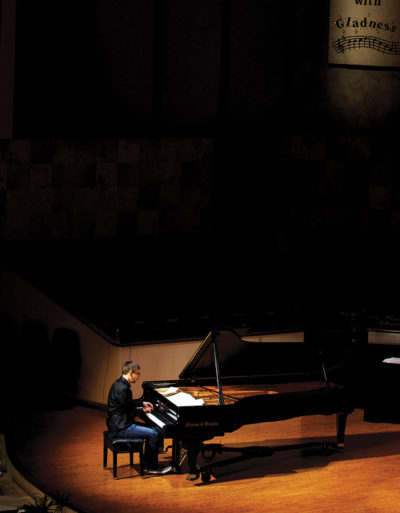 Now that he’s been at it a couple of decades, how does he think his work has changed? “I have a better perspective on it all,” he says. “I mean, I had a 2017 that was horrible. My chest was sawed open twice. I lost my mom. My dad got sick. Whatever difficulties I may have in the other areas of my life just aren’t going to compare.”

“And I believe I’ve become much more technically proficient over the years,” he says. “I don’t have to think about what the range of the oboe is, for example. I’m more efficient at using my time to be creative. And I like to think my music is more thoughtful and has more depth to it. I want to have greater cohesion and formal consistency. I can use ideas that will make the piece more profound. I think that’s all from just growing up as a person, as well as having more experience as a performing musician and becoming more familiar with music.”

“And I have fun composing. One thing that I really enjoy is that composers get to experience music in slow motion. If you’re a listener or a performer, music has a tempo and it’s measured out. That’s a great experience and I love that. But as a composer, you can really contemplate a single measure, and you can do that for hours if you want to. And I think that is just fabulous.”