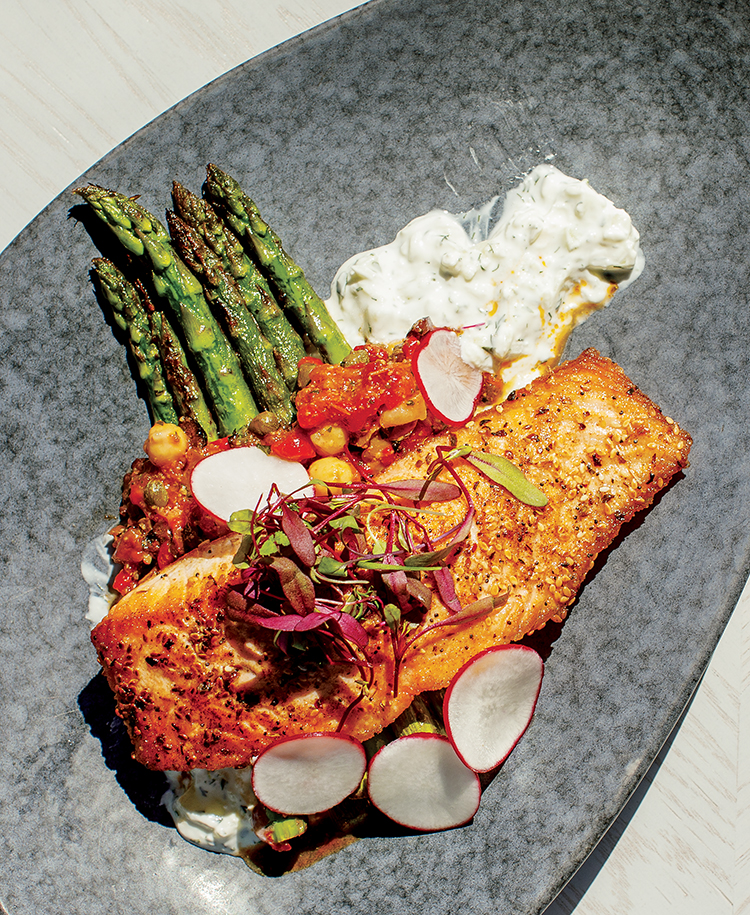 The hostess at The Hampton Social guided my dining companion and me to our table, and we wound through a strikingly cool restaurant packed with the beautiful people of Naples. They were drinking, laughing, conversing, and the din echoed off the brick walls and the ivy-covered ceiling. As we took our seats, my companion leaned across the table and delightedly declared, “Raucous!”

The Hampton Social makes no secret of its convivial intentions (something that rings true in its five other locations throughout Chicago and its environs). The words “Rosé all day” are emblazoned in pink neon against a wall beside the bar, the cocktail menu reads like a recipe for a spectacular night out, and the house drink of choice is that most sociable of beverages, rosé wine. I started with a glass of the rosé of the day ($12), which came from the French Clarendelle winery, while my friend opted for the Frosé ($13), a blended frozen libation of Tito’s vodka, rosé and peach puree that was peach-forward, surprisingly dry and quite good. 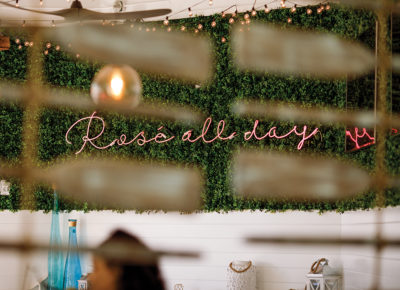 “I can’t really admit that I like it,” said my male friend who, despite recent advances in gender neutrality, was still embarrassed to be drinking a pink cocktail served in a coupe glass, “but I like it a lot.”

We liked the food a lot, too. We shared a plate of roasted Brussels sprouts ($14) drizzled with spicy-sweet chili honey, sprinkled with chopped almonds and served in a dish smeared with herbed goat cheese. The char on the Brussels sprouts was delicately accented by the sweet honey, and the effect was full and flavorful. We also split a jar of delectable bites of warm king crab meat ($22) lightly covered with melted butter and served with slices of grilled bread. We spread the crab meat on the toast and happily used the extra bread to sop up the butter in the bottom of the jar.

The Hampton Social’s menu is seafood-focused, and when we asked our waitress for a fish suggestion, she unhesitatingly pointed to the salmon.

“I don’t usually like salmon, but I love our version,” she said.

So I ordered the Shelter Island Salmon ($26), which was served with tzatziki, roasted peppers, chickpeas, olives and asparagus. The dish was fresh and light, an excellent rendering of a classic restaurant staple.

My friend, wanting to explore the non-seafood options, selected the steak frites ($29), a soy-marinated skirt steak served with dressed greens, French fries and a horseradish cream sauce. The steak arrived just as he’d ordered it—rare—and the soy marinade was an apt choice for the cut.

Though we neared the end of the meal, we were not quite done with the rosé. We chose the flourless chocolate cake with rosé custard sauce ($9) for dessert, and it was just the right note to end on—sweet, chocolatey and rich.

And the raucous crowd of beautiful people who were there when we arrived? They were still going strong when we called it a night.