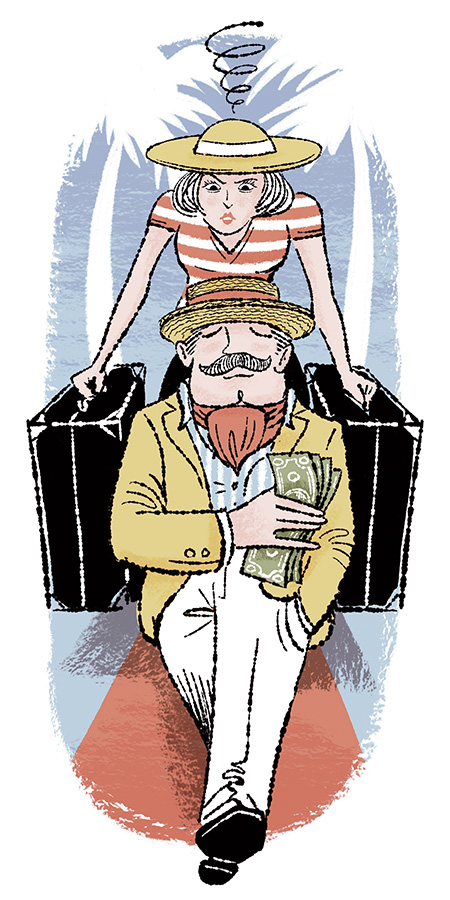 My husband and I are planning a summer vacation. We’ve researched places and met with travel agents. I want to go on a cruise. He wants to go to a resort. He feels that because he makes the most money, he should have the final decision on our trip. I feel slighted and embarrassed that he would hold the financial situation over my head. Should I let him win and go to the resort?—Peggy, Naples

Let him win? Get his way because he thinks money talks? Marriage is not a competition, nor should it be governed by who’s got the fatter wallet at the moment. I’m no marriage counselor, but I would say this situation is less about a trip and more about valuing each other and your respective wishes and desires. I think you two need a remedial escape to a planet called Compromise. Surely a travel agent could help you find some kind of cruise to a resort destination. Then you’ve got a win-win deal and a model for moving forward with a healthier relationship.

A Republican friend discovered toilet paper under my sink with a certain president’s face on them. It was given to me as a joke. I didn’t realize my guest might be upset if she found it. She is furious and thinks I’m a terrible person. What should I do?—Carrie, Fort Myers

On the one hand, you’re entitled to have whatever you want in your home. But I’d say toilet paper is probably not best for the décor, especially when it gets political. I know you didn’t want it showing, but you need to be more careful about hiding gifts that might offend those you invite to visit you. It’s too late to flush the evidence of this mistake, but tell your friend you’re sorry and hope she can wipe it from her memory.

A friend is constantly trying to impress me with how much she spends. If she gives a gift, she will be sure to let me know how much it cost. If she’s traveling, she’ll let everyone know she’s flying first class. If she brings wine to a dinner, she’ll tell the “bargain price at $X a bottle.” It’s beyond annoying. Everyone rolls their eyes. Should I tell her we’re sick of hearing about it?—Peter, Naples

I can see there’s a price to pay for a friend like this. Perhaps your friend has self-esteem issues and needs to feel important. You could express your irritation over her bragging, but maybe you should ignore her boasts and immediately reply with compliments about the qualities you truly value in her. Make her feel that she’s a treasure for those and not for the treasure in her checkbook. You’ll both be the richer for it.