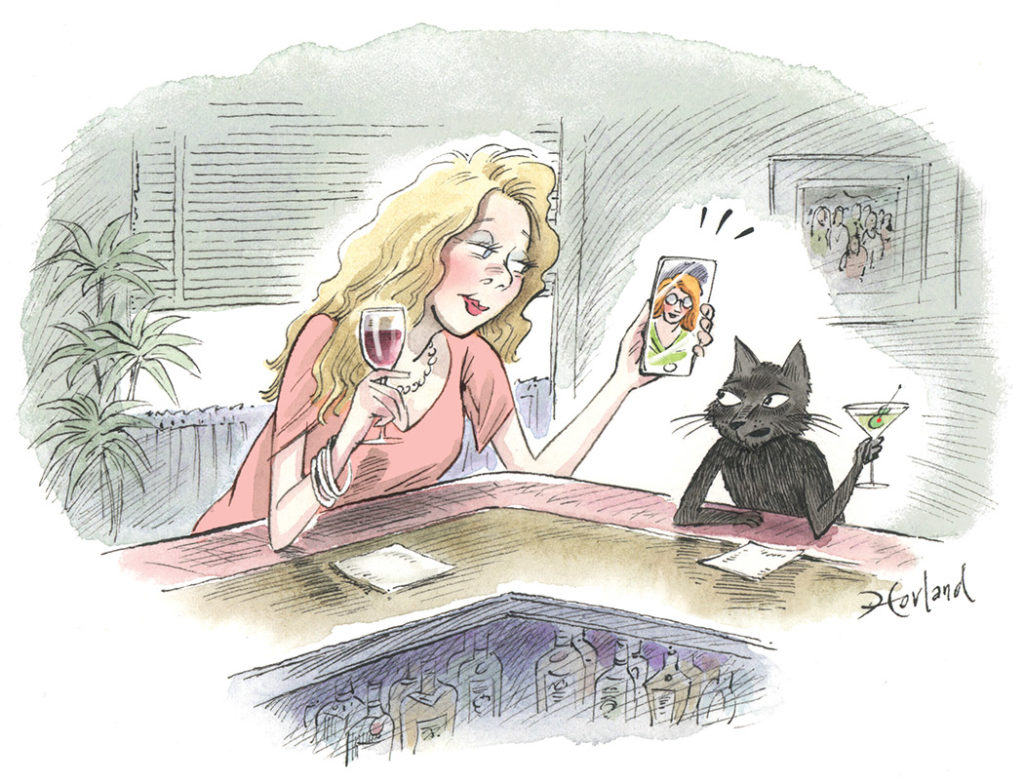 I’ve always wanted to sit down and have a conversation with my cat, Lalai.

My 21-year-old black feline has always been very vocal, especially for a cat.

No offense to dogs, but they’re supposed to be the loud ones. Between the barking and growling and panting—I’m not sure how my dog-loving friends get any peace. I like dogs just fine, but I gravitate toward the more reserved disposition of cats. Silence is, after all, golden.

Unfortunately, Lalai didn’t get that particular memo when they were handing out rules for cats. In fact, I’m fairly sure that Lalai and her late twin sister, Pony, were born with some canine DNA way back in their lineage somehow. Or maybe they never learned how to become cat-like because they were nursed and raised by a human: moi.

I’ve always been a cat person, and 21 years ago I was in the market for a kitten. However, my boyfriend at the time was forever wishing he could have a pony. I explained to Jason that we lived in an apartment and that a pony would never be comfortable living with us. It became a joke between us that he wanted a pony and I wanted a kitten. So, we decided to adopt a kitten and name her Pony.

Also at that time, my dear friend Terry Tilly was the executive director of Humane Society Naples. I called him and asked if he could find a black kitten for us (unfortunately, black cats aren’t adopted as much because of silly superstitions—therefore, I’ve always adopted black cats).

Terry told me that he had just the kitten for us. Not only that, this kitten and her siblings had been through quite an adventure.

It turned out that a homeless, pregnant calico cat was making her way across a busy intersection in Naples when she was hit by a car. The driver kept going, but a Good Samaritan stopped, rescued the injured kitty and took her to the humane society.

The veterinarian there had no choice but to do an emergency cesarean section to save her litter of four. The volunteers at the humane society bottle-fed the preemie kittens and cuddled them, as their mama was recovering from her injuries. The mother cat survived, and her heartwarming story of survival made the front page of the humane society’s monthly newsletter. Terry suggested that we adopt one of the black kittens in the litter—she was nearly weened, but we’d have to learn to feed her with a bottle. We hadn’t even met her yet and already we were smitten with Pony.

Terry suggested that he and I meet at one of our favorite restaurants—it was a mild March evening, and he would leave Pony safely in her carrier in his van while we caught up over a quick happy-hour cocktail. We were chatting so much that we decided on another cocktail. When Terry took me out to the van, I was feeling just a tiny bit tipsy and giddy.

As Terry opened the back of the van, I saw two tiny kittens cuddled up together forming a ball of black fur.

“Oh, now, don’t you worry about the other one,”  Terry said. “I just brought Pony’s twin sister along for comfort. You pick the one you want, and I’ll take the other one back to the shelter. Hopefully, she’ll be adopted, too. Again, I only brought her beloved sister because they’ve never been separated since birth. By the way, did I tell you that the other two in the litter were adopted together? The woman who adopted them didn’t want to see them separated. Anyway, you just go ahead and pick out the one you want.”

The cocktails did the trick. “Please give me both of the baby kitties!” I wailed.

We didn’t have a name for Pony’s sister, so the lady who owned the restaurant where we were dining immediately suggested “Lalai”—she said it meant “good luck” in Korean. Though I wasn’t certain that was true, I’d had two stiff drinks and thought the name sounded nice.

It was the best happy-hour decision I’ve ever made.

Sadly, Pony passed away in the fall of 2017 at the age of 19. Lalai is doing just fine but has become decidedly more vocal and needy since the loss of her sister. I suppose that’s to be expected, but when a friend of mine told me about Kathy Zablotzky, a woman from Scotland who brings her gift of communicating with animals to Southwest Florida once a year, I was excited about the adventure of having a “conversation” with my pet.

My friend Sadie saw Kathy when she was previously visiting Southwest Florida. She wanted to communicate with her 14-year-old dog, Bosco, who it turned out Sadie had a very long history with. Kathy didn’t even need to see Bosco in person—she used a photo of him and communicated to Sadie that she and her old pup had been soulmates for many, many lives. During the Crusades, Sadie was a soldier and Bosco was her horse. At one point, Sadie was a sailor and Bosco was the cat on her ship.

Although Kathy was back in Scotland, she could still do a reading via Facebook Live. I sent her a photo of Lalai, and we scheduled a time to get together online.

Kathy’s a lovely lady with a lilting British accent and a kind smile. She told me that she’s always felt a connection with animals, but she had to work hard to hone her pet communication skills before she could leave her day job and develop her business, I Speak with Animals.

I worry that Lalai’s plaintive meowing means she’s not feeling well, so Kathy asked her how she felt—Lalai’s answer: “I feel good, although I feel nauseous sometimes.”

I asked Kathy to ask Lalai how I could help, and through Kathy, Lalai recommended Nux Vomica, a homeopathic remedy.

I asked Kathy if Lalai missed anyone, and Lalai responded that she misses her “dog friend.” (Since Pony often acted like a dog, this actually made sense.)

When I asked Lalai what she wanted when she meowed, Lalai said “Treats.” I vowed to buy more tuna treats.

Lalai also expressed that she would like more “cuddles” and that if she could be anything besides a cat, it would be a human. She also said that she’d like to spend more time with me and that I might consider getting her a leash to walk her around outside. I had to say no to that—maybe old cats can learn new tricks, but walking a cat on a leash is not an adventure I’m ready to embark on.

It was good to talk with Lalai through Kathy, and I was happy to learn that Lalai’s doing OK despite the occasional hairball. Lalai hadn’t had as many reincarnation adventures as Bosco, but that’s OK—maybe next lifetime.

There are definitely more treats and more cuddles in store for Lalai, who has always brought good luck—and who, now, I can only hear meowing in a lovely British accent.