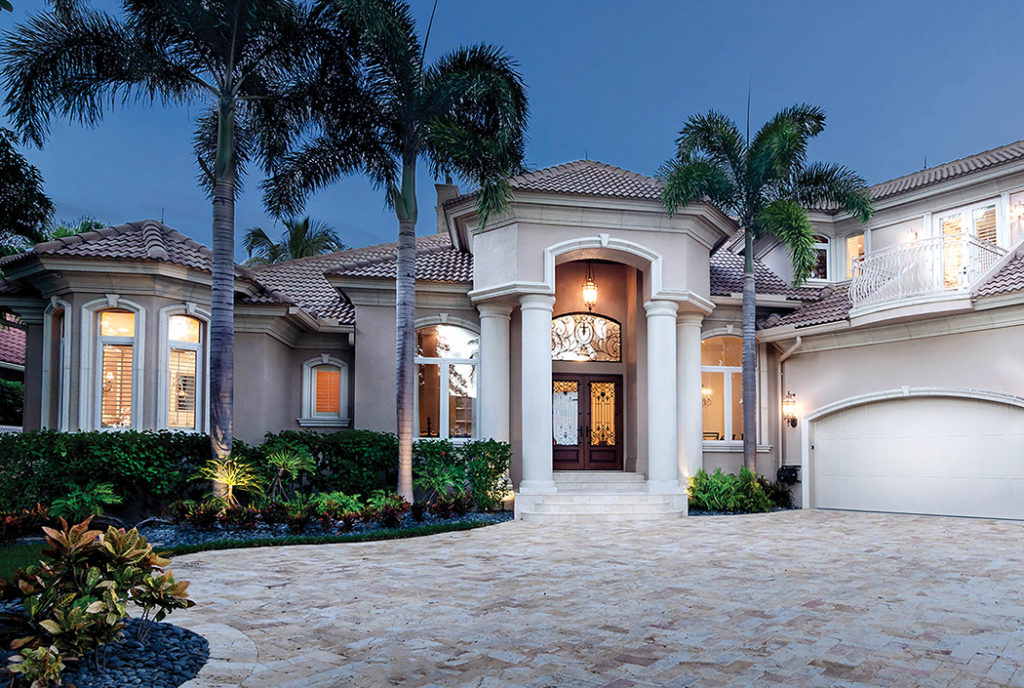 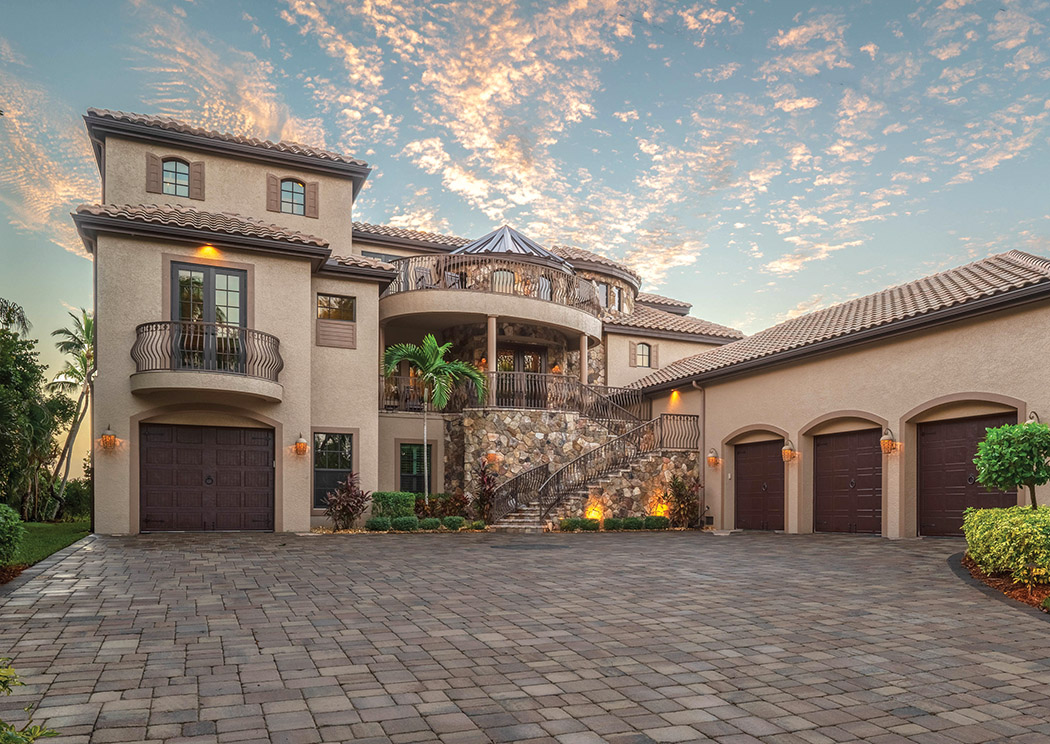 The home at 4689 Rue Belle Mer in Sanibel “checked a lot of boxes” for the out-of-state buyers who purchased it for $6.5 million in February. Nicknamed “Chateaux Sur Mer,” or “Castle by the Sea,” the nearly 7,000-square-foot, fully furnished fortress is located on an oversize lot, with expansive Gulf views offered from most every room. The two-level estate also features technology upgrades and unique craftsmanship throughout. “The original owners built it with completely unusual materials,” says listing agent Brooks Selby of John R. Wood Properties. Real stonework was added on walls both inside and out, adding to the home’s Old World Mediterranean feel, Selby says. Built in 2017 by Carlton-Naumann Homes, the compound also contains five bedrooms—each with its own bathroom (seven in all), living room and kitchenette, so extended guests can feel at home. Just outside the home is a second kitchen, fireplace, and elevated pool and hot tub overlooking the Gulf. The new homeowners don’t have to fight for space at the beach come season, either. “[The home] is offset from the road, so it’s in a very private stretch of beach that the buyers instantly connected with,” Selby says. 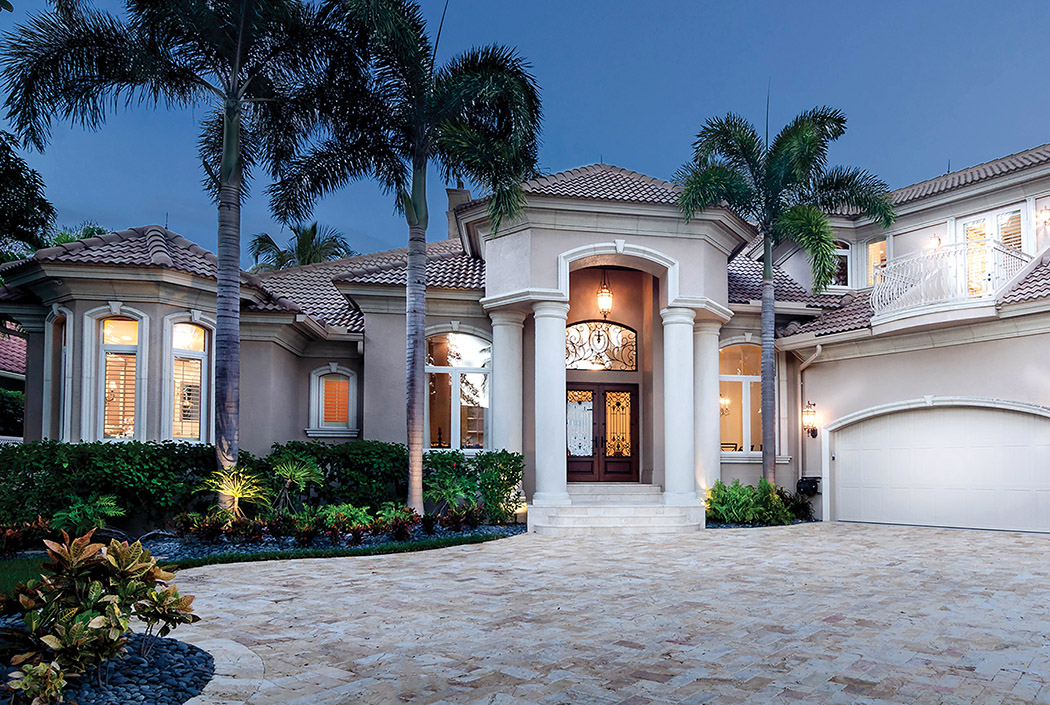 Out-of-state buyers scored a pad near top Naples attractions when they purchased the home at 567 21st Ave. S. in March. “It’s in a great location, where you can easily walk to Third Street for dinner and drinks,” Melinda Sullivan of Sullivan Realty Group at MVP Realty says of the 4,018-square-foot dwelling, which she sold to the buyers a little over a month after listing it. It’s also located at intersecting canals, “so you have this gorgeous waterfront view,” she adds. The prior owners fully renovated the 1999 estate in 2007, adding a new roof, impact-glass windows, more features for privacy, a saltwater pool and spa, and more. The transitional-style space was most recently freshened up with soft, white drapes and light, neutral walls. The open floor plan, which contains four bedrooms and 3 ½ bathrooms, is enhanced by high ceilings, light-filled rooms and sliding glass doors. The new buyers can also enjoy a stone fireplace, Clive Christian cabinets and a well-appointed kitchen, along with two boat docks and lifts, a somewhat unique feature in the Aqualane Shores neighborhood, Sullivan adds. 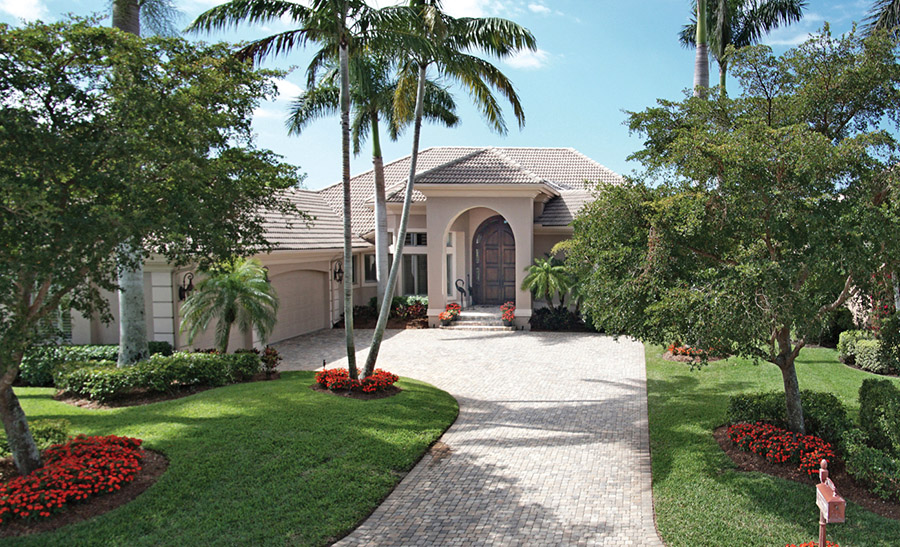 Buyers from up north purchased the home at 10571 Glen Lakes Drive at Shadow Wood in Estero for just above $1 million in spring. “It has many standout features,” listing agent Ed Gongola with Downing Frye Realty Inc. says of the property. Just beyond the wood entry doors are detailed ceiling treatments, crown moldings, travertine floors in the main living room and covered outdoor space, and even a TV concealed by a large picture in the living area. Glass sliders open up to a gazebo, outdoor kitchen, and screened-in pool and spa. The 2005 Kingon Homes Grandview model is award-winning, with three bedrooms, five bathrooms, a fireplace and a large gourmet kitchen spread across 3,079 square feet. The home has a Mediterranean-Tuscan style, but “was kind of timeless with the way it was done on the inside,” Gongola says. The home also comes with a three-car air-conditioned garage and multiple membership options to Shadow Wood Country Club.