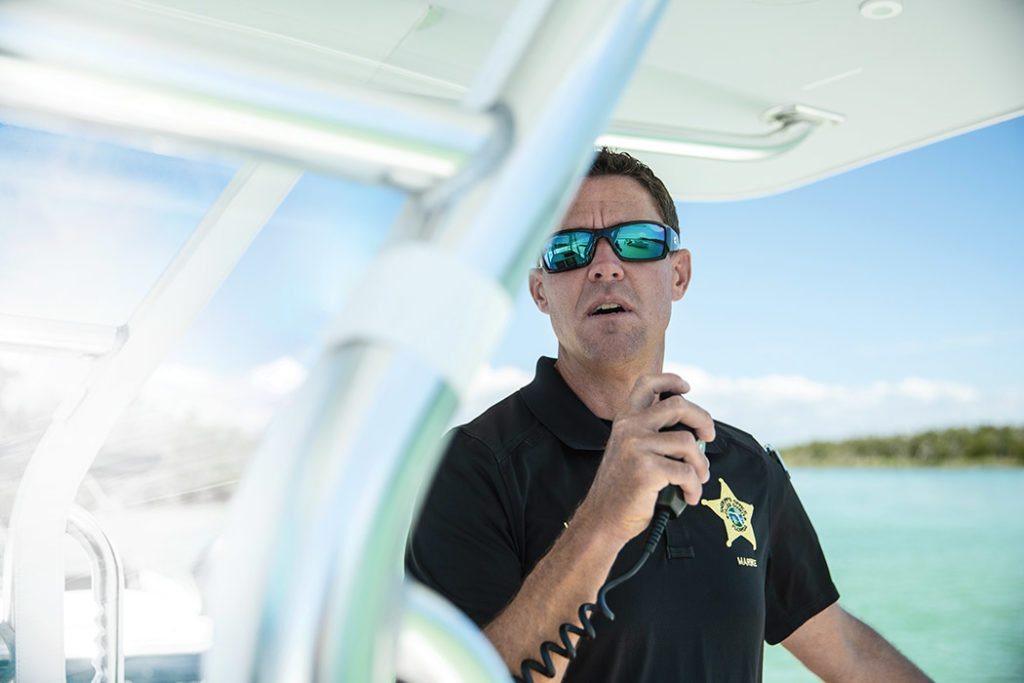 Corporal Josh White, a member of the Marine/Aviation Bureau and a Public Safety Master Diver with the Collier County Sheriff's Office Special Operations Group, responds to an emergency call for a woman who broke or dislocated her hip while doing yoga on a remote beach on the southern tip of Kice Island in the Ten Thousand Islands. The emergency response was an all-hands call involving units from Collier County Sheriff's Department, Marco Island Police, Greater Naples Fire Rescue, and Florida Fish and Wildlife Conservation Commission (FWC).

We watched as a skiff approached opposite our 33-foot Interceptor patrol vessel, which Cpl. Joshua White was commanding.

“There’s our guy from yesterday,” White said. “Same clothes and everything. He’s got to be hurting.” The gray-haired, pony-tailed man, wearing a nautical-themed T-shirt, waved at White.

“Well, he waved with all of his fingers and everything. Not just the middle one,” White said with a smile.

We had heard the tale of this solo boater a little earlier in our 10 a.m. to 2 p.m. ride-along with the Collier County Marine Bureau. It was a partial answer to our question of how officers based on the waterways spend their days and what situations they encounter.

We discovered that days for the Marine Bureau were a lot like the waterways themselves: often calm, sometimes rough, mostly unpredictable, every now and then volatile.

And as any fisher will tell you, there’s no telling for sure what you’re going to catch.

Apparently, the day before had been an experience in catch and release for White.

From bits of one-way phone conversations and some details he shared, we learned that the man in day-old clothes had run out of gas and floated around Goodland Bay until the people he had been with earlier called the Coast Guard to report him missing.

The Coast Guard called the Collier Marine Bureau. According to the joint Lee and Collier County Marine Emergency Response Team protocol, the closest among the local governments takes the lead on the call.

In this case on a Sunday night, he was Collier County’s guy, Mr. Party of One.

The Monday-morning debriefing was on. The phone rang on the boat for a second time.

“Yeah, we towed him over to Stan’s Idle Hour. They allowed him to keep his boat there. He was highly intoxicated.

“His party left him. Those people apparently thought they weren’t dealing with him. I guess they got in an altercation with him. By the time we found him he was full of Corona and Xanax.

“Under the bridge, yes. Underneath the bridge on that shoal.”

For his passengers, White filled in the rest. “We poured him into an Uber and sent him home. He couldn’t drive. Had six DUIs.”

But by 11 a.m. the next day, Party of One was once again plying the waters, captain of his dinghy, with no fresh demerits to his name.

We’re not going to say that the Marine Bureau is a watered-down version of law enforcement, but it’s clear that officers’ general approach and apparently the clientele are different. Keeping boaters safe on the water is the first priority, White says. Since Party had run out of gas and therefore wasn’t operating a boat while drunk, he was spared that charge. And he didn’t get behind the wheel of a car, either. So, no new DUI.

And there’s no law against wearing the same clothes two days in a row.

We heard about a Jet Ski sinking off Lovers Key on Sunday, too, and a recent hit-and-run on the water in Smokehouse Bay near Marco Island.

And Monday afternoon, White was patrolling in Marco Bay and responded at full speed and siren to a call about a medical emergency. He was first on the scene in a joint response with the Marco Island Police and the Greater Naples Fire Rescue. A woman in her 60s on Kice Island, a puddle jump south of Marco Island at Blind Pass, was practicing yoga with her granddaughters when she injured a hip.

Greater Naples Fire Rescue arrived about five minutes after White, who assessed her according to his basic first-aid training then helped Greater Naples officers carry her on a backboard to their boat.

Her daytrip to the Kice Island beach cut short by what seemed to be a dislocated hip, she was shuttled to dry land and taken by ambulance to Physicians Regional Medical Center.

A yoga injury was a first for White. “You never know, though,” he said. “Every couple of days we get a call on a medical emergency.” Most frequent are incidents of chest pain or actual heart attacks, more than once occurring on charter fishing boats. “Man overboard” is not uncommon, nor is a case of diabetic shock. “They’re things just like you’d get on land,” White said.

But Monday morning was absent of major incident, the ride smooth sailing.

Rather than full of sinking boats, yoga injuries or hungover captains, safe boating school was in session on the Collier County waterways, even if the pupils were years past the classroom.

White is teacher and principal; his main form of discipline is a warning. He said he issues about 40 warnings a month and writes maybe two tickets.

“It’s different out here from other types of law enforcement,” said White, who was born and raised in Naples. “It’s my way to give back to the community.” “It’s a different crowd out here,” he said. “People are out here to recreate. They’re not burning up the road trying to get to work.”

Before landing in the Marine Bureau, White was on the road in Golden Gate. “I’ve done the midnight shift dealing with the other side,” he said.

On the boat he carries a 9-millimeter Glock, mainly because out on the water, any officers who could provide backup are far away in both distance and time. He’s not had to fire it in his 15 years in this role, but he has noticed that things seem to escalate faster on the water than on dry land.

He has learned that he’s more likely to find boaters speeding in Goodland Bay at the end of Marco Island, fishers bending the rules in the Barron River at Everglades City. There was a time when drug smuggling was a big issue, in the ’80s, and a time for chasing down boatloads of Cubans, until about 2010. Back then, invariably a boat captain ferrying undocumented immigrants would spot law enforcement and officers would get confirmation by listening to the police radio: “Big fish in the pond!” they’d say. Most of that has dropped off, said Collier County Sheriff Kevin Rambosk, as U.S. relations with Cuba have improved.

On that Monday morning, White used just a polite blip of a siren—“Whoop!”—and sidled the 33-foot center-console, twin-engine vessel up to a boatload of four older men on the Reel Fun, among them dangling 10 fishing poles into the water.

“Catching anything?” White asked by way of greeting.

Just catfish, one of them said. Hoping for redfish. Or, well, anything but catfish.

White asked to see the boat registration, a photo ID and fishing license. Owner Joe Perino was from Marco Island and New Jersey. White said his wife was from around there in New Jersey. From early in the encounter, they were like neighbors talking over the fence, going through the number of life jackets, the indicator light on the fire extinguisher, the expiration date on the flares. Oops. Expired.

“You’ve got to have three current ones,” White said. “When you get in, go over to Walmart or West Marine and replace them.”

White asked Perino another question, but Perino couldn’t hear him, so his three friends shouted the question at him, laughing.

“You guys are great,” White said, laughing too. Inspection over, he said, “Alright gents, replace those flares. Have a good day.”

Proactively patrolling the waterways is one of the bureau’s goals, Rambosk said. The other purposes are providing emergency response and law enforcement, “for those few people who want to operate inappropriately. … We do have individuals who come (onshore) from the waterways to commit crime.” Crime isn’t always subtract ing boats from their owners. Often, thieves grab the gear boxes or the motors.

The 300 square miles of water within Collier County boundaries account for 12 percent of the county and “the reason we make the investment we do,” Rambosk said.

Officers in the Marine Bureau speak about boating safety at boat shows, to groups, and conduct an annual community cleanup at Keewaydin Island.

Officers train and cross-train for positions within the department.

White is a flight officer and a recovery diver, as well. Another 10 officers are trained to substitute or add staff to the Marine Bureau as needed.

At times White and his fellow officers can seem like waterway tour guides. It’s no small feat to learn to navigate the wet portion of Collier County, because the landmarks can be as difficult to distinguish as those in a corn maze. White estimated it took him two years to construct the mental map that would allow him to get around if the boat’s GPS system went out.

Meandering around the Ten Thousand Islands is a challenge, even if they really only number in the hundreds. Nearly all are uninhabited and looked like random clumps of broccoli to a passenger. Part historian as well, White pointed out spots where islands were divided into passages just wide enough for the old school bus boat to pass through, in the 1940s and ’50s hauling kids to Everglades City for a day of instruction. On the water in Everglades City was the Outward Bound camp occupied in the summer by students and their chaperones from North Carolina; closer to Marco, the estate Alanis Morrisette’s uncle bought for her at one time, although she’s there infrequently.

Another part of a marine officer’s job is to assist Florida Fish and Wildlife Conservation Commission in protecting natural resources, from manatees to mangroves, the latter of which often looked like the bony hands of skeletons reaching out for something, or somebody.

The terrain can be desolate, and the job a lonely one for the wrong person. White and his fellow officers are often out on a boat alone for the day, bringing along lunch or stopping at one of the dockside restaurants of Collier County waters. In Everglades City, “FOOD” is painted in huge letters on what turned out to be the weathered waterfront bar of City Seafood. “If you don’t really love being out on the water, you’d not like (the job),” White said.

As for this officer, it had been his goal all along to join the Marine Bureau. His father taught him to sail at about 5 years old. A job after high school at the Naples Pier introduced him to waterway law enforcement, and he trained his way aboard.

For most of the day, officers like White are out passing by vessels with names like No Bitchin’, Little Liza and Mine & Yours, with only the imagination to picture the people behind the names.