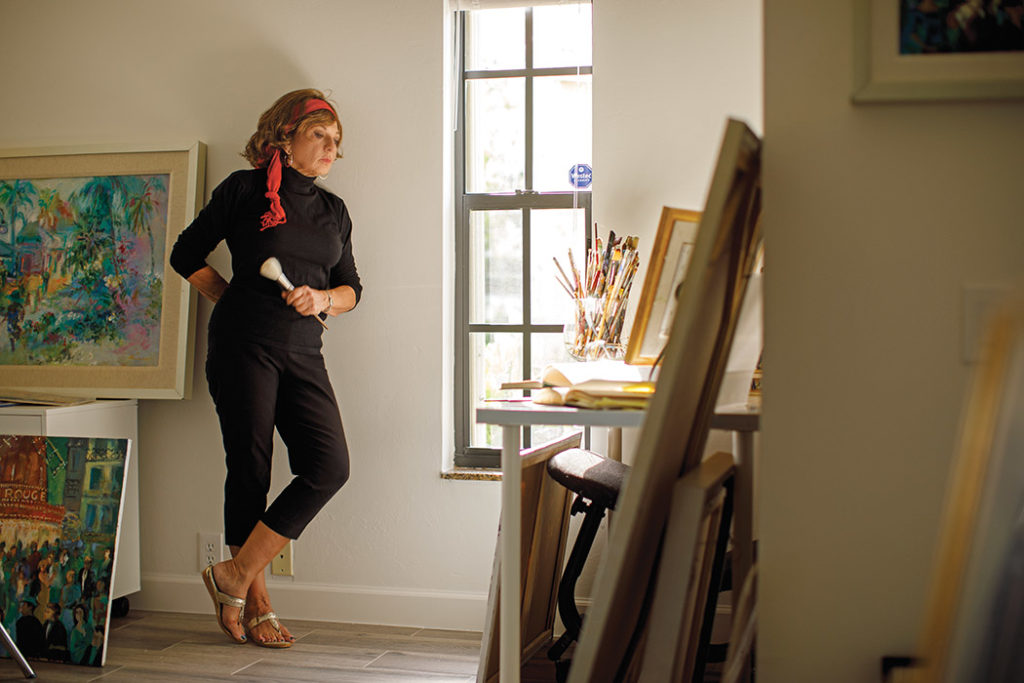 The first portrait that Janine Wesselmann painted on commission caused the sort of dramatic reaction that most artists only dream about. It was a portrait of a king, for starters. Wesselmann was in the Peace Corps, training in Arizona to go to Libya, when some of the Libyans there asked if she could paint their King Idris. This was 1969. Because some Muslims believe they should not depict living figures, they hired Wesselmann for the job. “They figured, this heathen woman can do it for us,” she jokes. “I was thrilled to bits.” Because her training ran from 7 in the morning until 9 at night, she stayed up nights painting. “I finally finished and was quite pleased with it,” she says. “But as a woman, I wasn’t allowed to present it to him.” That’s when the excitement started.

“About 10 minutes after the head of our group had presented the painting, I saw the Libyan men racing down the street. They were holding my painting aloft and it was on fire. Apparently King Idris had just then been deposed. So now it was, ‘Death to the artist who painted him!’ We were in Arizona, so I wasn’t in danger-danger, but they were coming after me.” She high-tailed it out of town. “And I thought, ‘Sure; this is the career for me!’”

She laughs as she relates the story today from the couch in her peaceful, sun-drenched Naples home. Wesselmann, 71, is trim and energetic, dressed smartly in black pegged pants and a crisp black-and-white-striped shirt. One strand of her short auburn hair springs repeatedly onto her forehead and she pushes it back again and again as she talks. She recently moved into this house from elsewhere in town, so there is lots of white wall space to be covered with paintings. The furnishings—a mirror from Indonesia, drums from Kenya, an abacus from Morocco—reflect the childhood she spent moving around the world, as the child of a State Department employee.

“We moved from revolution to revolution,” she says, “I thought it was pretty exciting. We would always be flying out at night before a coup.” Her father’s work took her to such places as Kenya, Haiti, Iran and France. “There was always danger,” she says. “There were curfews almost everywhere we went. In order to get my allowance, I had to hit the target with my little .38. Luckily, I never had to use it. But if we had been affiliated with the last regime and there was a coup, it was bad.”

Which certainly prepared her for the King Idris incident. And also for life as an artist. “I felt like an outsider almost everywhere,” she says. “I was from a different country, spoke a different language. In order to have any self-confidence or survive in the world, I had to go within. And for visual stimulation and intellectual stimulation, it was super. I just loved it.” She discovered her love for painting and for expressing herself visually early: at age 6. Circumstances encouraged it, too, she says. The family was usually without reliable electricity, running water or entertainment. So, she says, “there wasn’t much else to do but read and draw.” (Wesselmann has one sister, Nancy Maxwell, 68, a history instructor in the area.)

Getting Back to Nature

For a time, Wesselmann was known for her satirical representations of people and their positions in society. She had been exposed to so much political turmoil and intrigue, she says, so she commented on it in her work. “I was frustrated with how people weren’t communicating.”

Today, her work features the bright colors that helped draw her to Naples full-time four years ago: buttery yellow sunlight, the cool blue of the Gulf. It’s more abstract now, with more layers. “My work is much looser, and more evocative, I hope.” It’s a response to her environment but also, she says, “a bit of rebellion against what’s going on in the art world now, which is ultra-simplicity—even, in some cases, where there isn’t much behind the surface.”

“I feel like if someone is going to have a piece of work on the wall, that it should inspire them. I think the old formula was that the artist puts in 80 percent and the viewer puts in 20 percent. The viewer adds to what’s there. So if you look at one of my paintings, let’s say on the surface, it is people in the market. You can see the people, you can see the market, but if you start looking deeper, you’ll see many more interactions that aren’t so obvious. It becomes deeper.” To get this layered effect, she may do 10 different sketches of that same market. “Then I just add all the people into it and all the things I saw.”

How She Does It

Wesselmann is as enthusiastic about her work now as she ever was. Maybe more so. Most days, she says, she can’t wait to get to work. She gets up early, around 6:30, and meditates for 20 minutes. It helps her quiet her mind and clarify her focus. She gets her coffee, and then she and her cat, Emma, head into the studio, which is a large, sunny room just off the pool. “If I’m starting something new, I’ll have the canvas prepared from the night before. I’ll have all the paints out and the palette set up. Then I just jump in. If I’m continuing a painting, I’ll just continue. I’ll often work until midnight. And I’ll maybe go three days without coming up for air, then crash and burn. That’s not ideal. But when I’m really excited and into something, I don’t answer the phone, I don’t do social things. But then I’ll stop and go dancing. So on just a normal day, I’ll paint all day and dance all night.” She’s a ballroom dance aficionado, frequenting Allstar Dance Studio and Modern Steps in Naples, or DanceLife in Bonita Springs.

One must have fuel for all this energy. “My diet is really good,” she says. “It’s potato chips, M&M’s and Jack Daniels.” She pauses to laugh. “I need the salt, I need the sugar, and I need the Jack Daniels to keep the excitement down. Otherwise I am flying off the walls.”

Does it bother her to go for days without human contact? Not a bit. “I’m quite happy in my own little world. I do love people and I love having them in my life. But when I’m focused, my world is huge. And the quieter it is, the deeper I can go. And I really like having the opportunity to be completely focused and exploratory. I like to expand my horizons, and that gives me the space to do that. Not only do I try to connect with myself when I’m painting; I try to connect with other people, and I love to connect with a higher power.”

And if she gets stuck on a piece? “A glass of wine,” she laughs. “I may try to fight it out, but that’s not smart. I’m trying to learn now to let it go and focus on something else, even if it’s for a short period of time, then go back to it. That’s a healthier approach than trying to beat it to death. Naples is wonderful for this because it’s always warm out. So I can just go for a walk or go downtown to shake it off. Sometimes I may turn the canvas upside down or on its side for a new perspective. Because ‘stuck’ is really in the mind. Paintings take on a life of their own. You have to pay attention and listen to them. I need to quiet myself and listen to what needs to be. That’s when I get the best results.”