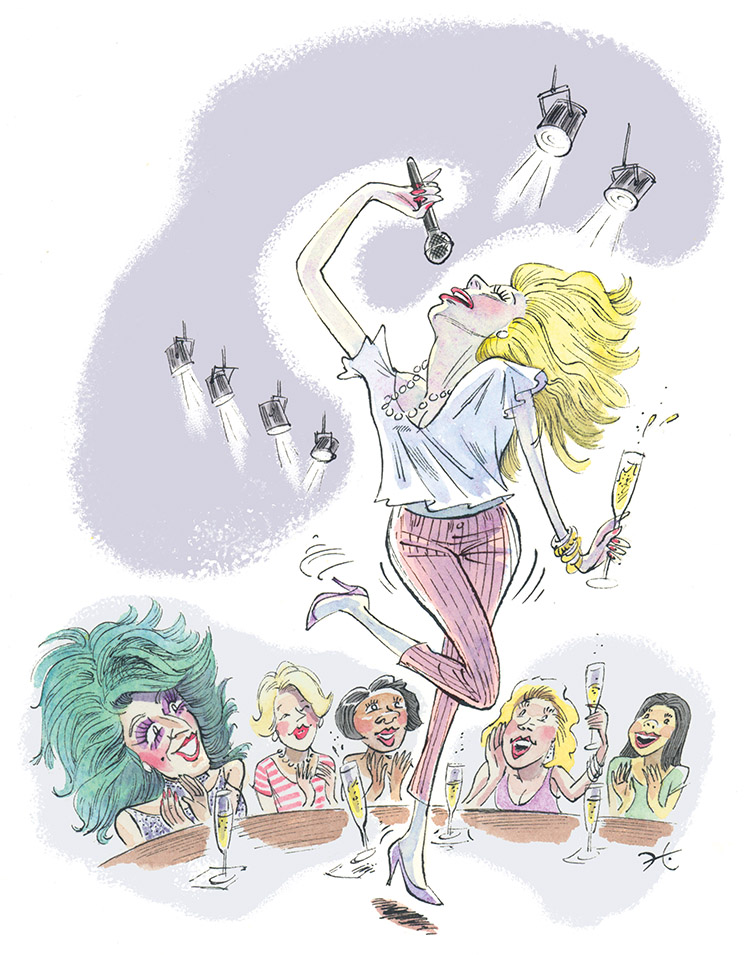 Until I was around 20 years old, I believed myself to be a beautiful singer.

In fact, I’d practice in the car and in the shower regularly. I knew most of the words to The Way We Were by Barbra Streisand and I was certain that I sang it as well, if not better, than Babs herself. But, I had even more in my repertoire—I could sing the country hit Delta Dawn with all the pathos of Tanya Tucker, and I used to belt out New York, New York with such gusto that it would give Liza Minelli a run for her jazz hands.

So, at that tender young age of 20, when a local community theater held auditions for The Sound of Music, I was ready. Naturally, I would try for the part of Maria, the leading role that Julie Andrews made so famous. It didn’t daunt me that I’d had no musical training whatsoever (other than playing the triangle in second grade) or that I’d never sung publicly—I was ready to unveil my hidden talent: the voice of a songbird. I would win the role and a star would be born.

When I confidently strolled into the audition room, the musical director behind the piano asked me for my sheet music. I had to confess that I didn’t have any because I had no idea what sheet music was—and besides, what does a future Grammy Award winner need with sheet music? Just wait until he heard my voice! The musical director, a man in his 70s with thick white hair and a jaunty scarf around his neck, sighed, rolled his eyes and asked me what I’d be singing. The only song I knew all the words to was Happy Birthday.

“HAPPY BIRTH—” I started when he suddenly stopped me, a pained look on his face.

He patiently explained that he would play a note on the piano and I should echo it with my voice. We attempted this exercise two or three times when he finally looked at me with very kind eyes and said, “My dear girl, I must tell you that you are clinically tone-deaf.”

And he was right. I tested my voice out on dear friends and loved ones, and while I heard the voice of Barbra Streisand coming out of my mouth, they heard the wails of a dying cat. My dreams of musical stardom were crushed.

As a result, singing in public is definitely not in my comfort zone—at all. But, somewhere outside of one’s comfort zone lies adventure.

I was ready to take on the challenge of singing in public despite the fact that I can’t carry a tune in a bucket. And what better place to resurrect my long-buried singing voice than at the weekly Drag Queen Karaoke Brunch at The Standard in downtown Fort Myers? Because if drinking bottomless mimosas for several hours doesn’t get you up in front of a crowd to croon, what will?

The lovely and talented Alyssa LeMay hosts the brunch, which takes place every Saturday, and her awesome singing voice, fabulous costumes and colorful wigs typically bring a standing-room-only crowd (reservations are recommended).

For the most part, brunch at The Standard is a girls’ day out. One table of ladies in sundresses and cute, messy buns were celebrating a birthday. At another table, happy ladies in pastel colors clinked their mimosa flutes at a bridal shower. The mood was festive and sparkly. Everyone wanted her picture taken with Alyssa, who wore a bounteous teal wig and a dazzling silver metallic dress, low-cut on top and short on the bottom to show off her décolletage and long gams.

I reserved a table for 10, because when you’re clinically tone-deaf, you need the support of friends. You also need sustenance, and brunch at The Standard does not disappoint. I had a breakfast sandwich with crisp tasty bacon, while my friend Sadie ordered a hearty plate of chicken and waffles. My friend Shelley went with one of the famous eggs Benedicts, and our friend Karen had a fluffy veggie omelet. Everyone finished their plates, as it’s not a good idea to drink pitchers of bubbly and orange juice on an empty stomach.

A few of my friends are theater folk, and when handed the karaoke mic, they weren’t shrinking violets. Cantrella Canady crushed I Am Changing from Dream Girls, while Shelley belted out Cabaret. From a nearby table, an unassuming young girl in a Lilly Pulitzer dress bashfully took to the stage, mimosa in hand, and surprised the whole room with a rocking version of Somebody to Love by Queen. Somewhere, Freddie Mercury was smiling.

When it was finally my turn, my stomach was full of bubbly and butterflies. I was a nervous wreck. I wisely chose The Devil Went Down to Georgia by the Charlie Daniels Band because it’s mostly spoken-word and might have been less torturous to the audience than, say, Delta Dawn.

Alyssa gave me the mic and at first I shook, but then as I read the words scrolling across the karaoke screen, I became more adventurous and began to dance a little. About halfway through the song, as my friends clapped and cheered me on, I started dancing even more, and before I knew it, it was a full-on jig. Strangers were filming me on their cellphones, and I didn’t care if I ended up on YouTube—I was having fun. Suddenly, I didn’t care what I sounded like; maybe I am clinically tone-deaf, but I can dance.

I was on a roll. Later, Sadie and I did a duet of Don’t Stop Believin’ by Journey, and then Standard owner Chris Blauvet and I brought down the house with Bad Company’s Feel Like Makin’ Love. My comfort zone became the karaoke stage, and no one complained (out loud at least) about my voice. Maybe mimosas are just as good for the ears as they are for the voice, or maybe it was the magical presence of Alyssa LeMay, or it could have been all the girl power in the room. More likely, it was a combination of all of the above.

Whether you’re troubled by a musical director from long ago, or that insecure voice in your head, follow the lead of the magnificent Alyssa LeMay when she says, “Girl, don’t let anyone dull your sparkle.” 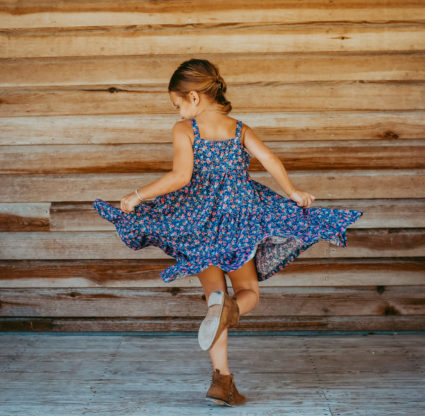 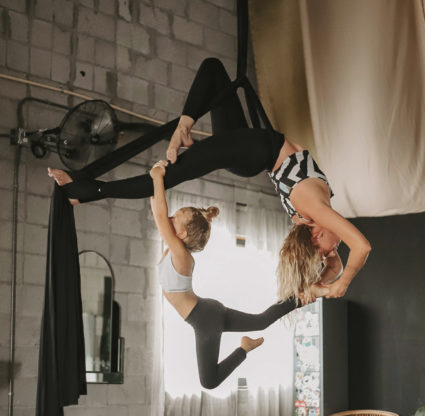 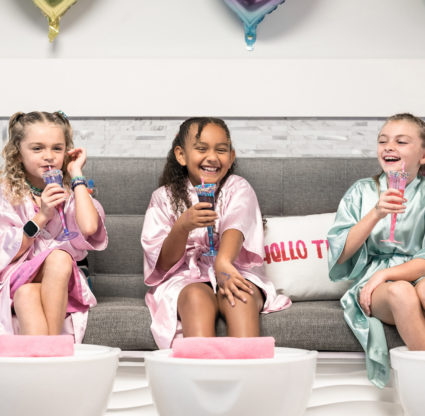 Miss Lexi’s Place: A Salon and Spa for Kids

From haircuts to facials, Miss Lexi’s Place in Naples caters to the wee set. 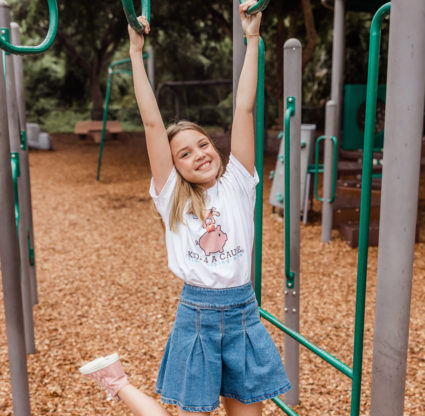 Meet 10-year-old founder of Kidz 4 a Cause nonprofit

Ten-year-old Sutton Shanahan rallies other kids to prove you’re never too young to make a big difference.
CONTACT US TERMS OF USE