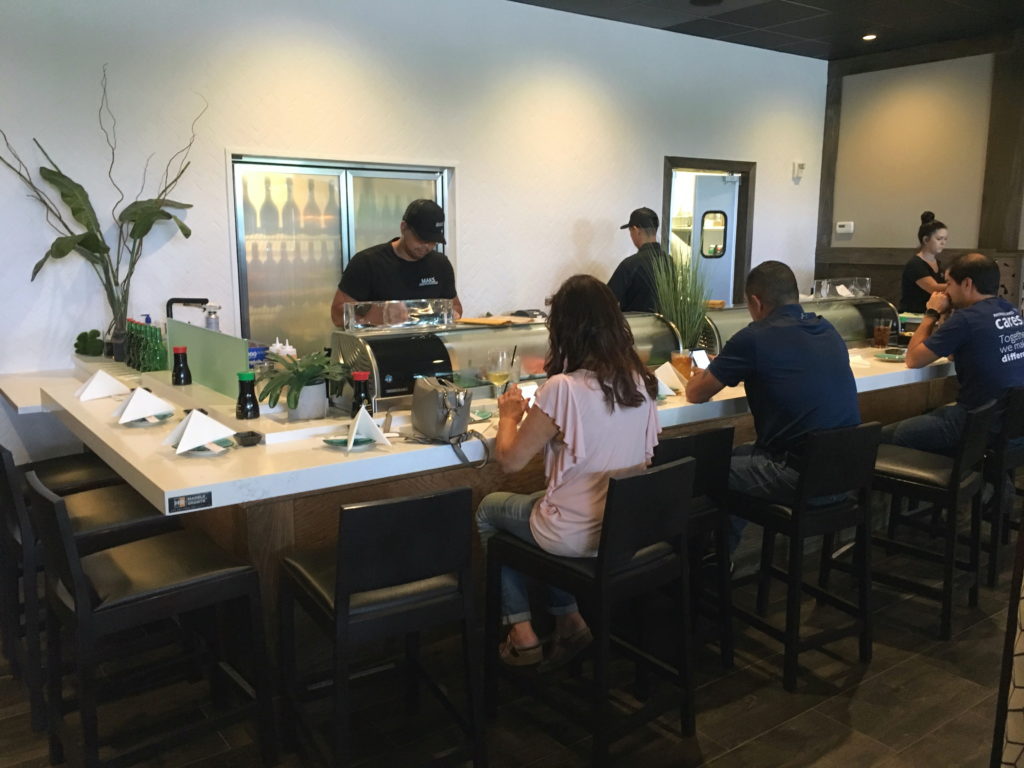 For this mission I had to call in my for-hire sushi expert. That would be my son, Aaron – easily for hire at the mention of a free sushi meal.

Newly opened in a corner storefront of a Publix plaza on Fiddlesticks Boulevard in Fort Myers off Daniels Parkway, Maks Asian Kitchen & Sushi traces its pedigree back to Hong Kong and to the original staff of Blu Sushi, which used to be Aaron’s gold standard. Until Ember Korean Steakhouse opened in Fort Myers.

For him, it’s all about variety of rolls, and Maks lists 25 traditional and out-of-the-ordinary rolls on its extensive, pan-Asian dinner menu. We chose from a slimmer selection at lunch, when the sleek, designer space was doing a brisk business. A few bellied up to its brightly lit L-shaped sushi bar, while others filled deuces and four-tops well-spaced around walls and room dividers displaying tasteful Asian-influenced art and accents.

We settled on the PB&J and Spicy Salmon Oscar rolls. Other options let you mix and match two whole rolls or combine a roll with sushi. We voted the PB&J the better of the two, a nice melding of creamy, crunchy, spicy and salty. (For those not up on sushi lingo, it’s spicy tuna, cream cheese, tempura white fish and eel sauce.)

We also ordered one of four bento boxes. A great deal at $13, it included a miso soup starter, then the typical sectioned box (the original Lunchable®) containing a small but tastefully dressed salad, four pieces of California roll, rice and, in our case, garlic broccoli with tender slices of beef and a sauce that defines the word umami.

We will be back for dinner, to try the ahi poke, raw fish with jalapeno salsa, sashimi, squid salad, red curry and stir fry udon that caught our eye and captured our appetites.