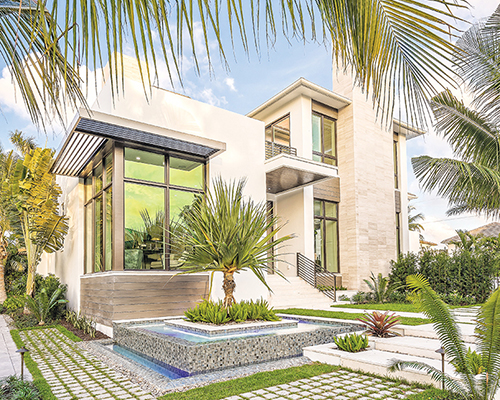 Presence. When you’ve got it, flaunt it. And from a design perspective, 333 Gulf Shore Blvd. S. certainly has it. From its powerful curbside stance to the clean lines of its spacious interior, the 5,896-square-foot home is a beautiful example of Naples’ design evolution.  Modern—but not graphic or loud—the home presents transitional design (that magic intersection of traditional and contemporary) that is unapologetic with its styling cues. Consider the dynamic stone-clad monolith in front and its glass-encased stairs. Or the resort-like pool area with its sunken kitchen, which sits under a retractable Renson trellis and features fire pits and lounge area. Put it all together and you have a home that welcomes guests to the future of Naples. “We wanted it to make a statement,” says Realtor and developer Dante DiSabato, who, along with his father, Mark DiSabato, own Limitless Development, the company that built the residence. “We wanted to push the envelope and express our vision for where we see Naples going.” Located in the heart of Old Naples, two doors from the sands of the Gulf of Mexico and two blocks from Fifth Avenue South, the home has four bedrooms (including two master suites), an office (or fifth bedroom), a lo
Subscribe Now and unlock unlimited digital access.
Already a subscriber? Sign In.