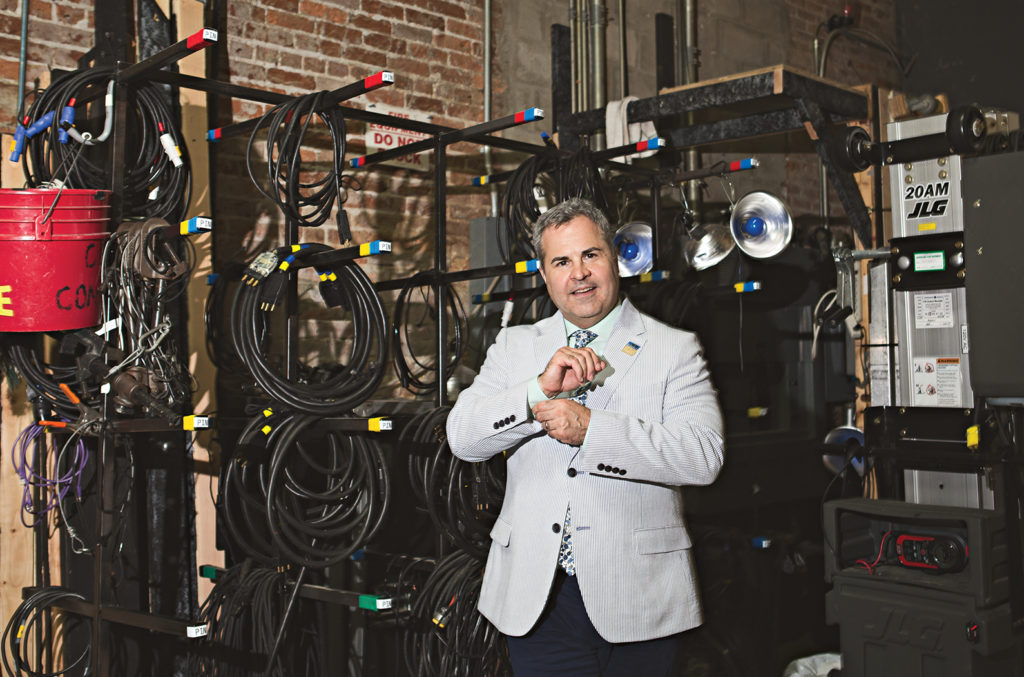 Greg Longenhagen poses for a portrait at the Florida Repertory Theater in Naples, Florida.

Greg Kenneth Longenhagen is an actor, a director, a theater educator, and now he’s the leader of Lee County’s largest arts organization, the Florida Repertory Theatre. But he’s not necessarily a showman (though he’s got the chops and charisma to be one).

A soft-spoken lover of his craft, the 52-year-old Allentown, Pennsylvania native prefers to see others shine in the spotlight. Longenhagen has been with the Florida Rep for 21 seasons, since the beginning. During that time he has worked on more than 60 shows and acted in nearly 30, but he isn’t the kind of guy theater patrons might recognize while shopping at Publix. On stage, he’s mostly played an everyman chacter: Bob Cratchit in last year’s “A Christmas Carol” and Baltimore Sun reporter E.K. Hornbeck in “Inherit the Wind.” Traditionally, Longenhagen disappears into his characters.

But he won’t be disappearing in his new role as the artistic director of the Florida Rep, Fort Myers’ only equity theater (meaning it’s a full-blown professional theater company that employ actors from the Actors’ Equity Association).

The Rep has garnered a lot of buzz since the team announced they’d be buying the historic Arcade Theatre building—along with the entire Bradford block, which includes apartments and commercial spaces—where they’ve been leasing since 1998. The funds were raised through anonymous donors. Now, Longenhagen is tasked with shepherding the institution—with its 393-seat mainstage and more intimate ArtStage studio—into its next phase.

He was hired last October after the founder and producing artistic director, Bob Cacioppo, was ousted. When he started, Longenhagen took over the 2018-2019 programming Cacioppo established. The upcoming season, which kicks off this month with “Always…Patsy Cline,” will be the first in which Longenhagen chose all nine shows and their artistic teams. Earlier this summer, we met up with the arts leader to learn about his vision for the storied theater company.

GL: As you go into the 2019-2020 season with the theater owning the building, what do you envision for the theater’s future?

GKL: This last year has gone so fast—it’s been exciting, fulfilling, inspiring, and wonderful all at once. We’re positioned to take Florida Rep into a new era as the cultural hub of downtown Fort Myers. That said, we’re also responsible for 20 commercial units and 42 residential units, and the 110,000-square-foot parking lot. It’s a huge change, with a lot of moving parts, but I work with an amazing team and we’re up for the task.

GL: How will the purchase of the building affect your role as artistic director?

GKL: Well, the sky is the limit on what we can accomplish with this acquisition. For instance, we’re brainstorming ideas about how we can expand our education department. Last year, we reached more than 38,000 kids, and this season we hope to reach even more. We’ll have more room to work with when it comes to our classes, summer camps and teen conservatory program.

GL: Bob Cacioppo was removed from Florida Rep in the spring of 2018 after a string of allegations ranging from bullying to inappropriate behavior. Did you have conflicted feelings about taking the position?

GKL: I was extremely saddened that Bob wouldn’t be returning after our 20th season. He and his wife, Carrie, have been like family to me. But I was concerned about the fate of the theater itself. I felt that if someone from the outside came in and took the job, it would put my artistic home—and the artistic home of so many of my colleagues—in danger. I thought about it long and hard. My wife, Liz, and I talked about it and we prayed about it. I didn’t enter into it lightly when I decided to throw my hat in the ring.

GL: When did you fall in love with theater?

GKL: I was 4 years old and at the local mall with my mom and sister. There was this little puppet show — really simple, nothing fancy, a makeshift stage. It was the story of Huck Finn and Tom Sawyer. I remember sitting on the floor cross-legged with a bunch of other kids and I was mesmerized. I’ve never forgotten how powerful that experience was.

GL: How did you get into acting?

GKL: In second grade, I was cast as Postman #2 in a school play, but it was really in high school that I knew I wanted to do theater. My high school drama teacher, Bob Fahringer, was a great mentor. He would take us into Manhattan to see professional shows. Seeing theater is just as important — maybe more important — than doing theater. He taught me that. With a full scholarship, I went on to college and grad school and eventually got my masters in fine arts from the University of Pittsburgh.

GL: How did you end up in Southwest Florida?

GKL: I did the starving actor thing in New York for a while, but most of my theater work — acting, directing, teaching — was coming from regional theaters across the country. In the late ’90s when Bob Cacioppo was running the Pirate Playhouse on Sanibel Island, he saw me in a show in Pennsylvania and I sent him my headshot and resume. He cast me in a few shows during his last season there. When he created Florida Rep downtown, I was part of the original acting ensemble. It was thrilling to be a part of a brand-new theater company—an honor, really.

GL: What made you decide to stay in Southwest Florida?

GKL: A girl. I was dividing my time between working at Florida Rep and other regional theaters when I met Liz at a cast party on Sanibel. She was there with a mutual friend of ours and when she walked in, she had just come from modeling in a charity fashion show. She looked so glamorous I was scared to talk to her. A year or so later, the same mutual friend set us up. Turns out, Liz was also an actor. We were always trying to one-up each other; she was feisty, and she made me laugh. We dated for five years, but I was still traveling during the summers to work in theaters up north. I realized that I didn’t want to lose her, so I proposed. We just celebrated our 14th wedding anniversary. Our daughter, Liza, is 12 and our son, Jack, is 10.

GL: In what way will your 21-year history with Florida Rep shape your decisions going forward as artistic director?

GKL: What makes Florida Rep so unique is our ensemble of artists. We have guest directors, set designers, lighting designers, and music directors who have been coming down here from New York to work on shows for years—some for more than 20 years. We’re a family. As a member of the acting ensemble since the beginning, I intend to preserve the ensemble and the lasting relationships we’ve created with not only the artists, but with our audiences.

GL: Given the responsibilities of your new role, do you think you’ll act again?

GKL: Possibly, eventually. This season I’m directing our production of “Barefoot in the Park,” but at this point, my time is better spent steering things and being a curator of the work. I’m just as excited when enabling actors as I am being one.